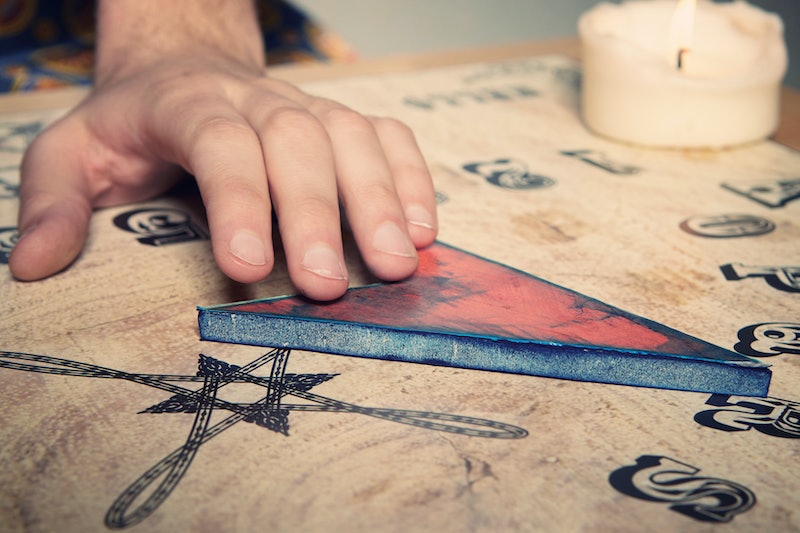 My experience of Ouija boards has been limited to a few childhood sleepovers spent laughing over one in a friend's basement. I had no clue that this alleged fortune-telling device was any more than perhaps a few decades old — but, as it turns out, the history of the Ouija board is actually both extensive and fascinating. It's not a new gimmick, but rather a very old one; in fact, I would argue that the Ouija Board's enduring popularity reveals something persistent about humans over time.

The Ouija board actually has its roots in the spiritualism of the 19th century, which itself got kicked off when two farm girls in New York claimed to be able to communicate with the spirits. In 1848, Maggie and Kate Fox (ages 14 and 11 at the time, respectively), began putting on a show of "conversing with the dead" by rapping on the wall and receiving raps back. It was enough to scare the daylights out of their parents and bring observers from far and wide. The Fox parents evacuated the "haunted" house and sent their girls to live with an older sister in Rochester.

Later, of course, Maggie would reveal that the girls had rigged up an apple on a string to produce the returned raps. Though they were just juvenile jokers and fakers, the Fox Sisters had already inspired the nation to spiritualism, and conditions were ripe for it to take off like wildfire. Rapidly-industrializing and socially tumultuous Rochester, where the girls ended up, had coincidentally become a breeding ground for new religious and supernatural beliefs.

People there took the Fox Sisters way too seriously and made them a popular sensation. New characters trickled onto the seance scene over the ensuing decades, including a spiritualist philosopher and other high-profile professed clairvoyants and seers. Americans responded well to spiritualism because it was compatible with their other religious beliefs, offered comfort at a time when loved ones were often meeting untimely deaths, and was not quite yet strongly disprovable via scientific means (though of course everyone didn't buy in; there have always been skeptics, notably among them Harry Houdini). It would be difficult to overstate how odd the mix of social pressures during the Victorian Era was, and the huge popularity of spiritualism is a testament to that.

And so the Ouija board was not invented as a novelty meant to be played by children at parties — instead, it shrewdly played to extant trends. Waiting for (fake) raps on the wall and similarly vague signs of the dead was just plain slow and boring. Impatient spiritualists had begun developing their own Ouija-type boards to speed things up and offer clearer forms of communication; indeed, as Smithsonian Magazine notes in their exploration of the Ouija board's background, the Associated Press reported in 1886 that "talking boards" had become a huge part of the spirtualist movement in Ohio. Charles Kennard of Baltimore noticed the fad, and pulled together a few investors in 1890 to start the Kennard Novelty Company for the purposes of manufacturing and selling talking boards.

The Kennard Novelty Company received a patent and trademark the next year, in 1891, and began producing the boards. The Ouija Board got its name from — what else? — a board-playing session with one of the investors' sister-in-law (an alleged skilled medium) during which the board spelled out O-U-I-J-A. This seemed like nonsense, except that the sister-in-law revealed she was wearing a locket containing an image of a woman named "Ouija." It's believed, though, that this strange word was a misreading of "Ouida," the pen name of British writer Maria Louise Ramée, who may have been depicted in the image from which the board later got its name. Got it? Great.

How do we know all of this history of the Ouija board? It's partially thanks to Robert Murch, the world's foremost historian of the Ouija board (you can even follow him on Instagram) and historian Brandon Hodge, who focuses on supernatural communication devices more generally. Today, it can be difficult to grasp the seriousness with which people once took Ouija boards and the like during spiritualism's height. Indeed, if you read the comments on Ouija board-related articles, you can see that many people still do.

More recently, scientists have been able to clearly explain how Ouija boards work (or how they don't work, really). Thanks to the "ideomotor effect," the subconscious and/or involuntary movements of humans are generally, unfortunately, susceptible to suggestion or expectations of what will happen. In other words, even though you may not be trying to push on the Ouija board's planchette to get the answer you want out of the thing, your psyche might be doing it for you with your very own hands. Even the U.S. Patent Office was apparently fooled by the ideomotor effect, having granted that the Ouija board actually works. (Of course, it granted that it works by unspecified mechanism, so do with that what you will; also, we're talking about patents from the late 19th and early 20th century, not, you know, yesterday or what have you. The times, they do change.)

On one level, it's a little disappointing to realize that our childish hopes that magic is real have once again been dashed. On another level, the ideomotor effect is almost as creepy as the idea of there really being a ghost in the Ouija machine. The Ouija board is a poignant reminder that we have full control neither over our brains nor our bodies. It also plays to people's timeless need for more information about the future than is presently available, which tells us a lot about ourselves.

Last but not least, since the Ouija Board is sold as a silly game, it gives itself cover to be taken seriously — or jokingly laughed off — as the circumstances may require. As such, the history of the Ouija board may not tell us much about getting in touch with the supernatural, but it tells us plenty about human nature.

More like this
20 Christmas Movie Quotes That'll Get You In The Holiday Spirit
By Alexis Morillo
David Tennant’s Transformation In ITV’s 'Litvinenko' Is Astonishing
By Sophie McEvoy
Think You’ve Tried Every Seltzer Flavor Out There? Think Again
By BDG Commerce
Dyson Is Dropping Futuristic, Air-Purifying Headphones
By Rachel Lapidos
Get Even More From Bustle — Sign Up For The Newsletter