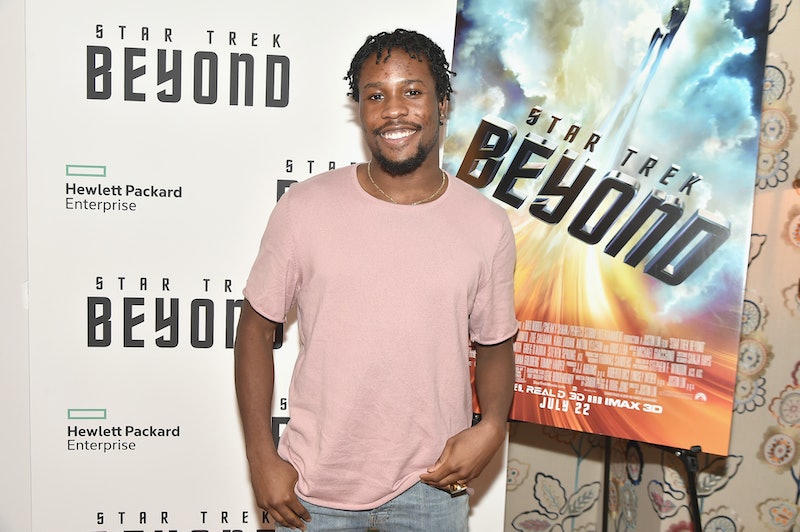 Actor Shameik Moore is having quite the year. He received rave reviews for his breakout role in the 2015 movie Dope, and is now gaining recognition for his role as Shaolin Fantastic in Baz Luhrmann's Netflix musical drama The Get Down. Next, Moore is set to appear at the 2016 MTV Video Music Awards — which leads me to wonder if is Shameik Moore single and if he will be solo at one of the biggest pop culture events of the year. MTV confirmed that the actor will indeed be at the VMAs, but there are no confirmed reports that this star-on-the-rise is taken or seeing anyone at the moment. In fact, he recently tweeted: "Ladies, if you ever see me at a party, don't be afraid to dance with me. I love to dance."

Sounds like Moore is looking for a dance partner. There's no sign of one on his Instagram account, either, so it's possible he's single and ready to mingle at the VMAs. As evidenced by Dope and The Get Down, the 21-year-old Atlanta native is a talented actor, singer, and dancer and would be quite the catch. Last year, he wowed audiences at the Sundance Film Festival as ambitious teen Malcolm Adekanbi in Dope and was named one of the "major breakouts" of the festival by IndieWire, calling him "a huge star in the making."

Here are some more reasons that Moore is Hollywood's hottest catch.

He's Got A Super Famous Friend

Moore told GQ that he still hangs out with A$AP Rocky, his Dope co-star. "That's my big bro," Moore said. "Every time he's in New York, I'm probably at his house...He gives me big-bro advice."

According to GQ, some of that advice has included the following: "To embrace my greatness, not to let anybody hold me back. To be all that I am, because I am all that I am. Stay focused."

He's Working On His Own Projects

Last year, Moore released his EP 30058, which is named for the zip code of the Atlanta neighborhood in which he grew up, according to USA Today. He recently told GQ that he's working on a movie version, as well as a full visual album, due out next year.

"I can rap, as Shaolin Fantastic. But as Shameik, I'm a singer," Moore told GQ. "I call [the music project I released] a soundtrack instead of a mixtape because the world sees me as, you know, a movie star. But I need to present another side, the real side, of me."

His Personality Is A Combination Of His Characters

In Dope, Moore played it nerdy as Malcolm, an Inglewood, Calif., teen with dreams of Harvard. In The Get Down, his character Shaolin Fantastic is totally different: a thrill-seeking, rapping bad boy. But what about real-life Moore? He told USA Today that he considers himself a combo of the two.

"I was the one that was always dancing and got along with everybody," Moore said. "But I also spoke my mind. If I didn't agree with something the teacher would say, I'd tell her, so I would get in trouble for things like that. I've always been a good/bad boy."

Before Sundance and Netflix, Moore hosted his own YouTube show called Meak's World at the tender age of 12 and the videos of his show clearly show that he's a budding star. He also danced in music videos for Soulja Boy, Keri Hilson, and Pop it Off Boyz's "Crank Dat Batman."

“Meak’s World is the world I created when I was 12, when I got into the industry,” Moore told Yahoo Movies. “I said, ‘I have to do it myself. It’s not going to be given to me. It has to be Meak’s World.’”

He Was Inspired By The Movie You Got Served

In several interviews, Moore cites the 2004 movie as the inspiration for his career. "I went in there with my hands on my belly button, and I came out sagging," he told BET. "I started doing splits and stuff on the way to the car... Hip-hop took over me after I saw the movie."

He Has A Sense Of Humor

Moore also has a background in comedy. In 2013, he starred in the short-lived Cartoon Network sketch comedy Incredible Crew, which was created by Nick Cannon. He also appeared in the sitcoms Tyler Perry's House of Payne and Reed Between the Lines.

So while Moore is possibly singe for now, this up-and-comer probably won't be available for long.