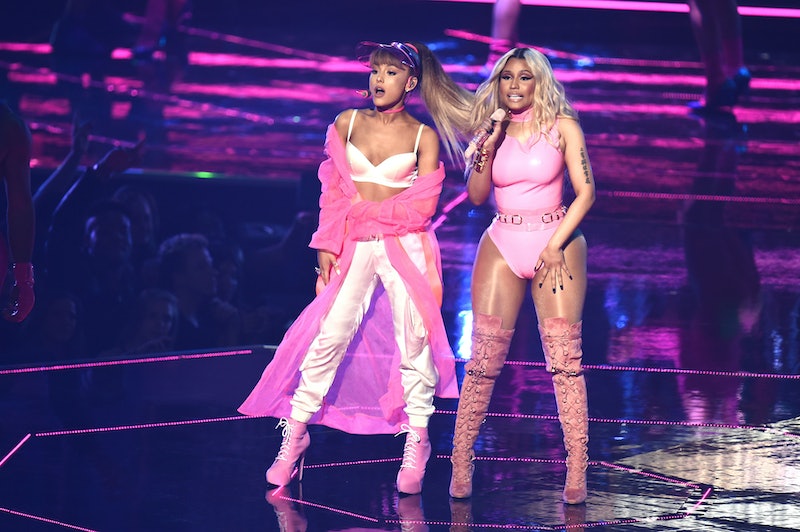 There are Hollywood award shows, and there's the MTV Video Music Awards, which is in a league all its own. Don't believe me? Just take a look at past ceremonies to see that the VMAs aren't merely an awards ceremony — they're a pop culture event that has launched memes, feuds, fascinations, and so much more. And that's probably not going to change, given all of the awkward and insane 2016 VMAs moments, which are listed here in case you blinked and missed them. You wouldn't want to be left behind when Monday morning comes and everyone is talking about it all.

2015's VMAs alone featured Kanye West declaring his 2020 run for president, Nicki Minaj taking down host Miley Cyrus, and then Cyrus closing the ceremony by dropping a surprise album alongside RuPaul's Drag Race All Stars. The show always tends to pack a pop culture punch and 2016's edition is no exception. There's no host this year, but the line-up of presenters and performers is so star-studded that you won't notice. According to MTV, presenters include Olympic gold medalists Michael Phelps and the women's gymnastics "Final Five" (Simone Biles, Gabby Douglas, Laurie Hernandez, Madison Kocian and Aly Raisman), Kim Kardashian and Kanye, Tove Lo, The Get Down's Jaden Smith and Shameik Moore, and more.

Check out all of the awkward and insane moments from the VMAs below that will surely be the talk of the internet.

Drake Is Stuck In Traffic

Drake won the award for Best Hip Hop video for "Hotline Bling," but presenter Puff Daddy had to accept the award on his behalf, because (and I quote) "Drake is stuck in traffic." Wait, what? Is that allowed?

Ari and Nicki ended their performance of "Side To Side" with this sexually empowering moment.

This Image From Kanye West's Video For "Fade"

West premiered his new music video and the ending of it cannot be unseen. What does it mean? Where do we go from here? Only Yeezy knows.

For 16 glorious minutes, Queen Bey literally lit the stage on fire performing a medley of songs from her visual album Lemonade. But the most insanely awesome moment came when she took a bat (Hot Sauce, perhaps) and broke a camera, just like during her video for "Hold Up."

Exactly. They are all of us.

Britney's back and better than ever.

Because wouldn't you? Gotta be one with RiRi.

Jay Pharoah Does His Jay-Z Impression For The Millionth Time

It's getting a little old, isn't it?

The late-night talk show host spoofed the Olympic swimmer's gas station mishap in Brazil to present the Video of the Year award. ""I couldn't tell you even if there was a gun to my head," Fallon-as-Lochte said. Yes really.

Drizzy made it to the VMAs after all! Of course, he's in time to present Rihanna with her well-deserved Michael Jackson Video Vanguard Award with a speech in which he confesses his love for her (aww!) and goes in for a kiss (whoa!). Sadly, it looks like RiRi gave Drake a cheek instead, but who can really tell?

The glamour and the insanity — isn't that the VMAs are all about? The 2016 edition of the show was definitely one not to be missed.

More like this
Watch Pete Davidson Joke About The “Really Weird” Kanye West Drama On Stage
By Brad Witter
Cardi B Explains To David Letterman Why She Uses Her Star Power For Politics
By Jake Viswanath
Kourtney & Travis Crashed His Daughter’s TikTok Live In Their 2nd Wedding Outfits
By Grace Wehniainen
Twitter Is Upset About The 'American Idol' Top 3 Results: "Who TF Is Voting?"
By Jake Viswanath
Get Even More From Bustle — Sign Up For The Newsletter