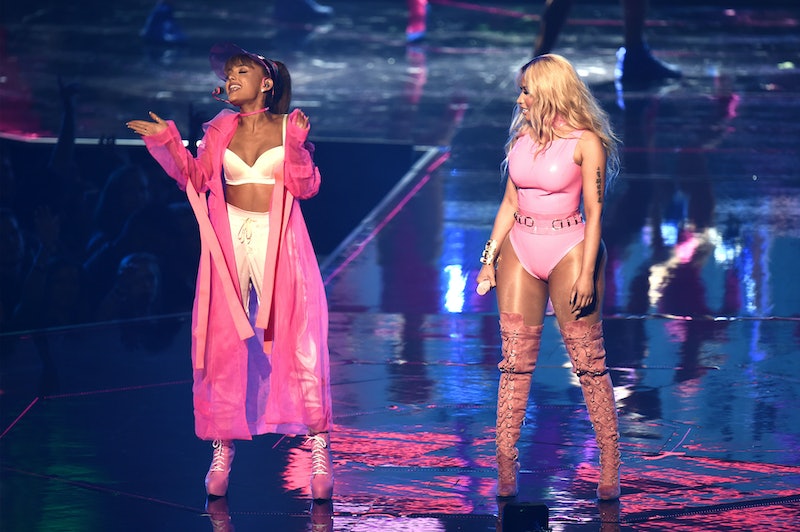 On Sunday night, the 2016 MTV VMAs boasted many amazing performances from powerhouse pop artists, but it's hard to top Nicki Minaj and Ariana Grande when you put them on the same stage. Back in 2014, the duo collaborated on Jessie J's hit song "Bang Bang" and now, Minaj is featured on Grande's new track "Side To Side" from the pop star's album Dangerous Woman. Ariana Grande and Nicki Minaj performed "Side To Side" at the 2016 MTV VMAs and it was totally sexually empowering. These two divas sure knew how to rock NYC's Madison Square Garden.

The performance began with Ari and a line of dancers riding cool pink bicycles in a rectangle of flashing lights like the ultimate SoulCycle class. The bikes could be interpreted as the literal version of Minaj's lyric from the song:

This the new style with the fresh type of flowWrist icicle, ride dick bicycleCome through, get you this type of blowIf you wanna Minaj, I got a tricycle

Make of that what you will.

Later in the song, Grande and exits the bike and climbs onto a pommel horse, reminiscent of the 2016 Summer Olympics in Rio that recently ended. Minaj then comes in, surrounded by some men dressed in hot pink gymnastics leotards and pumping iron. There was even a show of girl power when Ari and Nicki take two of the gymnast men and push their heads down and get them to kneel. Yup, that just happened. Suggestive? Sure. Empowering? Totally.

There's really no way this combo wasn't going to be awesome. Grande announced the performance with a series of videos on her Instagram account, featuring some fun art by illustrator Hattie Stewart. "When you take the stage at the VMAs, you step into another world," she says in one of the videos. "The drama, the design, the artistry ignites a fire. This kind of energy perpetuaties creativity and gives me the power to share my voice in a way that's never been heard before. Because it's not just a performance, it's a statement."

And boy did Grande make a statement with Minaj on Sunday night, by owning the VMA stage during their performance.

More like this
Pete Davidson Mentioned Kanye West & Ariana Grande In His Last 'SNL' Sketch
By Grace Wehniainen
Kim Kardashian Reacts To Kanye West’s Diss Song “Eazy” On 'The Kardashians'
By Jake Viswanath
Britney Spears Met The Weeknd & Sam Levinson, So She May Actually Be On 'The Idol'
By Jake Viswanath
Twitter Has Very Mixed Feelings About The New 'American Idol' Winner
By Jake Viswanath
Get Even More From Bustle — Sign Up For The Newsletter