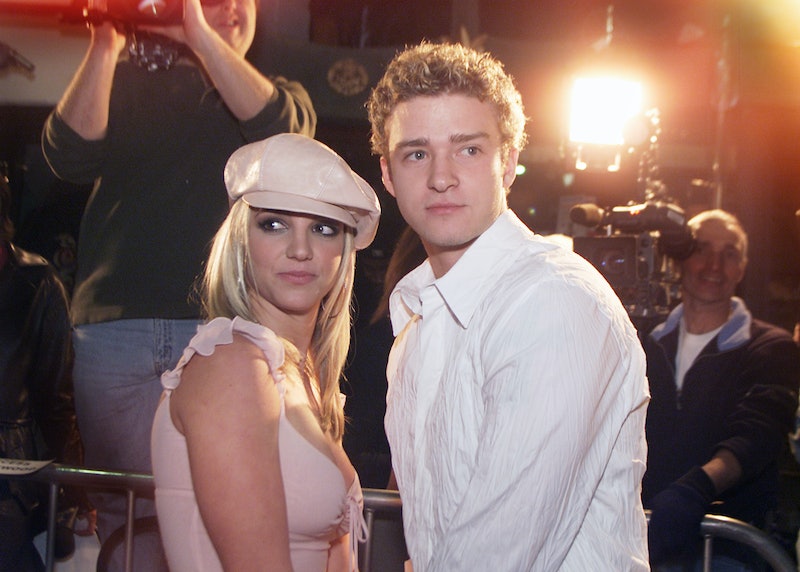 Way back, when I was just a young and impressionable child of 11, I believed that Britney Spears and Justin Timberlake's love was the stuff of epic romance novels and fairytales. So you could imagine my disappointment when they broke up, not-so-amicably, and Timberlake subsequently up and wrote a scathing yet catchy song seemingly about her that ensured things were over for good. Now that Spears' album Glory is released, though, did she finally put out a rebuttal to her ex-boyfriend's "Cry Me A River" jab? Is Spears' song "Liar" about Timberlake?

I will say that the beginning notes of the song do give off a very similar vibe to the low bass humming in "Cry Me A River." So, you know, do with that what you will. After that, though, the sound departs from that of Timberlake's song greatly. If I were to produce a song to get back at my ex, I'd probably make the connection just obvious enough for people to speculate that it's a nod, but still subtle enough keep people guessing. So, if that's her game here, she's totally winning it.

But before I start churning the rumor mill, let's dissect the lyrics first. I like juicy gossip as much as the next person, but we should probably be careful before stirring up drama that's been buried for 14-ish years. For the sake of uncanny coincidences though, let me highlight why I think this song could be about my beloved JT.

The chorus of Brit Brit's song goes like so, according to Genius:

Which, oddly enough, seems to reference multiple claims from Timberlake's song. Spears' song flips the "call me on the phone" line on its head. She insists he's the one who's calling, and that she's "never gonna come" regardless of his begging. Perhaps another stealthy reference to "Why did you leave me all alone?" But more than that, it's her direct usage of the word "cry," which, as we know, played a pivotal role in Timberlake's song not only because it's in the title and used almost to excess in the lyrics, but because in the tune, he sings in a way that is meant to sound like he's actually crying.

But you can take a better look at the verse I'm referring to from "Cry Me A River", per Genius, below, and decide for yourself if the connection is strong enough:

You told me you love meWhy did you leave me all aloneNow you tell me you need meWhen you call me on the phoneGirl I refuseYou must have me confused with some other guyThe bridges were burnedNow it's your turn, to cryCry me a river (x4)

One other strong checkmate kind of vibe I got from Spears' song in reference to Timberlake's is her proclamation "You know I know that you know I know/That you're a liar, a liar." Why is that? Well, take a look at these lyrics from "Cry Me A River":

When you compare Timberlake's line with Spears', it's kind of hard to ignore the way hers fits so well in this context that it could be conversationally used as a direct response to that accusation. But that's not all. I saved the most damning evidence for last.

In the first verse of "Liar" B. Spears sings this:

Which, you know, is a big deal when you remember that Timberlake himself sang this:

The bridges were burnedNow it's your turn, to cry

Well, there you have it. Am I saying that "Liar" is definitively Spears' way, way, way late to the game bite back at "Cry Me A River"? Honestly, I don't know. All I'm saying is, there are, in fact, some coincidences too strong to ignore. ¯\_(ツ)_/¯

More like this
Britney Spears Set A Wedding Date With Fiancé Sam Asghari & Previewed Her Dress
By Bustle Editors
Britney Spears & Sam Asghari Announced Their “Devastating” Pregnancy Loss
By Stephanie Topacio Long
Spice Girls’ Net Worth: The Richest Member Is Wealthier Than The Rest Combined
By Hugh McIntyre
20 Celebrity Couples Who You Forgot Dated In 2002
By Jake Viswanath
Get Even More From Bustle — Sign Up For The Newsletter