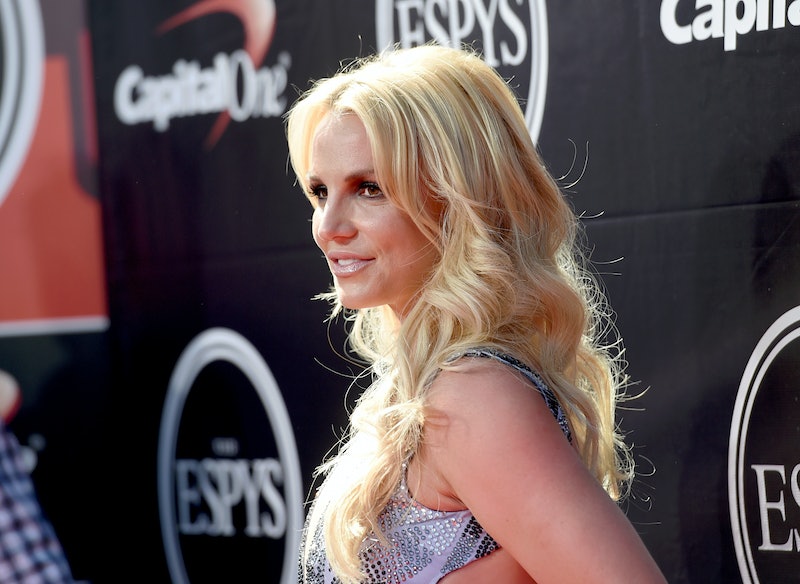 It's finally here, the moment we've all been waiting for: Britney Spears' first album in years, Glory, is out. Now that the tracks are finally in our grasp, it's finally possible to note all of the lyrics, the meanings of each song, and the references they seem to make. For instance: compare Britney Spears' "Liar" and Justin Timberlake's "Cry Me A River." Maybe you didn't even realize you were waiting for Spears to craft a retort to Timberlake's 2002 song about the end of their relationship back in the day, but the moment you hear "Liar," you'll realize it's just as cutting, and just as unforgiving as "Cry Me A River" — so it absolutely could be.

The year 2002, of course, was the one Timberlake and Spears broke up after three years together, and Timberlake's song didn't let you forget it with lyrics referencing a relationship that ended because of alleged infidelity, and a video starring a Britney Spears lookalike. Though back in the day it wasn't too hard to put together the pieces, after years of questions, Timberlake finally admitted in December 2011 that "Cry Me A River" was inspired by his own relationship; he wrote it after a particularly trying phone conversation.

Not that we really needed the confirmation, because come on, but it does make a big difference hearing the song and watching the video. To Spears' credit, that same feeling comes through just as strongly on "Liar," a track on her ninth studio album Glory, which was released Friday. Like "Cry Me A River," "Liar" clearly discusses an ex, and there are just too many references to "Cry Me A River" to ignore.

Putting aside the fact that she's accusing an ex of telling lies about her, and suggesting it happened a while ago because of her use of the word "hindsight" — did you catch that "bridges you burned" reference? Sound familiar? That's because Timberlake has a very similar line in "Cry Me A River":

You told me you love meWhy did you leave me all aloneNow you tell me you need meWhen you call me on the phoneGirl I refuseYou must have me confused with some other guyThe bridges were burnedNow it's your turn, to cryCry me a river

Oh boy. There's really no mistaking that reference, but even if you did, Spears also sprinkles the word "cry" liberally through the chorus, just to drive home the connection.

Pretty strong words, but then again, if it is about Timberlake, then Spears has had 14 whole years to think about her response, so I guess we shouldn't be surprised if she wants to set the record straight. After all, later, in the pre-chorus, Spears sings, "It's too late for apologies / nothing you can offer me now." That sounds like someone who just wants to set the record straight.

And while I'll be bummed if Spears has spent this entire time feeling like the story was twisted, I can't help but feel like "Liar" was worth the wait, because damn, is it catchy. Spears shared with Rolling Stone in 2003, that when she asked Timberlake why he put out "Cry Me A River," he said, "Well, I got a controversial video."

"And I was like, 'You did. [Claps her hands, as if for a dog that just performed a trick.] Yay for you.' So he got what he wanted. [Clears throat] I think it looks like such a desperate attempt, personally. But that was a great way to sell the record. He's smart [laughs]. Smart guy."