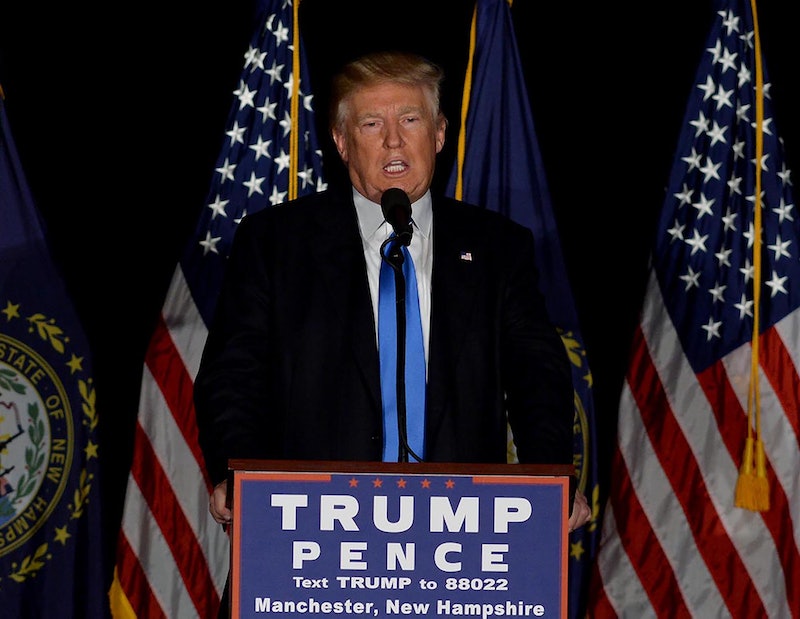 Based on his latest campaign changes, Republican presidential nominee Donald Trump seems to have high tolerance for men with bad histories of behavior towards women. Towards the beginning of the campaign, red flags were already popping up, thanks to supporters like Bob Knight and Mike Tyson. Now, Steve Bannon is the latest tie to this type of behavior as reports of the Trump campaign CEO's domestic abuse allegations resurface. In the case of the accusations against Trump's now-CEO, the domestic abuse allegations were dismissed when his wife didn't show up for court, as reported by Politico.

Of course, a presidential candidate can't always be responsible for the people who support him or her, but in Trump's case, he not only seems to attract those who have been abusive or accused of being abusive towards women, but has actively recruited such personalities. Trump caught some deserved heat when Knight, the former University of Indiana basketball coach, endorsed him — and he heartily paraded Knight's seal of approval. The coach still holds celebrity status in Indiana for leading the flagship university to multiple college basketball championships. Another thing he's famous for is outlandish and inflammatory rape comments he made to NBC's Connie Chung in 1988; in an interview with her, he said, "I think that if rape is inevitable, relax and enjoy it."

Knight ultimately back-tracked, adding, "That's just an old term that you're going to use. The plane's down, so you have no control over it. I'm not talking about that, about the act of rape. Don't misinterpret me there. But what I'm talking about is, something happens to you, so you have to handle it — now.'' But, shockingly, his remarks didn't sit well with people.

So, Knight is the same person who is now reaching out to the Republican nominee because, according to an interview with Time, "I just told him I thought that we needed him ... that right now, in this moment in time, he was the man who should be in charge. He should be the guy that can get us back to where we want to be." Back to when, Bob? Back to the 1980s when it felt OK to say out loud that women should "relax and enjoy" rape?

Mike Tyson has also gotten behind Trump — despite his apparent best interests. A cornerstone of Trump's campaign has been his promise to single out and employ "extreme vetting" for Muslims trying to enter the country. Tyson converted to Islam when he was in prison. Which reminds me, um... remember when Tyson was in prison? It was in 1992, after Tyson was convicted of raping a beauty pageant contestant, Desiree Washington. His defense? "How do you rape someone when they come to your hotel room at two in the morning?" Tyson wrote in his defense, according to Mother Jones. At the time of the conviction, the Republican presidential nominee actually argued that Tyson should not go to prison for raping Washington, but should instead work out a deal so Tyson could just pay the victim off.

It's important to make the distinction that these remarks are coming from and these accusations are coming against Trump's supporters and staff, not him. However, we're certainly entitled to evaluate people — especially presidential candidates — by the company they keep.