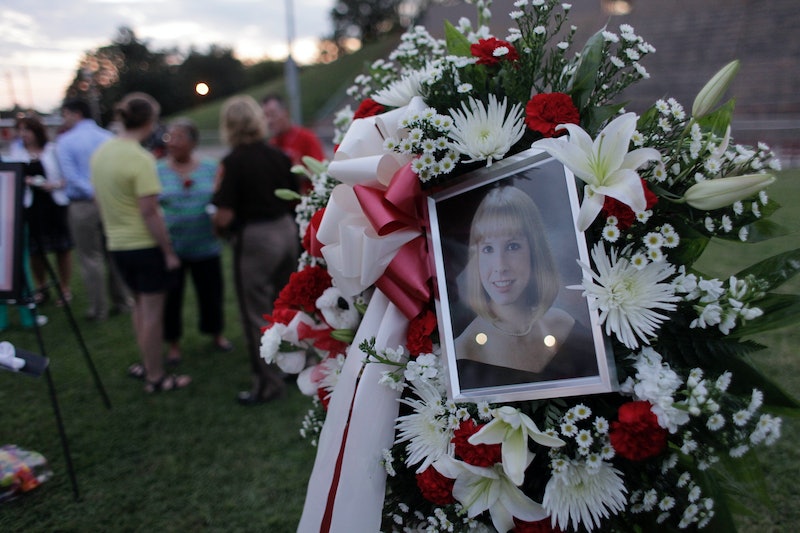 One year ago on Aug. 26, 2015, WDBJ journalist Alison Parker and cameraman Adam Ward were shot and killed during a live TV broadcast in Roanoke, Virginia. Parker was conducting an on-air interview that morning with Vicki Gardner, the tourism official of Smith Mountain Lake, when a former WDBJ employee approached them and opened fire at Parker and Ward. One year after the tragic shootings, Parker's family paid tribute to her life on the anniversary of her death.

The news station, which has since changed management, marked the deaths of Parker and Ward with a moment of silence on the air, CNN Money reported. Since her death, Parker's mother Barbara has put her grief into action, calling for changes to existing gun legislation and working to end gun violence. She told People, "You have a choice when something like this happens. You can curl up in a fetal position and just close out everything or you can get angry — and that's what we did."

While Parker's mother has spent much of the last year organizing and advocating to end gun violence, by meeting with President Obama and attending marches and actions across the country, the Parker family took a break the week of the one-year anniversary of their daughter's death. The family, along with Parker's boyfriend, Chris Hurst, a news anchor at WDBJ, went on a week-long trip to North Carolina on the Nantahala River where they went rafting and hiking, CNN Money reported.

In a phone interview on Thursday, Hurst told CNN Money, "This is where she came every year for her birthday," noting that a trip to the Nantahala River is one of his last memories with Parker. He added that he expected Friday would be a "very difficult day because it reminds us of how she died and how utterly inhumane it was," CNN Money reported.

Parker's mother Barbara told People how Hurst has helped the family keep their daughter's memory alive. She explained how Hurst is like another child to the family and that they do things together often. She told People, "Their relationship was blossoming. He goes home to their apartment every day. I don't know how he does it. He's a very strong person."

Last year after the shooting took place, CNN reported on the importance of covering violence in the workplace, which is what the murders of Parker and Ward were. According to a report from the Centers for Disease Control and Prevention (CDC) and the National Institute for Occupational Safety and Health (NIOSH), workplace violence is a serious issue facing American employees. They reported that on any given week "an average of 20 workers are murdered and 18,000 are assaulted while at work." However, we don't usually tend to hear about these cases of violence on a national level.

One year later, the Parker family remembered their daughter while also continuing the fight against gun violence. Parker's mother Barbara told People, "[My husband] and I have always been horrified by the gun violence in this country but we never went out and did anything to fight it until we lost Alison. We didn't think this could happen to us, but it did. It's now our job to try and prevent it from happening to anyone else."