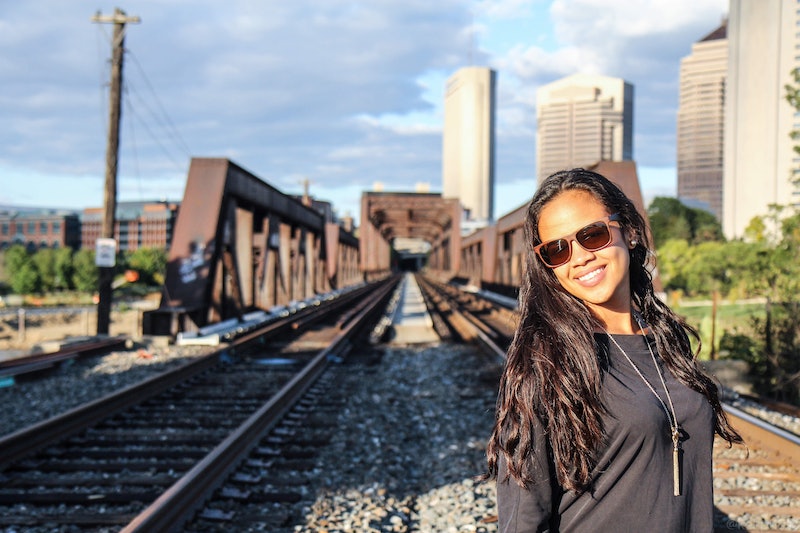 They say that smiling is good for you, and it turns out it might also be able to protect you from prejudice. A new study suggests that smiling makes people less likely to stereotype you based on your race or gender. Which is important, because studies show stereotypes are still very much a thing in today's world. Now if only a smile could also dismantle all the systemic problems that women and people of color face in our society — ideally without people telling us that we should smile when we don't really feel like it.

In a new study published in Motivation and Emotion , researchers asked participants to view a series of photographs, some of white men, some of white women, some of Japanese men, and some of Japanese women. Half of the models were depicted as smiling, while half were photographed with a neutral expression. The participants were then asked to rate each person in the pictures on several personality traits.

The researchers found that when rating each face, participants showed evidence of a lot of unconscious stereotypes concerning race and gender. For instance, Japanese women were, overall, rated as less extroverted than white women, and white men were seen as less agreeable than white women. However, the interesting thing is that these stereotypes were only found among participants who looked at neutral faces. Among participants who looked at the smiling faces, these sorts of biases weren't evident at all.

In other words, smiling seems to make people see you in a less stereotypical manner.

So how could this possibly work? The theory is that it happens because people's first impressions are typically based on very little information. Psychologists call this phenomenon "thin slicing," because you're relying on very thin evidence. Nevertheless, the way our brains work, we immediately use that thin evidence to begin forming broad generalizations about the person on question. And facial expression is, naturally, a big part of those evaluations. After all, it's one of the few data points available in a first impression.

Therefore, the researchers theorize, if someone is smiling, that gives the person looking at them for the first time more data to work with in evaluating them — which means the brain doesn't rely as heavily on other data points, such as race and gender. And thus, stereotypes don't play as much of a role in assessing a new person.

So does this mean you should go around beaming at every job interview? Not necessarily.

It's worth noting that in this study, participants were really only looking at faces, meaning they already didn't have much to go on when forming first impressions. They couldn't see the person's full outfit or body language — or, in the case of a job interview, their résumé. So it makes sense that facial expression would play a huge role, since it made up a disproportionate amount of possible information.

Basically, we can't rely on a smile to protect us from racism or sexism — but then again, you probably could already guess that. After all, if it were that easy, we'd have done it by now.

However, this does suggest that, if you want to avoid being stereotyped, there are things you can do. Namely, you can use facial expression or other signals like clothes, hairstyle, body language, and accessories, to give people enough information to work with that their first impressions don't rely on stereotypes. And while that is probably too much work to put in on a daily basis, for important occasions like job interviews, it's worth keeping in mind.

Some day, we will (hopefully) live in a world where people don't judge others based on race or gender, or regularly tell other people that they need to arrange their faces in a manner they find more pleasing than another. In the meantime, we all need to get hired — so go forth and use that smile strategically. As long as that's what you yourself want to do.

More like this
25 Quotes About Love To Share During Pride Month 2022
By Madeleine Aggeler and Emma Garza
5 Crystals To Manifest More Money
By Megan McCarty
Sandra Bullock, Girlboss Extraordinaire
By Matt Harkins & Viviana Olen
11 Trends From The ‘90s That Made You Feel So Cool
By Julie Sprankles
Get Even More From Bustle — Sign Up For The Newsletter