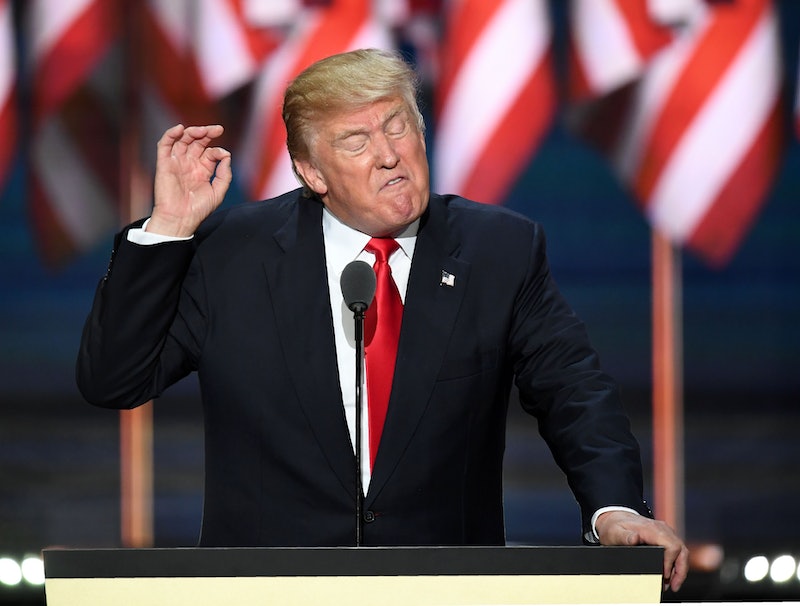 In a speech in Reno, Nevada last month, Hillary Clinton grabbed the bull by the horns, so to speak, and called out the irresponsible rhetoric that's being spewed from the megaphone of her Republican counterpart. Clinton sharply denounced Donald Trump, saying "He's taking hate groups mainstream and helping a radical fringe take over one of America's two major political parties." That is the crux of the many fears and problems with a President Trump — the mainstreaming of abhorrent, unacceptable views of women, immigrants, Muslims, and many other groups. To prevent that, every millennial needs to vote.

Millennials, a demo that has a reputation for not voting, could make up, according to the Pew Research Center, over 69 million voters — if they all register and actually go to the polls on Nov. 8. As Pew Research Center noted, millennials have "now have caught up to the Boomers when it comes to their share of the American electorate." Those kinds of numbers are especially crucial when it comes to this fight — because the other reputation millennials have? Being the most progressive — and, thus, the antithesis of the values that Trump's campaign preaches.

A 2014 survey of millennials conducted by the polling firm Harstad for the Youth Engagement Fund and Project New America, found 75 percent of millennials thought the government should be "protecting the rights of women" and 69 percent thought the government should be "protecting the rights of minorities." The poll also showed 83 percent of millennials favored gun background check and 69 percent favored to "leave the decision on abortion up to the woman." Millennials are the generation who should find Trump and his repeated misogynistic words and actions — let alone his remarks after the Orlando Pulse nightclub attack that people in the club should've "had guns strapped ... right to their waist or right to their ankle" — most vile and, thus, feel most compelled to put a stop to his campaign.

Millennials are the generation who will likely find Trump's rhetoric about undocumented immigrants the most repellent. A survey by the Public Religion Research Institute found 68 percent of young adults "say that immigrants strengthen American society," as noted in a Washington Post report. That kind of favorable attitude towards immigration flies in the face of the fear-mongering of outsiders that Trump has relied on so much throughout the campaign. By the way, that positive view of immigrants is dramatically more prevalent among the younger cohort. The Washington Post also noted "only 42 percent of their elders agree with it."

Millennials may very well be the group of American voters that most clearly understands the grave problems of a Trump presidential victory. And with their numbers, they have the pull to keep the United States and the world from a President Trump, a man whose presidency could legitimize the disrespect and hate of women, minorities, and immigrants. Millennials, this is a candidate who clearly defies the majority of our values. It's our responsibility to vote and stop him.