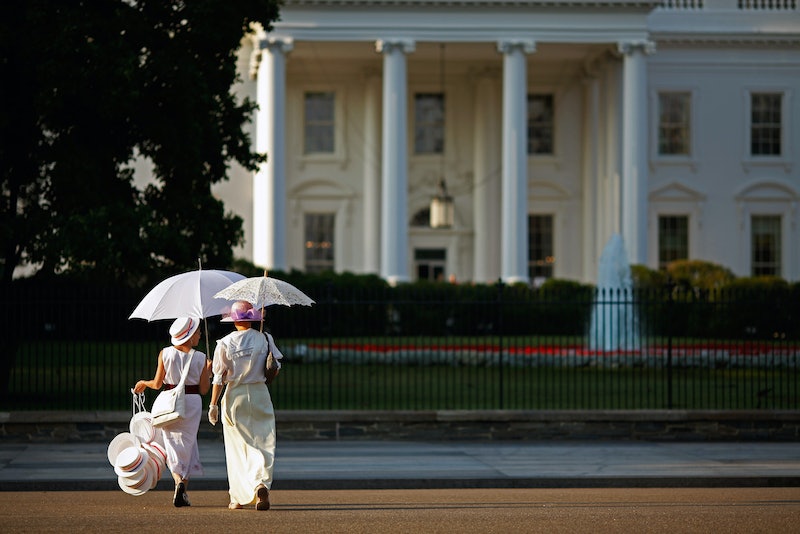 For many women casting ballots in elections today, stories of the fight for women's suffrage in America are exactly that: stories gleaned from history books and long-forgotten school lessons. While many of us recall the courageous and trailblazing women behind the decades-long push to secure women the right to vote when we slip into the voting booth to weigh in on local ballot measures and elect city, state, and federal leaders, the anniversary of the 19th Amendment's formal adoption provides another opportunity to pay tribute to those that made women's vote count. To celebrate Women's Equality Day, let us reflect on the women's suffrage movement through the inspiring words of some of its key suffragists.

While women made up the majority of voters in the 2012 election — casting 53 percent of ballots, according to exit poll data analyzed by the Center for American Progress — they were shut out from the polls altogether just a century ago. It took more than half a century of tireless work for American women to secure the right to vote.

One of the earliest efforts came during the 1848 Seneca Falls Convention in New York, where a resolution in favor of women's suffrage was passed despite convention organizers' holding conflicting opinions on the issue. Suffragists would continue to push for women to be given the right to vote over the next 72 years until the 19th Amendment was adopted on Aug. 26, 1920.

In celebration of Women's Equality Day and the ratification of the 19th Amendment, here are 10 inspiring quotes from American suffragettes:

"The world has never yet seen a truly great and virtuous nation because in the degradation of woman the very fountains of life are poisoned at their source."

"The older I get, the greater power I seem to have to help the world. I am like a snowball – the further I am rolled the more I gain."

"The moment we begin to fear the opinions of others and hesitate to tell the truth that is in us, and from motives of policy are silent when we should speak, the divine floods of light and life no longer flow into our souls. Every truth we see is ours to give the world, not to keep for ourselves alone, for in so doing we cheat humanity out of their rights and check our own development."

"Now all we need is to continue to speak the truth fearlessly, and we shall add to our number those who will turn the scale to the side of equal and full justice in all things."

"I always feel the movement is a sort of mosaic. Each of us puts in one little stone, and then you get a great mosaic at the end."

"The vote is the emblem of your equality, women of America, the guarantee of your liberty. That vote of yours has cost millions of dollars and the lives of thousands of women. Money to carry on this work has been given usually as a sacrifice, and thousands of women have gone without things they wanted and could have had in order that they might help get the vote for you. Women have suffered agony of soul which you can never comprehend, that you and your daughters might inherit political freedom. That vote has been costly. Prize it! The vote is a power, a weapon of offense and defense, a prayer. Understand what it means and what it can do for your country. Use it intelligently, conscientiously, prayerfully."

"Let women issue a sexual declaration of independence and absolutely refuse to cohabit with men until women are acknowledged as equals in everything, and the victory would be won in a single day."

"I do not believe in sex distinction in literature, law, politics, or trade - or that modesty and virtue are more becoming to women than to men, but wish we had more of it everywhere."

"I’d rather go down in history as one lone Negro who dared to tell the government that it had done a dastardly thing than to save my skin by taking back what I said."

"When I see the elaborate study and ingenuity displayed by women in the pursuit of trifles, I feel no doubt of their capacity for the most herculean undertakings."