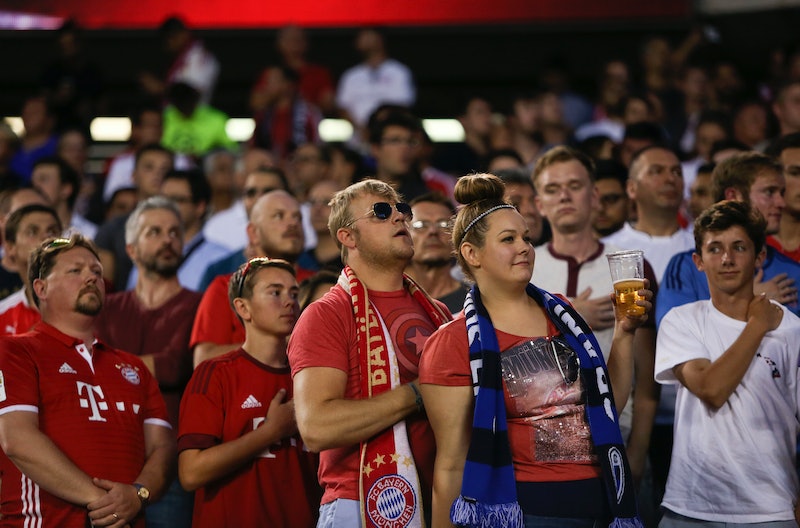 While there may be some debate over whether or not etiquette requires you to place your hand over your heart as the U.S. national anthem plays, there's no arguing it's considered a major faux pas to not stand at attention. San Francisco 49ers quarterback Colin Kaepernick refused to stand for the national anthem Friday evening during a pregame ceremony held ahead of a preseason game against the Green Bay Packers. But Kaepernick didn't miss the cue to stand, he remained seated in a deliberate act of protest. His action didn't go unnoticed, drawing criticism and debate from both fans and his fellow professional athletes.

While some of Kaepernick's fellow athletes took to Twitter during his game to accuse the quarterback of hating the country he lives in, Kaepernick said he was protesting what he called the wrongful treatment of African-Americans and minorities. "I am not going to stand up to show pride in a flag for a country that oppresses black people and people of color," Kaepernick told NFL Media after Friday's game. "To me, this is bigger than football and it would be selfish on my part to look the other way. There are bodies in the street and people getting paid leave and getting away with murder."

Kaepernick is unlikely to face punishment from the NFL for his act of protest. In a statement issued Saturday, the league clarified that players "are encouraged but not required to stand during the playing of the National Anthem." The San Francisco 49ers also stood by Kaepernick, saying the quarterback had the right to freely express himself. "The national anthem is and always will be a special part of the pre-game ceremony," the team said in a statement to Pro Football Talk. "It is an opportunity to honor our country and reflect on the great liberties we are afforded as its citizens. In respecting such American principles as freedom of religion and freedom of expression, we recognize the right of an individual to choose to participate, or not, in our celebration of the national anthem."

Friday wasn't the first time Kaepernick has waded into hot-button political issues. The quarterback often tweets about civil rights issues and said that while he was well aware of the controversy his protest would cause, it was more important to him to take a stand (or in this case, a seat). "This is not something that I am going to run by anybody," he told NFL Media. "I am not looking for approval. I have to stand up for people that are oppressed. ... If they take football away, my endorsements from me, I know that I stood up for what is right."