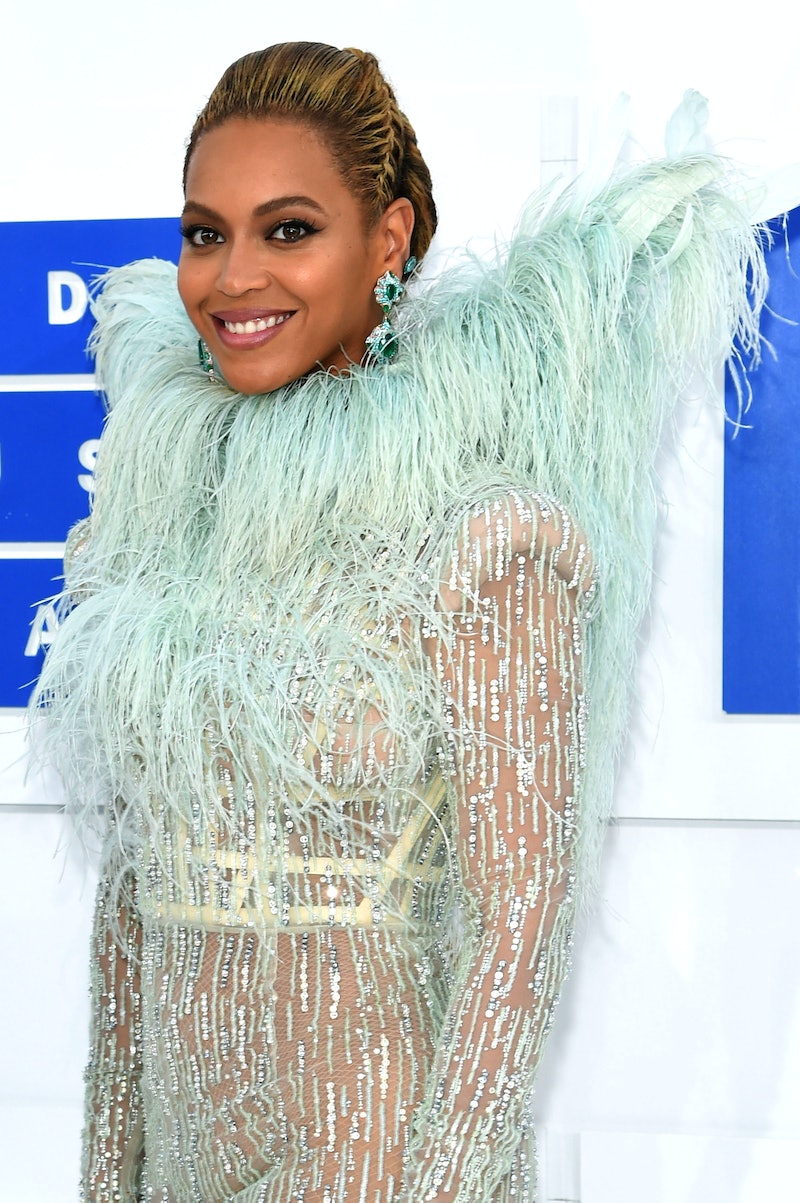 Queen Bey has been rocking the VMA red carpet since her Destiny's Child days in the '90s, so she definitely knows what she's doing. Which is why it will come as no surprise that Beyoncé's 2016 VMAs outfit absolutely stole the show when she arrived wearing an angelic, grayish-blue sequined dress complete with very elaborate feathered shoulder pads.

For the 2016 MTV Video Music Awards, Beyoncé brought a very stylish date — none other than her adorable daughter Blue Ivy, who rocked a very glam bedazzled headband and a little bronze sequin and tulle dress. Beyoncé complemented her extravagant gown with a pretty braided up-do and a pair of green earrings.

Beyoncé has 11 VMA nominations this year, which is the most nominations for an artist this evening, and the queen's personal record, so it makes sense that she would want to absolutely slay on Aug. 28. After all, she's basically guaranteed to win a few Moon Men, so she probably wants to look flawless (yes, I went there) when she accepts her award(s).

Over the years, Beyoncé's VMA outfits have run the gamut, from coordinating leather corsets with her Destiny's Child bandmates, to the sequined blazer she wore to reveal her pregnancy in 2011. Her 2016 VMAs look is definitely one of her best outfits to date.

People will undoubtedly remember this look.

How cute are they!?

But, of course, because she’s Beyoncé, just one outfit wasn’t enough. After her performance, Bey accepted her award for Video Of The Year for "Formation" in a sheer white dress that was very reminiscent of a wedding gown.

Earlier in the evening, Beyoncé also accepted an award for Best Female Video Of The Year for "Hold Up," rocking a gold jumpsuit with a cape over it to remind us that she is literal royalty.

More like this
Here Are All 703 Outfits Rachel Wore On Friends
By Kat George
The 2023 Grammy Nominations List Is Full Of Surprises
By Jake Viswanath
Twitter Can’t Get Enough Of Lewis Capaldi Creating Fashion Looks For ASOS
By El Hunt
4 Chic Outfits To Wear With Loafers, According To A Fashion Editor
By Bella Gerard
Get Even More From Bustle — Sign Up For The Newsletter