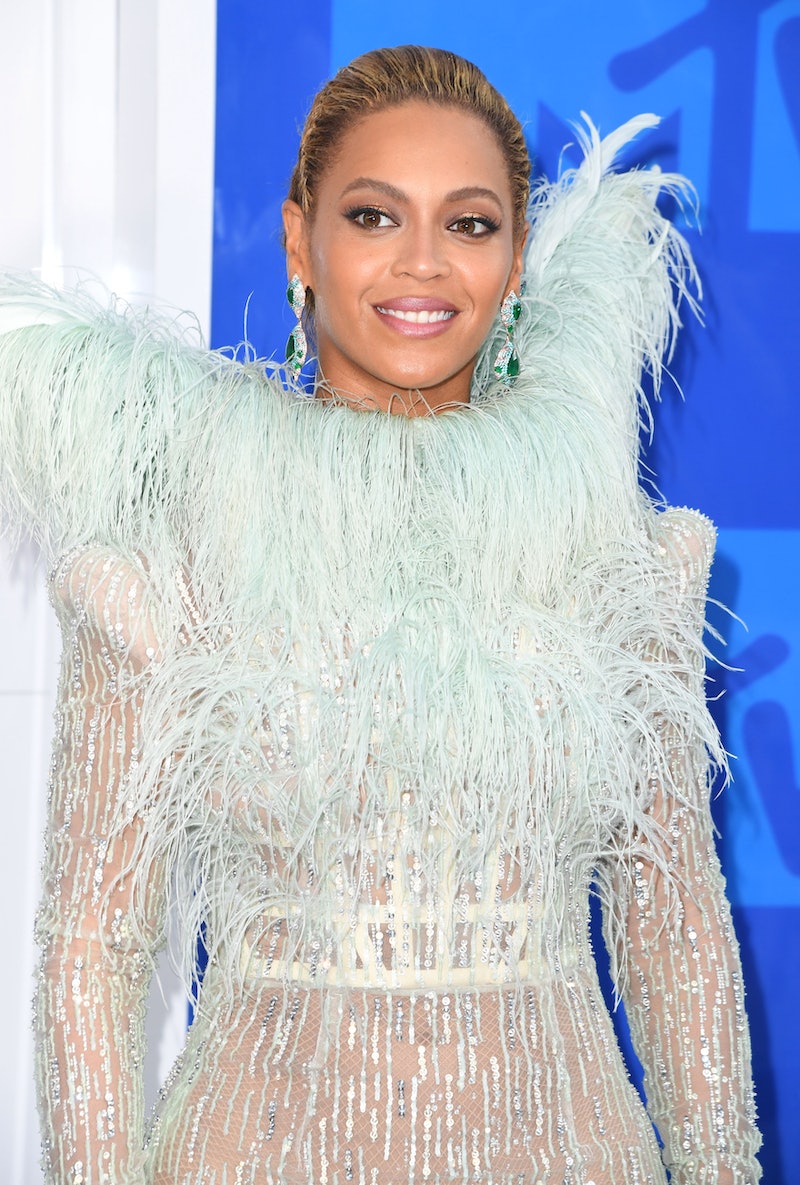 It just would not be the MTV Video Music Awards without a few surprises, and Beyoncé delivered the best kind. In other words: Beyoncé performed at the 2016 VMAs on Sunday, Aug. 28, and completely owned the ceremony. Like, so much so, that I'm pretty sure we all need to bow before Queen Bey and get into formation to give her the accolades she deserves.

In the days leading up to the VMAs, despite earning 11 nominations for her masterpiece Lemonade, it did not look like Beyoncé would be on stage doing anything other than collect awards this year — but Bey knew she had to give the public what they wanted: a show-stopping performance of some of her best Lemonade songs including "Pray You Catch Me," "Hold Up," and "Sorry" alongside the most intricate stage work of the 2016 VMAs.

In true Beyoncé fashion, her performance was a powerful, pure, and flawless spectacle all at once. At one point Bey even took a bat to the camera. The crowd could not resist getting on their feet and the Twittersphere lost their collective mind. Who could blame them when Bey was bringing a major taste of Lemonade to life right before their eyes? Lemonade was a musical experience like no other, but Beyoncé proved at the VMAs Lemonade is just as good when served live as it is in video form.

From her killer costume — a white cape over an amazing lace black bodysuit — to her unquestionably awesome vocals, Beyoncé dominated with her Lemonade medley. Seeing her walk straight up to camera and shout, "Who the f*ck do you think I am?" was nothing short of history making. Also, there were flames! So many flames. Beyoncé did not just perform, she put on a show with a powerful shot of feminism.

With their looks echoing the style of the Lemonade video, Beyoncé and her backup dancers looked fierce, poised, and ready to conquer the world with their sheer coolness. She even included the poetry from her visual album Lemonade between songs, making her performance a mini-live version of the visual album that captured the world's imagination in 2016. Beyoncé saved "Formation" for last because how could she not? By the end Bey got a standing ovation from her peers and probably from the viewers at home too.

Queen Bey and her crew made the 2016 VMAs unforgettable and brought Lemonade to vivid life in the process. The night belonged to Beyoncé and she slayed it as only she could.

More like this
60 Empowering 'Renaissance' Lyrics That Make Perfect Instagram Captions
By Catharina Cheung
Lil Nas X, Jack Harlow, & Harry Styles Lead The 2022 MTV VMAs Nominations
By Jake Viswanath
Beyoncé Is The First Woman To Have A No. 1 Album Since Adele Did Almost A Year Ago
By Radhika Menon
Beyoncé & Madonna’s “Break My Soul” Remix Honors A Group Of Black Icons
By Stephanie Topacio Long
Get Even More From Bustle — Sign Up For The Newsletter