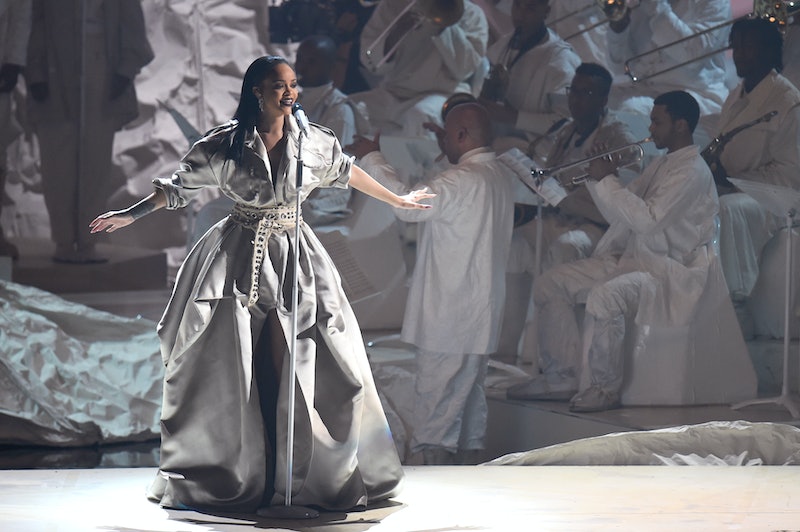 I didn't think anyone could upstage Drake presenting Rihanna with her Video Vanguard Award at the 2016 Video Music Awards. That was, however, until the woman of the hour took the mic herself. RiRi crushed the show all Sunday night, performing fan-favorite hits throughout the evening while wearing outfits only she could pull off. In her Video Vanguard Award speech, Rihanna expressed how taken back she was receiving such an honor at only 28 years old. But what made the speech so incredible was the fact that she didn't totally make it about her.

Of course, she talked about how huge of a milestone this night was for her career and her country, but she took a moment to look to those who don't get the credit she feels they deserve. "My success, it started as my dream," she said. "But now my success is not my own, you know? It's my family's. It's my fans'. It's my country's. It's the Caribbean as a whole. It's women. It's black women. So many people feel like their little piece is such a major part of this puzzle."

The singer also spoke to how much she's grown over the last 11 years in the business, and after watching her graciously accept this award, I can't wait to see what other incredible things she'll do with her talent.

Read the rest of Rihanna's amazing speech below:

"MTV, this is such an amazing night. It's such an amazing moment in my career. When I think about the Vanguard Award and receiving this tonight, all I could think of was my country. They're going to be so proud. This is the first Vanguard to land anywhere close to my country. And so, you know my success, it started as my dream. But now my success is not my own, you know? It's my family's. It's my fans'. It's my country's. It's the Caribbean as a whole. It's women. It's black women. So many people feel like their little piece is such a major part of this puzzle. And I have to thank you guys for supporting me over and over. Thank you to every director who has taken a chance on me and a chance with my crazy ideas. There's just so much growth that has happened over the last 11 years, and I can't believe I am receiving the Michael Jackson Video Vanguard Award at 28 years old. It's crazy, and I have so many people to thank. I mean, from the very beginning, Evan and Carl from SRP, you guys believed in me, you brought me straight to Jay Z's office, where I met Jay, Tata, LA Reid, Jay Brown, my whole publicity team, my glam team, so many people, man, they right with me from day to day. My best friends never left me. They actually followed my ass all the way to America, gettin' on my damn nerves, and they here right now just witnessing this. This is a big moment. Thank you Drake for that amazing speech. Thank you MTV, I had so much fun! Goodnight."