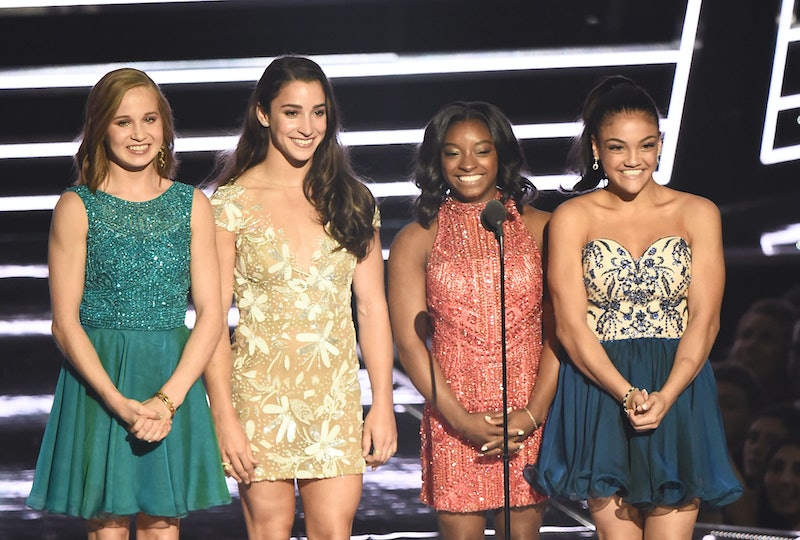 Apart from BeyonSLAY's killer performance and Drake confessing his love for Rihanna, the Final Five — and their fangirling over celebrities and celebrities fangirling over them — were my favorite part of the VMAs. And of all of the selfies Aly Raisman, Simone Biles, Laurie Hernandez and Madison Kocian took with all the stars (Gabby Douglas was unfortunately recently hospitalized and had to miss out), the best one by far was Hernandez's photo with Kanye West. Actually, it wasn't even just the selfie that made it so headline-worthy — it was also the gymnast's super on-point caption, which is really just #SelfieWithKanyeGoals. I'm still laughing about it, in fact.

The 16-year-old gymnast and two-time Olympic medalist posed with the rapper with her trademark mega-watt smile, which was in sharp contrast to Yeezy's own humorless expression (classic Kanye, am I right?) And playing off of that "Find someone who loves you as much as Kanye loves Kanye" meme, Hernandez tweeted the photo with the caption: "I love Kanye more than Kanye loves Kanye." Can someone get this girl another gold medal for Best VMAs Tweet of the Night? It can sit right next to her Team All-Around gold and Beam silver.

Truth be told, this moment encapsulates everything that the general public loves about the VMAs: It may just be one selfie and one (hilarious) caption, but there are seriously so many pop culture references to dissect. It's the intersection of one of the most iconic rappers and one of the greatest gymnasts in the world (two straight-up American heroes TBH). It's relatable AF, what with the infectious excitement of a teen meeting a rather jaded music industry vet and all. And it's certainly the caption of a lifetime, one that incorporates a meme but also perfectly explains what is happening in the photo. Because without a doubt, at least for that moment in time, it certainly does look like Hernandez loves Kanye West more than he loves himself.

And truth be told, that's an Olympic feat within itself. Gold medals all around.