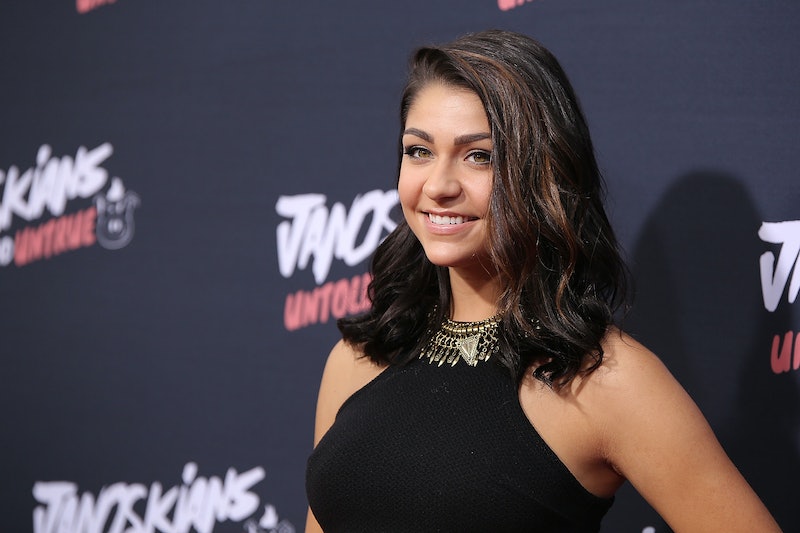 Catfish has brought several celebrities into its fifth season, from the guy who believed he was in a relationship with Katy Perry to the appearance of former Playboy model Jayme Nelson in the season premiere. The latest is YouTube star Andrea Russett, who, according to a sneak peek for the episode, was actually contacted by Catfish producers after she posted a video about a creepy experience that suggested she could use some help from Nev and Max. You see, instead of the typical online relationship gone wrong, on her episode of Catfish, Andrea Russett is dealing with fake profiles of her family members, which she believes were all created by one particularly ambitious and unkind Catfish.

The YouTuber, who makes videos about makeup, music, and comedy about her normal life, had been dealing with different forms of online harassment for years, including many people who pretended to be her with fake profiles. But when someone started to bring her family into things, she felt like it was time to figure out with what to do, and finally put a stop to the people out there who are pretending to be the real Andrea Russett. But the trouble doesn't stop there — there's also Alex Gresham, who is in what seems like a typical Catfish situation. He was in contact with someone who was pretending to be Andrea online by using fake pictures.

According to a trailer and pictures on the Catfish Twitter account, they'll be meeting the real Alex, and it doesn't seem like he's the one behind the impersonation of Andrea's family, suggesting that there are layers of deception here. Not only was Alex tricked into falling in love with someone pretending to be Andrea, but it's possible that his Catfish is also the one imitating Andrea's family.

If that's the case, I don't think this Catfish will be able to hide behind the usual, "I wasn't sure you'd love the real me" explanation. It's also possible that there are actually multiple people involved, one who's looking for romance and another who's looking to harass Andrea by impersonating her family.

Being a celebrity can make you a bigger target for being stalked or harassed online and it seems like whoever conned Alex and whoever is behind this interconnected network of fake profiles was really hoping to get closer to Andrea, so they could be a fan. But if you listen to the clip of Andrea's original video that caught the eye of the Catfish team, it's easy to understand why this gambit by a possibly ambitious fan turned out to be a tone-deaf move.

While Andrea understands that her level of fame means that she might be the target of negative comments, which are already unacceptable, this really crosses the line. Celebrities and YouTubers may make some aspects of their personal life accessible, but as Nev and Max will no doubt discover, it's not OK to do the same for their non-famous relatives. Plus, if there are all of these fake Andreas around, people like Alex are going to get caught in the crossfire. Catfish may have uncovered a chance to remove a lot of toxicity from the Internet at once in this Andrea, Alex, and Anonymous triangle.

More like this
The 'Big Brother 24' Racism & Bullying Controversy, Explained
By Jake Viswanath
Kanye West Has The Most Kanye Reaction To Kim Kardashian & Pete Davidson's Split
By Jake Viswanath
In Rap Sh!t, Social Media Has Main Character Energy
By Aramide Tinubu
Nicola Coughlan Just Revived 'Derry Girls' In The Most Unexpected Way
By El Hunt
Get Even More From Bustle — Sign Up For The Newsletter