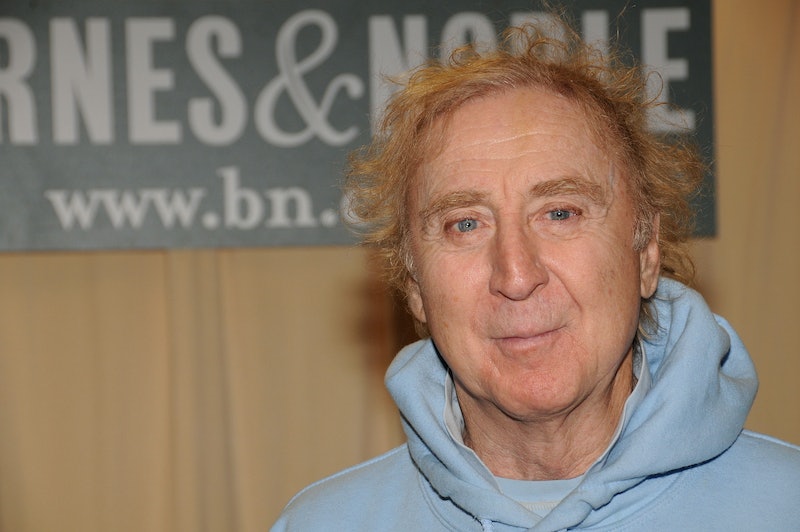 Hollywood lost an icon today. Legendary screen actor and recurring Mel Brooks collaborator Gene Wilder has died at the age of 83. He died on Monday at his home in Stamford, Connecticut. While details are still hazy, according to Variety, nephew Jordan Walker-Pearlman said Wilder passed away due to complications from Alzheimer's disease. And although it's heart-wrenching to hear Wilder's memories were fading, there's no denying that he left behind an unforgettable acting resume.

You can do a deep dive into a number of animated, hilarious roles by checking into any of his works with Brooks. 1968 saw his turn as neurotic accountant Leo Bloom in The Producers and the laughs kept coming when he took the reins in Blazing Saddles. Perhaps the actor's finest Brooks moment comes from the OG horror film parody (eat it, Scary Movie), Young Frankenstein (pronounced Fronk-en-steen). Between a screenplay that boasted both their comedic prowess and an unforgettable performance of "Putting On The Ritz," Wilder brought magic to flick behind and in front of the camera. In 2003 the film was entered into United States National Preservation Board for being deemed "culturally, historically or aesthetically significant," further solidifying Wilder's talents.

Perhaps his most legendary turn, though, was when he donned a purple coat and a whole lot of sass to play Willy Wonka in Willy Wonka and the Chocolate Factory. Wilder threw his own twist to the Roald Dahl character by being simultaneously delightful, whimsical, creepy and even poetic. He even went that extra mile into characterization by adding a little detail into his introductory scene: a stilted walk followed by a somersault. His reasoning, he told director Mel Stuart, was "from that time on, no one will know if I’m lying or telling the truth."

Of course, it hasn't all been rosy for Wilder, as he had a considerable history of struggling with diseases even before his diagnosis, both directly and second-hand. Back in 1989 he lost his then-wife, comedian and Saturday Night Live alumna Gilda Radner to ovarian cancer, the same disease that claimed his mother 32 years earlier. He was able to bring good into the world from those tragedies, however. From there he put his heart into fighting against cancer by co-founding several philanthropic institutions in Gilda's memory, such as the Gilda Radner Ovarian Cancer Detection Center and cancer support group Gilda's Club. Wilder himself struggled with a bout of nonHogkins lymphoma in 1999, but was reported to be in remission in 2005.

Wilder fell a bit off the grid in the midst of all this chaos, and following the '80s he mainly popped up very sporadically on television. Focusing mainly on writing, painting, and his charity work, Wilder rebuked the idea of acting. In a 2013 Time Out interview he shared why he had retreated from Hollywood in such a way:

"I’m tired of watching the bombing, shooting, killing, swearing and 3-D. I get 52 movies a year sent to me, and maybe there are three good [ones]. That’s why I went into writing. It’s not that I wouldn’t act again. I’d say, 'Give me the script. If it’s something wonderful, I’ll do it.' But I don’t get anything like that."

Tragically, we were denied one final reprisal of his comedic talents. It's clear, though, that however vague the circumstances Wilder's death are, we have all the physical evidence that his life was well spent. We tip a grand beige top hat to his legacy as a man who could always make us laugh.