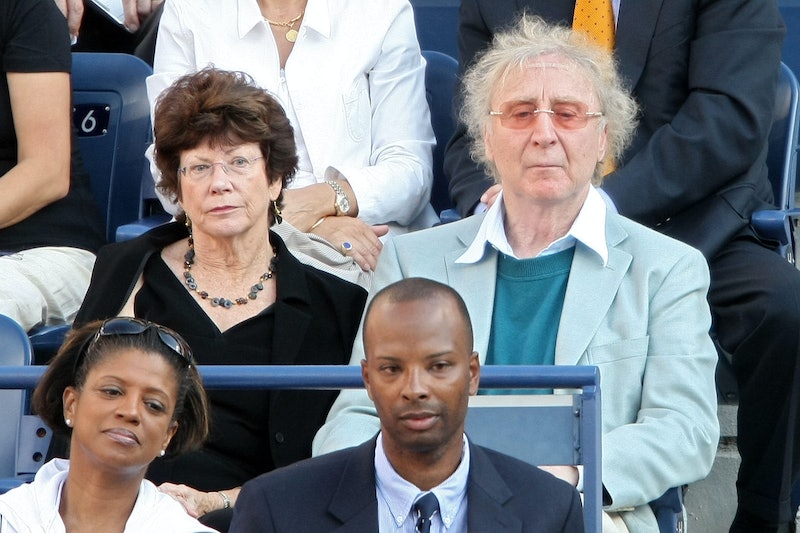 Here's some sad news about a beloved Hollywood icon: On Monday, actor Gene Wilder died at age 83 at his home in Stamford, Conn., reports Variety. Wilder's nephew Jordan Walker-Pearlman told the trade that Wilder died of complications from Alzheimer’s disease, an illness that the family had kept out of the press. Of his late uncle's later years, Walker-Pearlman told Variety: "He continued to enjoy art, music, and kissing with his leading lady of the last twenty-five years, Karen. He danced down a church aisle at a wedding as parent of the groom and ring bearer, held countless afternoon movie western marathons and delighted in the the company of beloved ones.” It's wonderful that Wilder was able to enjoy his final years and have such joyous moments, which including enjoying the time spent with Wilder's wife of 25 years, Karen Boyer.

Wilder's wife and "leading lady" Boyer may be known today as Wilder's spouse, but she has held her own place in entertainment alongside her husband. According to Boyer' IMDb page, she has worked in the costume and wardrobe department on a number of productions, beginning in 2011. According to the official page for short film Night And A Switch Blade , which Boyer worked on in 2013, Boyer crafts "unique, hand-crafted garments for stage and screen," alongside her production and costume design partner Bevan Dunbar.

Boyer wasn't always a costume designer, though she was tied to the entertainment industry for many years due to her connection with Wilder. Boyer was working for the New York League for the Hard of Hearing when Wilder reached out to her in order to research a role he was playing in the film Hear No Evil, See No Evil, according to Wilder's interview with The Telegraph. Shortly after his third wife Gilda Radner died of ovarian cancer, Wilder got in touch again with Boyer, who had asked him to help out with a research grant for a video cassette to help people who are losing their hearing. After they met five times, Wilder told The Telegraph that he asked her out to dinner for a proper date. Wilder credited Boyer with revitalizing his life after the death of Radner.

It sounds like Wilder and Boyer had a very special relationship, and it's wonderful that she was able to provide him with happiness in his last two decades of life — as he did with her.