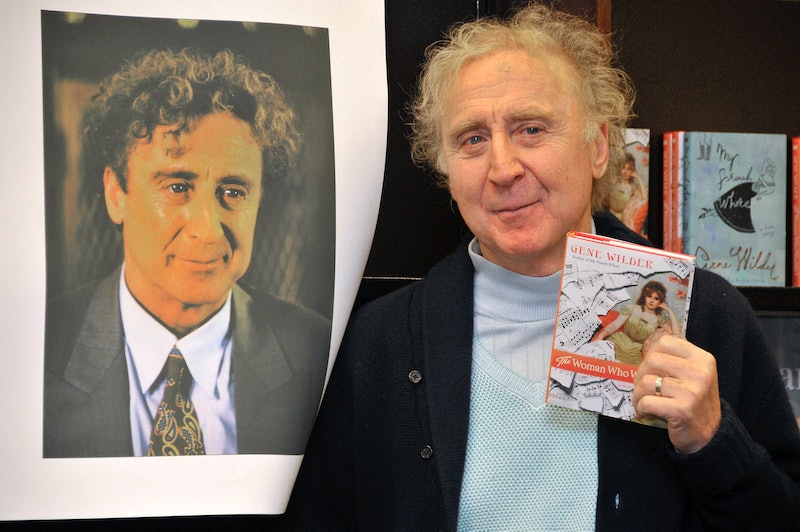 It feels like 2016 has been a relentless year when it comes to deaths of beloved celebrities. We've lost music legends David Bowie and Prince, acting legend Alan Rickman, literary legend Harper Lee, and now, unfortunately, comedic legend Gene Wilder has died from "complications from Alzheimer’s disease," his nephew Jordan Walker-Pearlman confirmed in a statement to Variety. Wilder was known for his frequent collaborations with Mel Brooks in films like Young Frankenstein and The Producers and of course, his titular role in the film Willy Wonka and the Chocolate Factory, a children's classic. In light of his passing, fans likely want to know if Wilder had any children of his own, however, the answer to that is complicated.

In an interview with Larry King, Wilder was asked if he had any children, as seen in CNN's transcript of the interview. His response was, "I had a daughter and lost her a long while ago. That's too sad a story to go into ... [She was] Twenty-two or three." Wilder seemed to be referring to Katharine Wilder, the daughter of his second wife, Mary Joan Schultz, who he adopted during their marriage. According to a 2005 interview with the New York Daily News, Wilder and Katharine "severed ties" after he and Schultz divorced. Wilder told the newspaper that Katharine is part of the reason why he wrote his book Kiss Me Like A Stranger and said, "To write about things I did lovingly, for her. Do I think she'll read it? No. But if she does, I hope it will explain some things she didn't want to understand."

In 1984, Wilder married Gilda Radner, his third wife, and according to People, the couple tried to have children but could not conceive. The magazine's obituary of Radner states that after going through fertility treatments, she suffered two miscarriages before being diagnosed with advanced cancer. Radner died of ovarian cancer in 1999 at the age of 42.

Wilder's life was filled with loss, but the amount of joy he brought into the world cannot be understated. He may not be survived by any children, but he is certainly survived by anyone who grew up watching his legendary performances and still look to him whenever they are in need of a laugh.