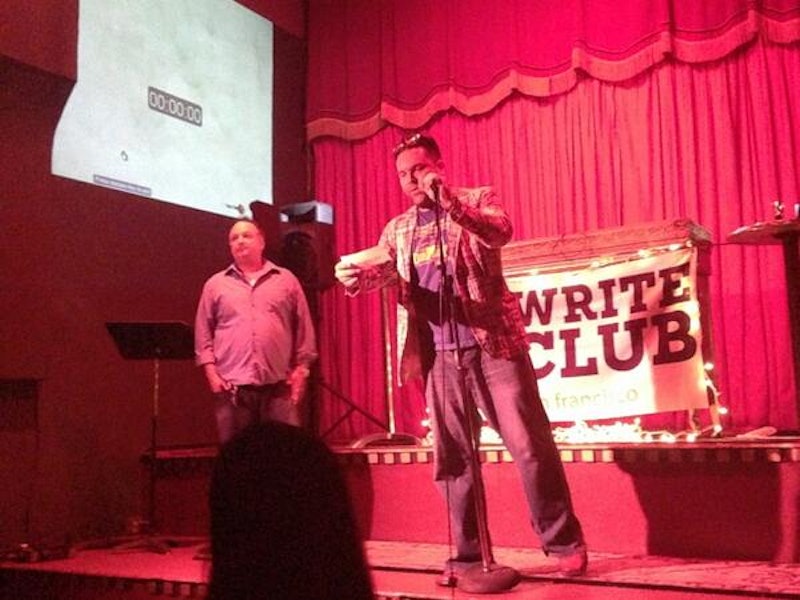 But while some clutch their pearls and bemoan the death of a engaged, intelligent public, others batten down the hatches of the disengaged and force them to re-confront the world of letters and performance and intelligent thought. Ian Belknap, the founder of the reading series Write Club, is the latter. Discouraged by years of working in the nonprofit arts world, he decided to create a show where the underlying thesis was as fantastical as the existence of Middle-Earth: What if artists wielded power?

Belknap isn't the only one treating the arts with the sort of punchy irreverence that's vital for captivating younger audiences and fully engaged “patrons” (no season tickets here, sorry). A worldwide live lit show called Literary Death Match hypes up its readings as though they were gladiatorial matches, while international series Naked Girls Reading uses the oldest trick of them all — sex appeal — to keep all eyes on them. And who could forget Reading Under the Influence, wherein authors take shots onstage? Blood, sex, death-by-drinking: these are the subjects that interest the masses. So why not pair them with a little literature, and see if people show up?

We asked Belknap to explain the appeal of a show named after a pop culture favorite, what he thinks of the state of arts today, and whether or not anything can be done about the whole debacle.

BUSTLE: What led you to start Write Club?

IAN BELKNAP: I had been a fundraiser in nonprofit arts world prior, and this was 2009, and you'll recall that the economy was as bad as it's been for several years. I got really tired of the pummeling vortex of discouraging news. Also, I had been to way too many reading series where I felt that, as an audience member, people were not respecting my time. If you have an approximate guideline of 10 minutes and you're still going at 17, okay, we got it, PLEASE get onto the next thing.

The name of the show I obviously took from the book/movie, which is just a handy mnemonic. I didn't want to get into the whole pseudo-philosophical underpinnings of Fight Club, I just wanted it to be a thing that people would recognize. Because of the structure of the show [two readers prepare a performance on competing topics, read for 7 minutes each, winner donates profits to charity of his/her choice], everybody understands the principles and approach right away.

One of the nice aspects of name-checking pop culture is it's a gateway drug. You can hook somebody on a cool thing that they would not necessarily have known they would like otherwise.

Sports get so much right as compared to the arts. Everybody in the stadium is fully invested in the outcome of the game, while people attending a play are like, “Eh, when's dinner?”

Competition is really critical to me, because I've noticed for decades now that sports get so much right as compared to the arts. Everybody in the stadium is fully invested in the outcome of the game, while people attending a play are like, “Eh, when's dinner?” That elemental bloodlust has everybody leaning into the proceedings in a way that they don't in a regular reading. I wanted Write Club to be for some purpose: think about what cause you believe in. It reorients the performer a little bit from, “Oh my gosh, I hope they like me,” to “What matters to me, what am I fighting for?”

Oh, for sure, for sure. The American theater has been wringing its hands for 50 years about the graying of the audience and how do we get the young people to attend, etc., without ever asking the existential question: DO WE SUCK?

The passive receptor model of being an audience member—I hate that. Why would you leave the comfort of your home, why would you put on pants to go out into the world, when you can get that same experience in an unlimited free way on the internet? If I'm going to create a live show, I want it to be fully live. I want everybody yelling their heads off, I want friction. So that there's a reason for us all to leave our homes and consume an arts experience in real time, in shared space.

If we could all, as artists, be on constant vigil against all forms of indulgence and excess, then we'd all be happier because more people could discover and dig what we're trying to do.

What do you think about what some might call the “literary establishment?”

Extrapolating outward from my experience in theater, I think another real existential threat that the arts face in this country is the Ivory Tower problem. If you have to have certain forms of education or if there are significant economic barriers to consuming art — if a hardcover book costs $30, and if a theater ticket costs $75 — you're just lopping off a huge quadrant of the population that, for practical reasons, is not going to engage with your work.

If there's this self-fulfilling cycle of, “We are so much smarter than the average bear,” then you're going to turn people off. I say cast a wide net — and there will be people who don't enjoy what you do, but don't make it preemptive. Don't frame art in a way that turns people off.

If we could all, as artists, be on constant vigil against all forms of indulgence and excess, then we'd all be happier because more people could discover and dig what we're trying to do.