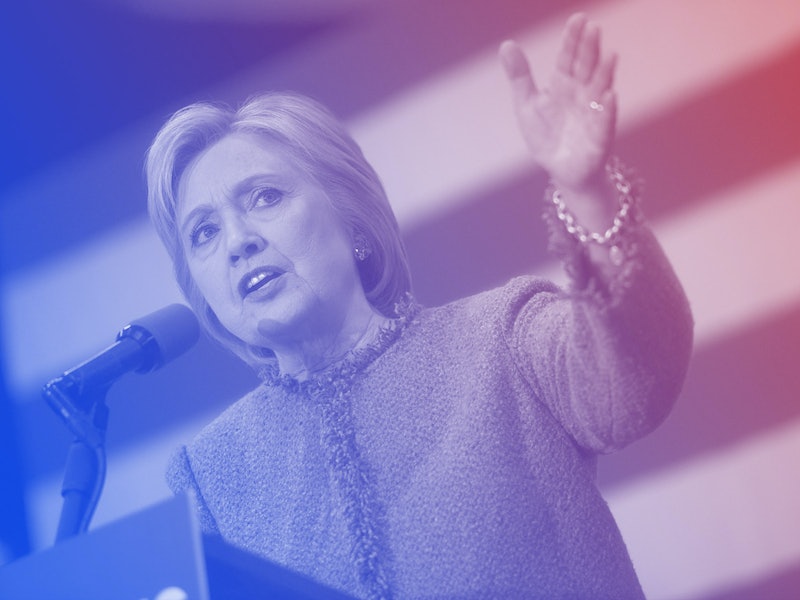 Speaking in Nevada last week, Hillary Clinton came out with an unapologetically fiery speech against Trump's new campaign chief, Steve Bannon. The former editor-in-chief of Breitbart, Bannon oversaw the publication best known colloquially as the voice of the "Alt-Right"— an offshoot of the Republican party frequently associated with Gamergate and white supremacist politics. To quote Clinton: "This is not conservatism as we have known it. This is not Republicanism as we have know it. These are race-baiting ideas, anti-Muslim and anti-immigrant ideas, anti-woman –– all key tenets making up an emerging racist ideology known as the 'Alt-Right.'"

For many Americans, Clinton's speech was their first introduction to the Alt-Right. Like a horror movie monster, I've found the Alt-Right to be a mutation of the conservative movement that's turned on its creator and taken control. This isn't your father's conservative party. I should know — as a prominent feminist in the game industry, I've spent much of the last two years getting threats from them so severe that the FBI was involved.

The Alt-Right rarely mentions deregulation, and they don't talk much about lowering taxes. Rather, it's a conservative activism on the Internet that goes to extremes to oppose diversity. The Alt-Right is more comfortable on Reddit and 4chan than in church. They communicate in memes, and see white supremacy and rape jokes as ironic. The more off-limit a joke, the better. Their political views aren't doctrinaire conservative.

Many are against globalization, and most feel the American system isn't working for them anymore. They have intense anger at the press, feeling misrepresented and misunderstood.

For the public, the most recognizable shock troops of the Alt-Right has come in the form of Gamergate, the hate group still targeting women that advocate for inclusion in the tech industry. Throughout 2014 and 2015, Gamergate became infamous for sending women death threats, rape threats, and extreme intimidation. I was one of these women, being driven from my home after receiving death threats that stated, "Your dead, mutilated corpse would be on the front page of Jezebel." These threats were so severe, they used them in a Law and Order episode based on Gamergate.

Though the public moved on from the story, the targeted harassment continues to this day. The playbook of the Alt-Right uses the same tactics levied against Hillary Clinton for the past 30 years. The idea is to throw enough accusations at a target until they're mired in controversy and their reputation suffers. It's the "politics of personal destruction," weaponized against people that aren't public figures.

Hundreds of press outlets throughout the world investigated Gamergate, including The New York Times, The Guardian, and The Washington Post, as well as Bustle — and found little merit to their claims to be about "ethics in game journalism." Yet, one outlet stood by them: Breitbart, under the leadership of Trump's campaign manager Steve Bannon. For Gamergate, Breitbart gave this hate group a legitimacy that no other mainstream outlet was willing to extend.

In her Nevada speech about the Alt-Right, Clinton read several shocking Breitbart headlines, including "Birth Control makes Women Unattractive and Crazy." Half of them came from Gamergate star Milo Yiannopoulos under Bannon's leadership. But the Alt-Right isn't just about targeting women — it also has deep roots in white supremacy and antisemitism.

At Breitbart, readers can expect a steady diet of the toxic ideas of the Alt-Right. One headline under Bannon called Bill Kristol a "Renegade Jew" (I'm not comfortable linking out to Breitbart in this or in following examples). Another virulently anti-Islamic piece under Bannon declared that "Muslim rape culture is not a 'dirty little secret' — it is widely recognized as integral to Islam as taught in the Koran and the Hadith."

Recently, Breitbart implored readers to watch an "Identitarian" video, a subset of the Alt-Right that advocates for ethnically and culturally homogeneous geographical regions. Critiquing Germany's immigration policies, the video says, "You preach of the diversity of cultures yet you destroy them." In another part of the video, the white narrator warns, "You create yourselves a new people and turn us into foreigners."

And yet, for many on the Alt-Right, these extremist political ideas are taken with a wink and a nod. The more extreme the racism or sexism, the more it seems like a joke to the denizens drawn to Reddit and 4chan.

Take this cartoon of feminist Anita Sarkeesian, a frequent target of the Alt-Right and Breitbart. The comic is a familiar sight to anyone that's spent time around members of Gamergate; it's frequently tweeted at feminists and has been the subject of endless memes on 4chan. The roots of this cartoon are from particularly virulent neo-Nazi propaganda, redrawn to target a prominent feminist. While most people would find this distasteful, it's a perfect punchline to the Alt-Right, who genuinely see society as post-racial.

According to Clinton, the hiring of Bannon as Trump's campaign manager is just more evidence that he's "temperamentally unfit to be president." In last Thursday's speech, she said it proved "[Trump's] embrace of ideas on the extremist fringe."

The de facto merger between Breitbart and the Trump Campaign represents a landmark achievement for the "Alt-Right." A fringe element has effectively taken over the Republican Party.

For feminist activist Ella Dawson, hearing Clinton specifically call out the Alt-Right was powerful. Like many women in the tech industry, Dawson has been targeted by the Alt-Right, and wrote about it in a powerful Medium post.

I expected a backlash when I began writing a blog about what it's like to live with genital herpes. Speaking from personal experience about a taboo topic like sexually transmitted infections was never going to be easy, and I prepared myself to face judgment from strangers online. What I could not have anticipated in my wildest nightmare was becoming a favorite target of the Alt-Right.

Like the women harassed by Gamergate, Dawson found herself barraged by an endless assault of harassment, privacy invasion and abuse. She was also targeted by Yiannopoulos, and was the subject of inaccurate ridicule in a Breitbart article. Dawson writes about having what she calls "a nervous breakdown in slow motion. I was exhausted, angry, terrified and cynical. Few people could empathize with how the daily assault of abusive tweets, emails and comments had worn on my nerves like sandpaper."

Dawson says hearing Clinton take on the Alt-Right in Reno was powerful. "I have never seen a politician understand the danger of the Alt-Right. ... [It] also filled me with genuine, raw hope for the first time since I became an activist," she wrote. She's not alone. I've had conversations with dozens of women in tech eager to see the unique dangers of the Alt-Right talked about on the national stage.

Undoubtedly, the Alt-Right will continue to be a force in American politics well beyond the 2016 election. For some, it's evidence of the fragmentation of the Republican party — the slow divorce of their corporate wing and their social conservatism wing. For women like Dawson in the crosshairs of this bizarre movement, let's hope a more grounded version of the party ends up on top.