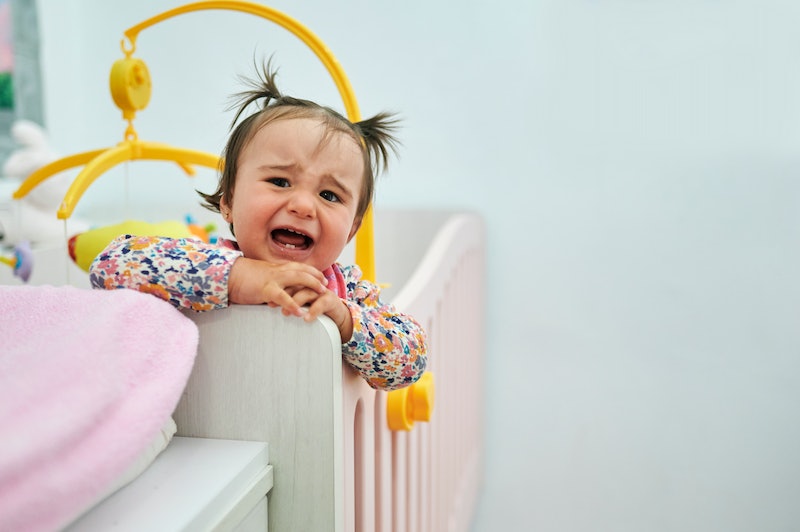 It's assumed, as a human universal, that babies are cute. Their fat cheeks, their ridiculous stomachs, their tendency to make giant toothless grins at nothing... it all adds up to a feeling of warm fuzzies in the stomach around the world. Or does it? In defiance of societal taboo, it's more and more common for people (young women in particular) to reveal that they do not, in fact, particularly like babies, and to question whether that means there's something wrong with them. The good news: It doesn't. The more complex answer: Not finding babies cute means that several evolutionary impulses are at play, some of which are more powerful than others.

I am on record as a lover of babies. I have a plethora of younger cousins, many much younger than myself, and grew up watching a seemingly endless wave of fat tiny people keeling over in bonnets at family gatherings. But this actually fits into a broader sense of attraction to fat things with big eyes. Round cats, enormous Newfoundlands, koalas — I'm all in. And that, as we'll discover, is not a reflection of my own empathy, but a deeply-embedded evolutionary strategy by which humanity has ensured its own survival. Cuteness isn't just about Instagram; it's got the perpetuation of the species at its heart. But there are many, equally powerful factors that can interfere with our perceptions of a baby's cuteness, and they do not make anybody abnormal or heartless.

Let's get into why you might not like babies, and what that has to do with your psychology.

It turns out that the distinct sensation of "Adorable!" that many of us get when we see a fat young baby has its own psychological term, and it's got a slightly unfortunate history. "The Kinderschema," discovered and outlined by Austrian scientist Konrad Lorenz in 1943, are a set of characteristics in human children (and in other animals) that prompt that particular "awwww" response in adults. These special characteristics were "(a) large head relative to body size, rounded head; (b) large, protruding forehead; (c) large eyes relative to face, eyes below midline of head; (d) rounded, protruding cheeks; (e) rounded body shape; and (f) soft, elastic body surfaces." Lorenz, unfortunately, isn't an uncomplicated figure. Though he went on to repudiate his past completely and win the 1973 Nobel Prize for his studies of geese, he took part in a Nazi study of racial fitness in World War II, wherein participants deemed "unfit" were sent to concentration camps. Not so cute.

Suffice it to say, the Kinderschema is theoretically an evolutionary tool. If we are automatically drawn to something, to coo and aw over it, we're also likely to take care of its needs, to make sure it's well-fed and survives to adulthood. In other words, the Kinderschema is an evolutionary reflex to make sure we don't abandon our kids to grow up wild on some hillside or get eaten by wolves. A 2009 piece of research found that the presence of Kinderschema in baby faces did actually affect "motivation for caretaking" in adults. But if you've spent any time with people clucking over small fat infants, you'll know this is basically old news.

Even if you don't feel particularly fond of babies (for reasons we'll discuss shortly), the Kinderschema may also affect how you interact with other small, fat things — cats, for instance, or baby pandas. Our understanding of "cute" in many animals is based on the idea of the Kinderschema, and may explain the characteristics of dogs like pugs, who've been progressively bred to look more "adorable," with big eyes and a round head.

Why Disgust May Override The Love Of Babies For Some

Research into personal essays from people (women, in particular) who don't profess a fondness for babies reveals that they tend to focus on one particular thing: Babies are disgusting. One essay on Thought Catalog calls them "disgusting and inconsiderate," and they're not kidding. And that's likely what the Kinderschema was evolved to combat. Babies are deeply disgusting, with bodily fluids exploding everywhere and a complete lack of manners. They're also absolutely helpless and cannot clean up after themselves. Without an overpowering urge to look after them, adults would likely avoid them entirely.

But disgust, for some of us, seems to be more powerful than the Kinderschema. That isn't actually surprising, particularly when it comes to infants who aren't our own. Disgust is an incredibly powerful emotion. As Salon pointed out in its discussion of the science of disgust back in 2011, it likely has an evolutionary basis, too. We probably evolved disgust to keep us away from things that could possibly poison us, and to prevent us from ingesting anything potentially harmful (rotten meat, slimy moss, that sort of thing). And, as New Scientist has pointed out, disgust has a high social role, helping us stay away from other humans (including babies) who may spread disease to us. Disgust can override our self-interest in a lot of areas (New Scientist also cites research that shows people who are shown disgusting images are likely to sell things for lower prices than the un-disgusted), so it's not unreasonable to see how it could override the Kinderschema and make us view babies not as adorable little humans, but as horrible, threatening disease factories.

(This is also why we might be able to look at dogs, cats, and other animals with the "adorable" response, even if we find babies disgusting. Even when they're just born, animals are often far more capable than humans, and can be trained rapidly to, for instance, defecate in an acceptable area within weeks of birth. That capability might be the difference between disgust and a cuddle.)

Babies Can't Easily Be Separated From The Concept Of Motherhood

If you're a woman without a child and you don't like babies, there's also another powerful social reason that may mediate your Kinderschema: the pressure for you to have a child of your own, and the corresponding worries about time, work, and self-fulfillment. Babies and motherhood are not a separate thing for any women contemplating them. Louisa Peacock, writing in The Telegraph about not wanting to hold the babies of other women, explains that "there is some weird psychological barrier in my head that says: BABIES WILL BE THE DEATH OF YOUR CAREER."

The reality is that while babies may be all well and good, they are a product of a condition that, for many young women, induces feelings of ambivalence or dread. The reality is that life as a mother may not be the fulfillment of everybody's wildest dreams. As The Atlantic reported, in a 2012 feature comfortingly titled "Not Wanting Kids Is Entirely Normal," posts on motherhood forums about tedium, anxiety, an inability to feel like oneself, drudgery, and other negative psychological impacts of motherhood are extremely common. Motherhood for women invested in careers is a risky bet. As The Guardian points out, women going back to work after maternity leave can find that situations have changed in their absence, and are statistically more likely to be let go than male colleagues with worse performances. In these circumstances, where societal expectation and a sometimes-problematic reality meet, it's pretty understandable that the Kinderschema would be suppressed under a wave of resistance and anxiety.

This is, of course, not the universal case. Women and men can enjoy holding babies and spending time with them without actually wanting any of their own. They can contemplate the Kinderschema and also be wary of snot cascades and their own reproductive choices at the same time.

Can Baby Disgust Be Cured?

We don't know much about how to "cure" baby disgust. Most of the studies on disgust are based on changing our attitudes toward things that are seen as societally unacceptable, like eating insects. Babies are possibly the most socially acceptable things around. The interesting thing about disgust, though, is that yet another evolutionary impulse may override it when it comes to our own children. It's been discovered that the experience of parenthood "rewires" the brains of both mothers and fathers, prompting a variety of hormonal and neural responses that produce caring behavior. In other words, your disgust may be overridden by the substantial neural rewiring of having your own child. You may hate other babies, but your own baby's vomit and poop might not bother you so much. There's not any research on the extent to which this happens in people who say they hate babies, though, so don't count on it.

There's also a lot we don't know about the psychology of disliking babies, largely because it's a gigantic societal taboo, particularly for women. We do know that abuse as a child, for instance, can create serious bonding problems for women when they have their own kids, but there's no research linking child abuse to a general dislike of kids. Researchers haven't yet devoted a lot of time to the phenomenon of baby dislike. But rest assured, you're not "unnatural" if you look at babies and see nothing except a time-draining poo machine. You're just a realist, perhaps with a particularly sensitive gag reflex.

More like this
Wimbledon Alters All-White Kit Rule Amid Candid Period Discussions
By Catharina Cheung and Rachel Mantock
Bumble's "Compliments" Feature Lets You Message Before You Match
By Lexi Inks
15 Ways To Deal With A Toxic Family During The Holidays
By Gabrielle Moss and Carolyn Steber
Are Capricorn & Aquarius Compatible In A Relationship? Astrologers Weigh In
By Kristine Fellizar
Get Even More From Bustle — Sign Up For The Newsletter