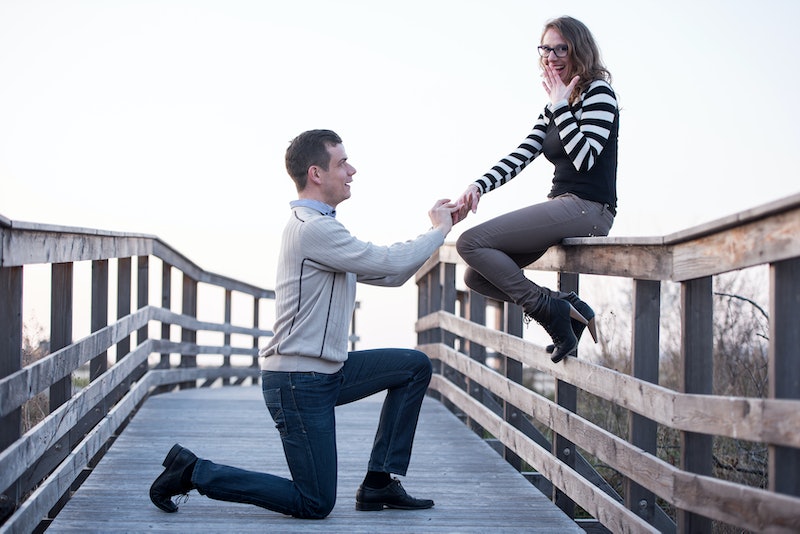 If you stop to think about modern marriage proposals in the Western world for more than two seconds, you can come to the conclusion that they're pretty bizarre. Why do guys kneel to propose? Why the ring? And why don't women propose too? What is going on? It turns out that much of the history of marriage proposals (or intentions for betrothal) involves old traditions, modern ideas, influences from throughout European history, and a judicious use of guesswork.

What we view as "tradition" might well have been cooked up by advertisers in the 1930s, and what might seem cool and modern might in fact date back centuries. And some marriage proposal traditions, frankly, seem to have emerged as the fashion at some point and stuck around indefinitely, for reasons nobody can quite pinpoint. Tracing the history of any human behavior, even if it's incredibly common, is trickier than you might think.

Instagram seems to have ushered us into an era of competitive, photo-friendly proposals. Skydiving! On the rocks of the Galapagos! Flashmob-zombie-Broadway magnificence! At the root, though, there tend to be several key elements: the giving of a ring, usually with a diamond, usually by a male partner, mostly on bended knee (rising when the other person accepts). Some of those elements are medieval or older, and others popped up in the Regency era, but there's little about the modern marriage proposal that is, in fact, really "modern". Unless you do it via Tumblr or using a drone, that is.

The idea of kneeling on one knee as essential to the standard proposal is not enshrined in history; it appears to be a largely modern invention, but it's not clear how it originated. The engagements we know most about in history are the ones between nobles and the wealthy, and those were often in the manner of business arrangements, with none of this "kneeling before your beloved" stuff. In fact, paintings of noble betrothals in history invariably depict both parties as standing or seated; no kneeling shows up at all.

One possible origin of the modern kneeling ideal is in the Middle Ages tradition of courtly love, in which a man of good birth essentially devoted himself (complete with poems, odes, deeds of honor, and general vassalage) to a noblewoman he perceived as superior. The entire principle of this popular attitude was that the man was a kind of servant to the woman, whom he idealized beyond all reality; and he performed his servitude by kneeling, spiritually and figuratively. (Whether they ever actually got together is a matter of historical debate. Probably not, in a lot of cases; many of the women in question were married.) Kneeling represented feudal surrender and admiration. Historians have actually had arguments about whether certain medieval images show men kneeling to their courtly loves, or to their male masters.

But kneeling in general in European history has been a sign of supplication, humility, and servitude. A lot of Christian iconography of prayer, for instance, involves kneeling, expressing your service to and debasement before God; and it's also been pointed out that kneeling between men was a big sign of status. Knights kneeled before their lords to receive honors, and surrendering armies kneeled before their conquerors. Kneeling to the woman you're going to marry may be part of the same thing: a request for her favor and a physical demonstration of loyalty and surrender. It seems to have first shown up in the 19th century, but as to why, your guess is as good as mine.

The first reliable records of engagement rings for women, declaring that they would in the future be married to a specific man, dates to the Roman period, where betrothed women were given a gold ring to wear in public and an iron one to wear at home while doing household tasks.

But rings themselves as engagement symbols were likely around for many centuries, but they turn up in law at several points. The Visigothic Code, a set of Spanish laws from the 7th century, declared that betrothal rings, like pledges in business, could not be revoked once they were given; you had to get married. Pope Nicholas I in 860 attempted to make an expensive, gold engagement ring legally necessary, so that men would make a significant monetary sacrifice and take the marriage seriously. And the idea of a "betrothal" as a legal period of time (a gap between the intention to get married and actually performing the ceremony) was enshrined in Christian church law in 1215. Pope Innocent III declared that there had to be a waiting period between wanting to get married and being able to do it legally "so that if legitimate impediments exist, they may be made known". (Impediments, as we all know from Jane Eyre, usually consisted of there being previous wives and husbands still living.)

The first recorded engagement ring with diamonds dates back to 1477, but it didn't involve a solitaire; the ring in question was a gift from Archduke Maximilian of Austria to the noblewoman he was courting, 20-year-old Mary of Burgundy. The famous jewelers Harry Winston describe the ring as "a delicate band adorned with diamonds in the shape of her first initial". Mary of Burgundy was a hugely powerful woman, and had her choice of eminent suitors, so this first diamond "engagement" ring probably wasn't the thing that won her affection; it's likely she'd selected Maximilian for her hand and he gave her the ring to cement the arrangement. (Tragically, Mary died after a horse riding accident at the age of 25.)

After Mary of Burgundy, the real beginnings of the diamond engagement ring tradition only emerge in the late 1800s, when a mining company struck rich seams of diamonds in Africa and formed a jewelry department, De Beers, to deal with it. De Beers' master stroke came in the 1930s and '40s, when it employed a hugely successful "Diamonds Are Forever" advertising campaign to insist to the American population that diamonds were scarce, expensive, and the only viable way in which to propose marriage. De Beers consciously created the status of the diamond engagement ring, and it still goes down as one of the most successful advertising ideas of all time: diamond engagement rings are, in most Western countries, now seen as the only acceptable option when a man declares his intention to get married.

It may interest you to know that a similar attempt to make male engagement rings a necessity actually failed. The Atlantic has traced a vast advertising campaign in the 1920s that attempted to sell "man-gagement" rings to the masses, complete with "ultra-macho names: the Pilot, the Stag, the Master." Unfortunately, it never really caught on. The engagement ring has usually, in European history, been about the claiming of the woman, and men rejected the need to declare their own taken status so openly.

The current dynamics of proposals generally deem them to be one-way: the man proposes to the woman. (Unless, of course, it's a same-sex marriage, in which case all traditional gender ideas are wonderfully moot.) The idea is so entrenched that a 2012 study of students at a liberal college in America found that ZERO percent wanted relationships where the woman proposed to the man. It's one of the most bizarre elements in marital culture. But where does it come from?

A lot of it is down to practical considerations. A lot of aristocratic marriages in Europe throughout the ages were about negotiation rather than adoration, but that wasn't the case for the everyday person; normal courtship reaffirmed gender roles. Until very recently, men were often expected to provide for their future wives, and therefore proposal was often based on when they were financially ready, not when the bride was. Plus, courtship was one of the rare societal arenas in which women literally held "court," and men became their "courtiers". Even if they didn't have much final say in whether the courtship was successful (family approval was often necessary), it was a chance for women to feel powerful, which, in a historical context in which most women were under the explicit legal control of their husbands and fathers for the majority of their lives, was no small thing.

A centuries-old tradition restricts the right for European and American women to propose marriage themselves to one day: February 29, which only occurs every four years. The idea of the "leap year" proposal has several myths attached to it, from the story that it was invented by Scotland's Queen Margaret to the nice idea that St Brigid of Kildare argued for the whole concept in the 8th century, but there are also some pretty comprehensive objections to both theories. (For one, Queen Margaret would have been five at the time.) What we do know is that leap-year proposals were known, though rarely practiced, from around the 1780s onwards; and specific European traditions involve the rejection of such proposals, with Finnish men having to accompany a rejection with money for a skirt, and Danish men 12 pairs of gloves.

And the concept of women asking men is still extremely rare in America, as one expert told the New York Times: "Though women have more power to move the relationship closer to marriage, they still want the man to ask. That’s considered his job." Of course, you can choose to change that expectation anytime you'd like — and many of us do.