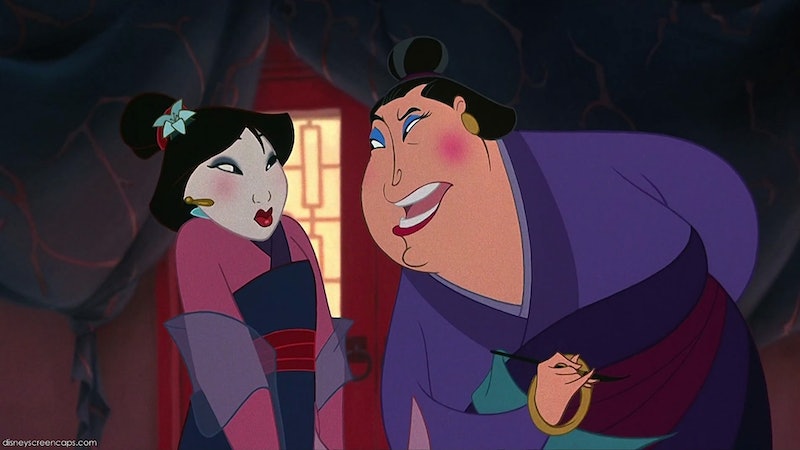 This August 31 is National Matchmaking Day. In the modern sense, matchmaking tends to refer to the apps and sites that we use to do the dirty work of sorting out suitors; but for much of human history, the matchmaker was a person. Choosing a life partner was often viewed as far too complicated a decision for young people on their own, and from Aztec civilization to ancient Greece and China, their elders (often women) intervened to make sure they had the "right" kind of suitor. So far, so traditional; but matchmaking throughout human history has had its irreverent moments. How about a ritual biannual orgy, holy sparrow's eggs, or tests involving kindness to camels?

The matchmaker as a figure appears often in popular culture; think of Fiddler On The Roof's "Matchmaker, Make Me A Match," or Mulan's disastrous encounter with a snooty matchmaker who declares she'll never bring her family honor (ironically enough, of course). It also remains a pertinent part of several societies; in Japan, for instance, the process of omiai involves two young people being matched by a matchmaker, or nakōdo, who sets up meetings and sends pictures and messages between prospective families. The stilted, often slightly bizarre photos of potential brides that result were satirised by Japanese modern artist Tomoko Sawada in her OMIAI series, in which she appears as thirty different "options" for Japanese lovelorn men.

If you are still looking for love, today's matchmakers often involve algorithms and left-swipes rather than in-person interviews (though that also still exists), but there might be a charm in going back to more traditional times. Except for the ones involving shooting guns in the air.

1. The First Biblical Matchmaker Prioritized Being Nice To Camels

The matchmaker, or shadchan, remains an important figure in some Orthodox Jewish communities, and has a pretty ancient lineage: the first example shows up in Genesis in the Bible, and is performed by a dude. The episode involves the servant of Abraham, Elizier, selecting a bride for Abraham's son by observing women by a well. His choice, Rebekah, passes something Biblical scholars call "the camel test;" she comes to fetch water from the well for her own family, but gives some to both Elizier and all his camels. Given that there were ten of them, this was some feat of generosity.

Ancient Greek matchmakers operated, essentially, as telegram-carriers or go-betweens. Always women, the promnestria, as they were called, did all the negotiations for two families wanting to marry; they made the approach, took messages, and, most importantly, reported their personal opinions of prospective spouses to hopeful brides and grooms. (It's likely that some pairs in this arrangement didn't meet each other at all until the wedding day.)

The problem with this was that, if the marriage ended up unhappy, it was all down to the promnestria's taste, and whether she exaggerated or traded in scurrilous libel. In one of Aristophanes' comedies, The Clouds, the character Strepsiades, whose wife has slightly too expensive tastes, loudly laments that he wishes the promnestria who set them up would die a horrible death for her liberties with the truth. Sounds like a risky job.

Many matchmaking traditions in history, as we'll see, tended to be tied to the seasons, and had relationships with fertility and the spring. This seems to have been particularly the case in ancient China; according to texts, the coming of the swallows every spring to raise their young symbolized to matchmakers that the "season" for setting up young people had begun, and that they could make the relevant sacrifices to the gods (an ox, a sheep and a pig). The swallow's eggs had ties to ideas of fertility and nobility; the possibly-mythical female figure Jiandi, who may have spawned the Shang dynasty that ruled China for hundreds of years (1600-1100 BC), allegedly gave birth to the first of the line after eating a swallow's egg that had dropped from heaven.

In some communities, the role of matchmakers went way beyond sitting families down over some tea and asking them what they wanted in a son-in-law. In Aztec law, the matchmaking service was provided by older women under the title cihuatlanque, who did everything. And I do mean everything. According to sources from the period 1500 to 1700, the cihuatlanque actually married the couples they successfully matched, using a ritual in which they tied the groom's shirt to the bride's dress. And after the celebrations, they euphemistically "put the couple to bed". Whether that means escorting them to the bridal chamber, or giving more explicit wedding-day instructions, is not made precisely clear.

6. Victorian Matchmaking Was Based Around Grouse Shooting

The Victorian period in England brought one of the most stratified and intense sets of matchmaking and courtship regulations in history. If there was one thing the Victorians were good at, it was keeping a tight watch on the behavior of young women of marriageable age. Young English girls of suitable age (generally 21), birth and education were able to "come out" as marriageable women in a gigantic debutante ceremony around Easter in Court, in which they wore white gowns (with compulsory nine-foot trains), elaborate feather headdresses, and carried bouquets. The "season" on making a match was declared open; but it was deemed closed at the “Glorious Twelfth” (12 August), which was the beginning of the shooting season for grouse.

If they didn't make a match between those dates, it was pretty hopeless; this being the Victorian era, women were only allowed extremely limited contact with the men who courted them, had to be escorted everywhere by chaperone, and could lose her reputation for everything from flirting to riding in a carriage of the wrong type with an unmarried gentleman. ("Open" carriages were acceptable, as the public could see in; "closed" ones with roofs and doors were not.)

In the age of Tinder and Bumble, you may believe that the 2000s were the real heyday of the modern approach to matchmaking, but you'd be dead wrong. The origins of attempts to find the "science" at the root of good matches is very old indeed, and a magnificent example shows up in the 1920s. The Smithsonian has a brilliant article from a 1924 journal called Science & Invention , which proclaims four "scientific tests" in order to ascertain whether a potential married couple will thrive or fail.

The first is a pulse test while kissing your partner, the second a measurement of your "excitement" while watching your partner suffer, the third a "smell test" of one another's body odors, and the fourth a "surprise". The fourth is, on the scale of things, very much the worst: it involves a gunshot being fired in the air, the "nervous reactions" of both startled parties being assessed, and a judgement given: if they startled too much, they're too nervous to be married. It's amazing, but shooting guns around prospective spouses isn't actually encouraged as a method of guaranteeing their fitness these days. (We hope, anyway.)