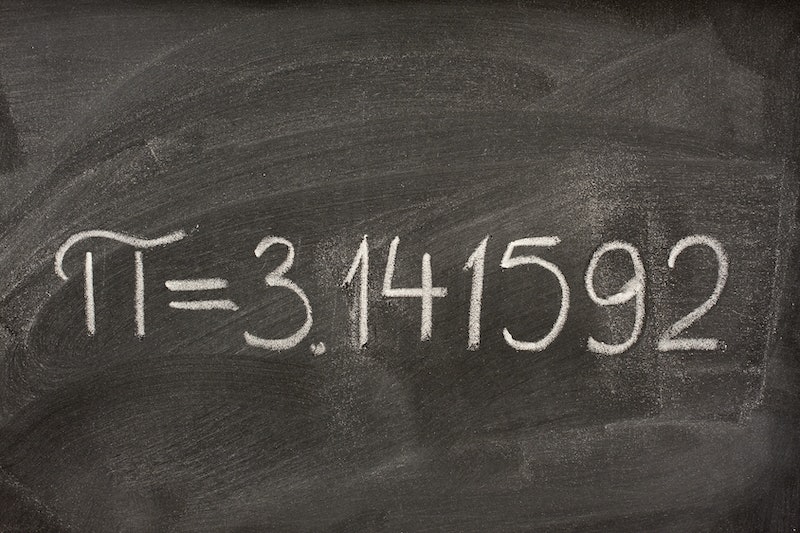 Not only is today Friday, it's also Pi Day, the yearly occasion we celebrate that elusive number we learned about in sixth grade — Pi, otherwise catchily known as 3.14, Well, 3.14159265 if you want to be ambitious, or that squiggly symbol, π. Fun fact: Albert Einstein was born on Pi Day. Some of our grade school teachers used March 14 as an excuse to bring in pumpkin pie (and then they tried to brainwash us into liking math).

But Pi Day isn't just for overenthusiastic math teachers. In 2009, our very own House of Representatives passed House Resolution 224, officially recognizing March 14 as Pi Day. But some institutions really go overboard when it comes to celebrating the big 3.14 every year. Here are three taking Pi Day very seriously...

San Francisco's ExplOratorium on Pier 15 has a whole day of events planned for March 14. Which isn't surprising, considering that the first-ever Pi Day celebrations took place in the ExplOratorium in 1988. In fact, one of Friday's events is even a "Pi Procession," which involves a "Pi Shrine."

Because of course you wondered, the Pi Procession involves attendees being assigned a digit between zero and nine, and then lining up to write out as many digits of Pi as possible. They then hold a parade, which ends at the Pi Shrine, which is embedded in the sidewalk. Fireworks, cheerleaders, and dancing are featured.

It's not just Princeton University that goes all out on Pi Day — the town of Princeton, New Jersey joins in, too. On Thursday night, Princeton kicked off "Pi Day weekend" with a reading by physicist Charles Adler from St. Mary's College of Maryland.

On Friday, they'll have a pizza pie-making contest. Yup, pizza pies. Plus, the town will be offering tours of Einstein's neighborhood and hold an Einstein-lookalike contest at the Princeton Public Library.

Oh, and Princeton University's math department will hold "pi recitations." Awards go to those who can recite the most digits of pie.

And here's footage of some of Princeton's Einstein lookalikes from last year...

Believe it or not, MIT might top those last two with its Pi Day celebrations. On Friday, it'll release admissions decisions — at 6:28 p.m.

Why that time? Well, 6:28 p.m. is Tau Time, a mathematical concept touted by Vi Hart, a well-known mathematician who makes videos about math and is "anti-Pi." She believes pi is a terrible concept, and compares Pi Day to Columbus Day: It's importance is overemphasized.

Tau is, in fact, is more important: It represents the ratio between a circle's circumference and its radius — in other words, 2 pi, or about 6.28. Hence 6.28 p.m. Geddit?

Basically, MIT has honorably decided to pay tribute to anti-pi warriors by releasing admissions decisions then.

There's more: MIT will be serving pies, of course, and its Graduate Student Council will hold a pi recitation contest.

With that said, we hope you're off to go and enjoy yourself a slice.