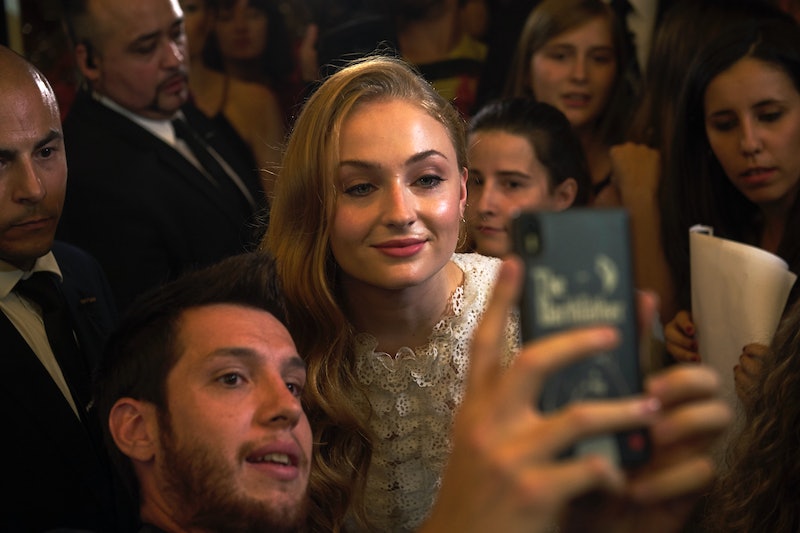 It's not easy being on Game Of Thrones. You have to keep so many secrets. To keep twists and turns of the HBO series under wraps, the Game of Thrones actors lie not only fans, but also to their friends and family. Just ask Kit Harington, who was in his own sort of hell during the "Is Jon Snow dead?" summer. However, he isn't the only one on Game Of Thrones who's had to keep a secret. Everyone in the cast and crew is forced to play along, giving vague answers to questions, or just out and out lying to keep fans off the scent. Remember HBO releasing that statement that Jon Snow was dead? Lies, all lies, I say.

But it certainly isn't easy keeping secrets from the fans of Game Of Thrones, who are looking for any clue that could reveal plot secrets. A haircut could give something away, and even a flight to Dublin could lead to Game of Thrones theories that risk ruining a surprise. You can't help but feel bad for these actors. Not only do they have to act onscreen, but they're also required to act off-screen. It's all in the name of their art, but it's worth taking a look back at the artful lies the Game Of Thrones cast have told to protect the secrets of the show. Just for fun.

Well, you already know how this turned out. Poor Harington, though; he was forced to lie over and over again. So many times that Vulture started keeping track of all the ways Harington tried to get around talking about Jon Snow. He had to answer why he hadn't cut his hair yet if he hates his Jon Snow look so much, and why he was still hanging out in Ireland, AKA Game Of Thrones headquarters. Harington even took a lie-detector test, which he failed. He finally got to the point in January 2016 where he just broke down and said, "People didn’t want me to die, but he’s dead. So there you go, everyone has to get used to it." Can you blame him? I was getting sick of hearing him talk about it too.

Harington ended up offering a lengthy apology for lying to fansin an issue of Entertainment Weekly. There he said,

At first I thought I would find it fun. This will be a fun game. But I had to lie to a lot of close friends and cast members and crew. The longer it went, the more I felt like I was betraying them. So I did end up letting people in, slowly.

2. Sophie Turner Lied, But Thought She Was Telling The Truth

It's hard to blame Turner for not telling the truth about whether Jon Snow was dead or not, since she didn't know she was lying. Harington admitted to Entertainment Weekly that Turner believed him when he said he wasn't coming back to the show and wrote him a "heartfelt goodbye letter" that he still has. "Bless her," Harington said of the letter, which had her talking about how much she loved working with him. "That made me chuckle.”

3. Iwan Rheon Lies For A Year About Ramsay's Fate

In an interview The Daily Mail, Rheon admitted lying about Ramsay's fate was hard on him. For nearly a year, he said, he had to deny that he was going to die in the Battle of the Bastards in Season 6 as a way of keeping anyone else from spoiling the news to the press. "It gets tough," Rheon said of lying to people. "And it doesn't help that I'm not a very good liar so people ask me questions and it's pretty obvious." He also said it was a relief to finally be able to talk about it: "I filmed it in December, it's been a while, yeah."

A very long while, yes, considering that he did this Daily Mail interview in June.

4. Emilia Clarke Only Kind Of Lied

When it came to the question of Jon Snow, Clarke played it smart and chose to only half-lie. Her response when asked about about the character? She simply told MTV News there's a "50/50 chance" he's gone. While it does appear that Clarke was 100 percent lying, you have to give up to her for the artful way in which she did it and how likable that answer is. No one was getting mad at Clarke for saying this.

While Rheon and Harrington hated not telling the truth to their cast mates, Maisie Williams admits she kind of liked lying to people about what was going on with Jon Snow. She even tweeted after it was revealed that Snow wasn't dead: "Trolled u." When the actress appeared on the British talk show Alan Carr: Chatty Man she said, "Whenever we were asked the question, ‘Is Jon Snow coming back?’ everyone was like, ‘Oh, I can’t say,’ and I thought that was boring and I thought we should just say ‘No.'" She continued, "I took it upon myself to lie to absolutely every journalist, every fan, and everyone that came up to me."

While it may have been mean — she admits some fans were upset and would rethink asking her for a photo — she says it was worth it because it was actually kind of fun. “Why would I say, ‘Who knows?’ when I can totally lie and catch everyone off guard?” She makes a good point there.

In an interview with Metro.us, the interviewer says the actor, who plays Ser Davos, gave "politely vague answers" to all of the Game of Thrones questions that could lead to spoilers. It helps that he was also showing off his "Irish charm" every time he skated around a question about Jon Snow or Melisandre or his own fate. Clearly, his time on Game Of Thrones has helped him become a better liar.

When E! asked Murray, who plays Gilly, about Jon Snow, she got straight to the point. "He's dead, for sure dead," she said before invoking the Kübler-Ross model, AKA the five stages of grief,

You know the whole stages of grief thing and the first one is denial? I think everyone really needs to move on past that, you can do some bargaining, but then you need to get to acceptance!

Do not play Murray in poker, that's all I'm saying.

Nutter is clearly a man who knows where his bread is buttered, because didn't feel any civic duty to tell POTUS the truth. According to Mashable, Nutter's exact response to Obama about what happened to Jon Snow was reportedly he's "deader than dead." I like to think Nutter wasn't really lying, and that he was just trying to keep things a surprise for the President. That's actually very nice of him and is in no way treasonous.

9. John Bradley Tried To Level With Fans About Jon Snow

Lying seems like a harsh word for what Bradley, who plays Samwell Tarly, did. He instead really tried to question why someone would want to have this plot line spoiled for them. he told USA Today,

Most of the time, the answer was the latter, which is why Bradley eventually gave up and told People Jon Snow was dead. "Sadly he is really dead," he said. "And I know that people find that hard to believe." Yes, they did. Because it was a lie.

10. Rose Leslie Lied To You For Your Own Good

Being that Leslie, who previously appeared on Game of Thrones as Ygritte, is Harington's girlfriend, she knew all along he wasn't dead. But she told Digital Spy that she lied so as not to spoil anything for anyone else, mainly because she would have hated it if someone spoiled it for her. "I'm now the one saying 'I don't want to know!'" she admitted. "It's 'Pipe down — I don't want to hear!' — so I've realized now that I have to keep a lid on it if I happen to know something." She does this for you, the fans. Don't forget that.

11. The Game Of Thrones Creators Lie To Everyone

"You just get the call and it's nice of them to do that," Rheon said. "They do a little joke, when you get that call, you know what's coming." Liam Cunningham agreed that it can be funny, telling Metro.us that they throw in red herrings to fuel on-set gossip. "The two guys, do terrible things to the actors just to watch the speculation, watch the ripples flow through the cast," Cunningham said. "It’s funny, it’s really funny. But we play the game."

While, you may be upset that these people lied to you, reading this list, it's hard not to feel bad for them. Game Of Thrones really tests your loyalty — and your mental toughness.