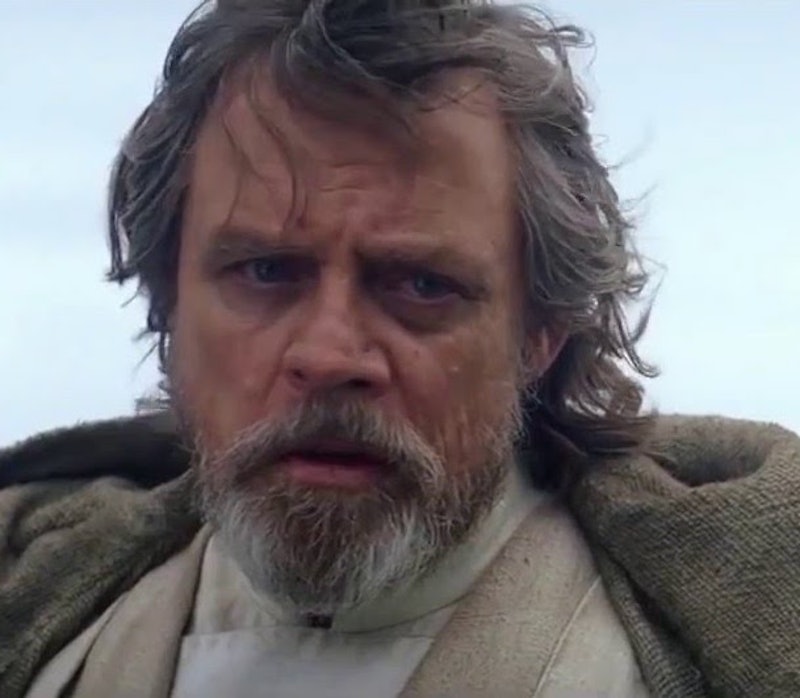 Star Wars fans came face-to-face with the devastating loss of Han Solo at the end of Star Wars: Episode VII — The Force Awakens. Seriously, even the Force itself couldn't protect us from those major feels. However, perhaps we don't need to guard ourselves for yet another heartbreaking moment anytime soon. With Rogue One: A Star Wars Story consisting of mostly new characters and Star Wars: Episode VIII not set to be released until 2017, there's a chance that Disney and Lucasfilm may gift us with time to mourn before they pack on more drama. And, with the help of Mark Hamill's latest tweet, fans can breath a sigh of relief when it comes to the fate of the legendary Luke Skywalker. Because Mark Hamill will most likely return for Star Wars: Episode IX .

Prior to the release of Star Wars: Episode VIII, Hamill took to social media on Tuesday to share his sweet, sweet relief upon shaving his beard. With filming for both Episode VII and Episode VIII behind him, the actor doesn't need to sport his Obi-Wan-like facial hair any longer. However, he was also sure to clarify that the video of his beard coming off is not in response to the end of Luke Skywalker. As Hamill was sure to include the blurb, "(at least til #EpisodeIX)" in the caption. *Exhales*

And, considering Luke's lack of screen-time in Episode VII — and his new position as Rey's Jedi Master in Episode VIII— it's only fair that he sticks around a tad bit longer. So, yes, Princess Leia and the rest of us won't be losing Luke Skywalker anytime soon — we just found him. And something tells me his story is still just getting started. Despite the fact that this isn't the first time that Hamill had to shut down the fears of his fans. In June, the actor took to Twitter to confirm that he did not mean to say he's "out of work" post-Episode VIII filming. And, following his secretive position in Episode VII , fans were also able to calm down to find that he has yet to prominent.

So, basically, fans can just take a chill pill. The Force is still with us and Luke isn't going anywhere anytime soon. Mark, enjoy your clean shaven face. Episode VIII hits theaters December 15, 2017 and Episode IX is currently set to be released May 24, 2019.