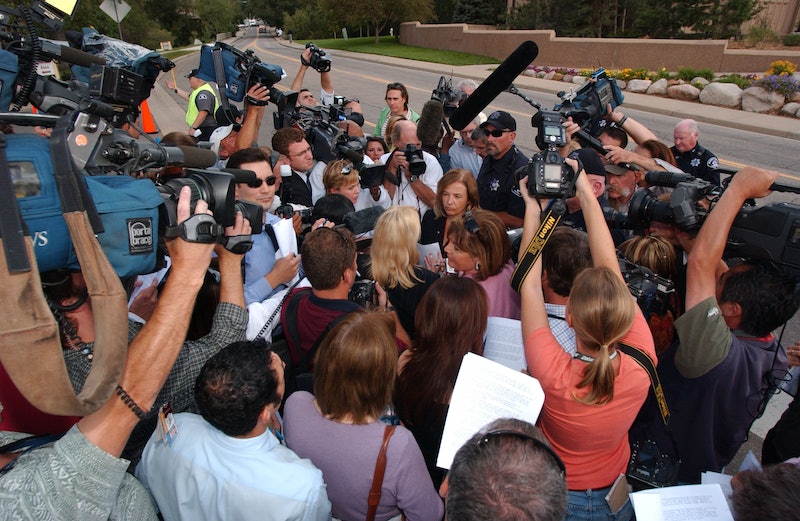 Nearly 20 years ago, the world was absorbed by the tragic murder of JonBénet Ramsey. The 6-year-old pageant queen was found dead in her home on Christmas in 1996, after her parents reported her as missing and found a ransom note demanding money for her release. Despite her parents and brother initially emerging as suspects in the crime, the case remains unsolved and one important question remains: was anyone ever arrested for JonBénet's murder?

Yes, but there's a catch. In 2006, teacher John Mark Karr was arrested in Bangkok on unrelated charges. During the investigation, he confessed to killing Ramsey, saying that it happened "accidentally" after he allegedly drugged and sexually assaulted her. However, his account of her death raised questions, and eventually Karr was cleared by DNA evidence.

Throughout the years of investigations, Ramsey's parents were suspected of killing her, and the narrative of mother Patsy Ramsey allegedly covering up child abuse by killing her daughter took center stage in the national discussion. In 1999, a grand jury charged John and Patsy Ramsey with "knowingly, recklessly, and feloniously" placing JonBénet in a position that led to her death, but prosecutors did not file criminal charges, and the indictment was not released until 2013 after DNA evidence had cleared the parents of her murder.

The unsolved murder case is now back in the public discussion since CBS, Lifetime, and A&E announced a docuseries, movie, and documentary based on the crime, respectively. In CBS' production, titled The Case of: JonBénet Ramsey which premieres on Sept. 18, people originally involved in the case will be featured, such as forensic scientist Dr. Henry Lee; former chief investigator for the District Attorney in Boulder, Colorado, James Kolar; and leading forensic pathologist Dr. Werner Spitz, according to The Hollywood Reporter.

We'll see if any new light can be shed on the case through these TV representations. The timing of the shows is probably not coincidental, as TV is going through a bit of a true-crime phase and, of course, we're approaching the twentieth anniversary of Ramsey's sad death. In the last few years, series like HBO's The Jinx, the podcast Serial, and Netflix's Making a Murderer have gained attention in popular culture. Chances are, these new programs, set to air in the upcoming weeks, will follow trend and maybe even help to uncover facts about the case you didn't know before.