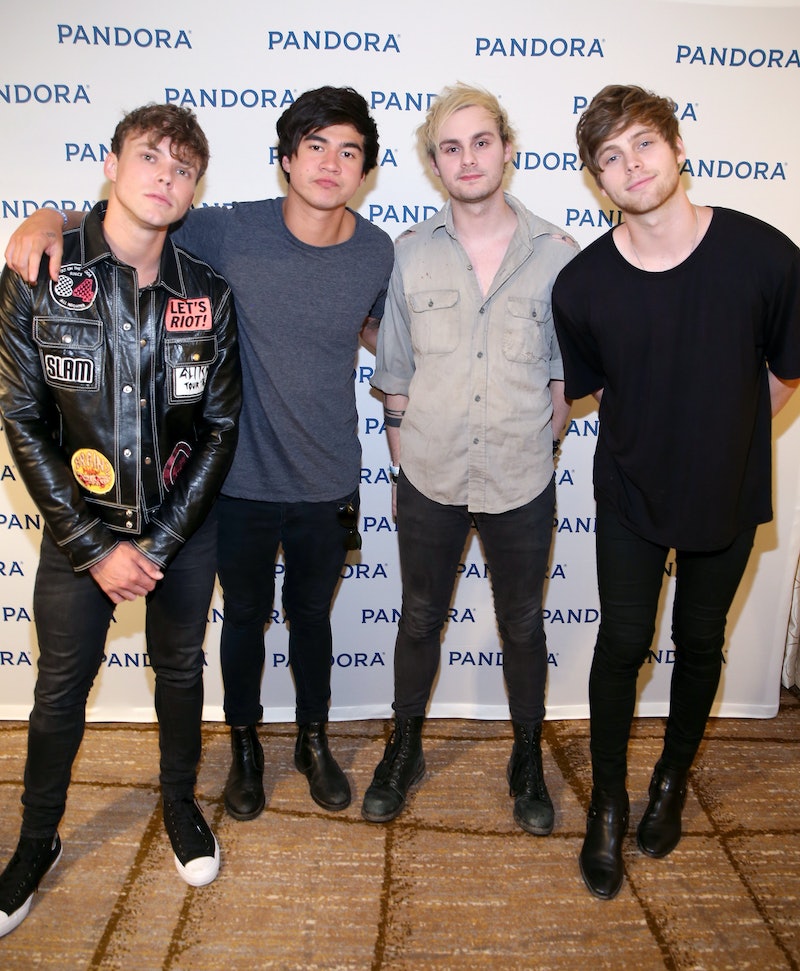 For anyone who had a crappy seat at #SLFLSpokane (5 Seconds of Summer's Sounds Live Feels Live tour stop in Spokane, Washington), the band attempted to remedy that on Tuesday night by encouraging every single fan in the nosebleeds to come on down to the floor to party it up for the last six songs of their set. Noticing that the entire back section of the floor was not at capacity (and yet, there were still many fans honoring their tickets and sitting much further back), 5SOS instructed fans to leave their seats and come to the floor in a moment that essentially caused an avalanche of fans to sprint their way to the general admission section. Needless to say, the fans were certainly appreciative of the moment — even if security wasn't.

"You see that big empty space on the back on the floor? ... I want you to fill it up. I want everyone to walk into that back part. Don't let anyone stop you. Just go," Ashton Irwin yelled to the arena behind his drum kit. "Everybody back there. Everyone down, let's go! ... We're gonna wait til the back part fills up. That's right. Everyone back there. Don't let them stop you. Jump over the f*cking barriers, I don't care."

Of course, once everyone had Irwin's seal of approval, fans immediately raced to the floor in droves, scrambling out of their seats so fast it was practically Usain Bolt-style. If rushing the floor was an Olympic sport, 5SOS fans would get the gold.

But it's clear the kindhearted gesture by the band was met with some serious ire (and probably panic) by security, who must have quickly ushered fans off of the floor — because a few songs later, Luke Hemmings took notice and proceeded to call out security for moving the crowd.

While I can't really fault security for trying to maintain some crowd control, I can definitely commend the band for trying to give their fans the best concert experience possible. Having gone to an embarrassing amount of SLFL shows myself — and seeing firsthand the joy on a fan's face at #SLFLCamden as the woman next to me in the pit handed her an extra ticket for third row center — it pretty much goes without saying that the closer you are to the stage (and therefore the closer you are to the band and the music), the more incredible the concert.

And it was this moment in Spokane, when Irwin went out of his way to ensure that fans had the time of their lives and Hemmings berated security for not allowing it, that shows a band who truly wants their fans to have the best 5SOS experience they can. It's a moment that showcases just how protective the band is of their fans, and not just vice-versa. And it was not only appreciated the fans who were in attendance, but by the 5SOS Fam as a whole, as the whole incident immediately zipped its way around Twitter while the concert was still happening.

After the show, Irwin reiterated his stance on the band's attempt to get fans closer to the stage:

And, once again, proved that fans are 5SOS' number one priority. My obsession is justified.