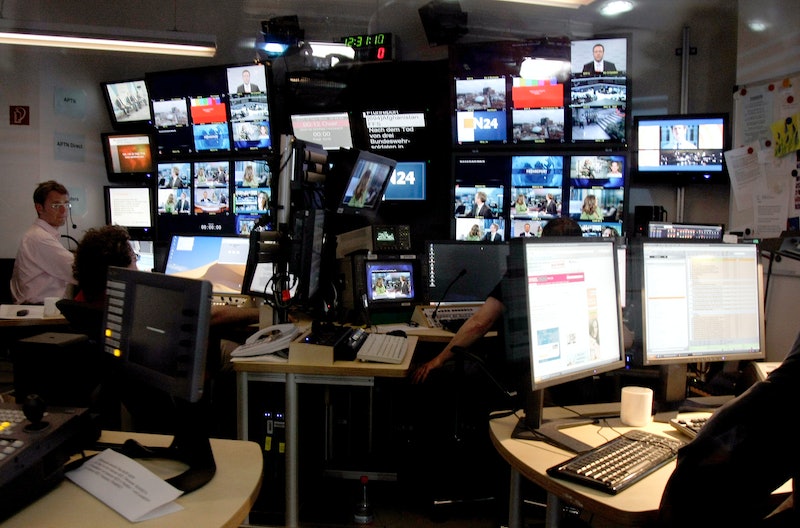 WDEA, a radio station in Ellsworth, Maine, has come under fire after posting an online poll asking listeners to vote on the "hottest" female news anchor in Maine. Ew.

According to the Maine Sun Journal , "DJ Fred Miller of radio station WDEA, owned by Townsquare Media, posted a poll on the station’s website Monday morning asking readers to vote for 'the hottest TV newswoman in Maine'. The poll lists six TV news reporters and anchors."

But the fact that the poll asked listeners to vote on professional women's looks wasn't the only ridiculous thing. It also described the women in sexist terms; one description of a reporter who speaks more than one language said DJ Fred Miller was "so awestruck we can’t form a word in any language.”

People (rightfully) were pissed off about the poll. Several of the women included in the poll had declined to give permission for their pictures to be published, but they were published anyway. Mike Redding, the news director for NBC affiliate stations WLBZ in Bangor and WCSH in Portland lambasted WDEA for including his anchors, Melissa Kim and Jackie Ward, even after they declined to be included in the poll. He called the poll "sexist and objectifying" and said, “They find it demeaning, and I find it demeaning. Our whole newsroom is offended by it. No journalist worth her salt would participate in a contest like this.”

I'm sure he's right that most serious female journalists wouldn't want to participate in a poll of this kind, but the greater issue at work here is that there's people out there who think this kind of thing is an ok way to speak about professional women in the public eye. Still, not every female journalist was offended. Reportedly, Nicole Gerber, one of the anchors included, posted the link on her social media pages, asking fans to vote for her.

On Monday afternoon, WDEA changed the wording of the poll and posted an apology that reads: "It seems we offended a few of you out there with our use of the word 'Hottest' to describe these lovely and talented journalists. It was not our intent to offend, so we’ve changed it to 'Favorite'."

While I guess (emphasis on guess) it's good that the station changed the wording of the poll, it would have been much more respectful to just take the whole thing down altogether, especially considering that two of the women included still did not give their consent for their likenesses to be used. I mean, taking away the sexist and objectifying language is one thing, but doesn't totally absolve the inherent sexism of the situation.