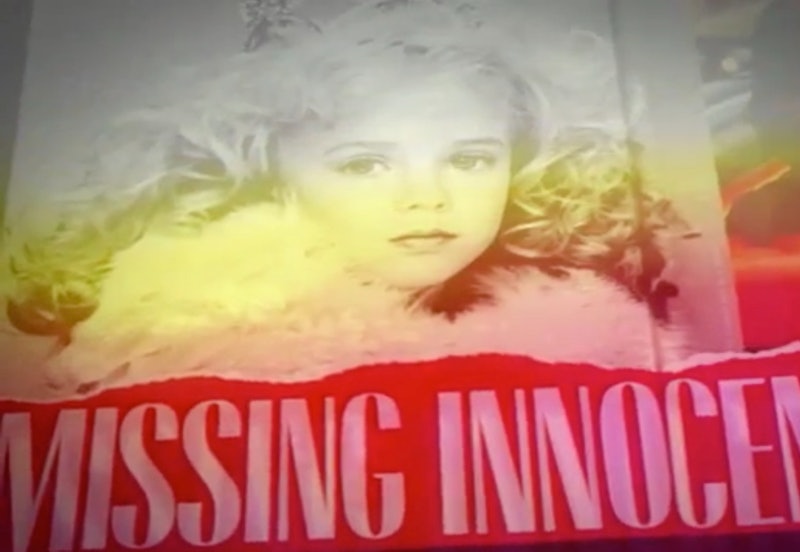 True crime stories are trending big time on television now. Though shows of this genre often focus on the accused criminal, at the heart of these gripping shows and specials, like The Jinx and Making A Murderer, are victims whose lives and loved ones were forever changed by a senseless crime. But when it comes to the story of JonBenet Ramsey, the utterly chilling sense of loss cannot be ignored. That’s what makes the trailer for the upcoming The Killing of JonBenet: The Truth Uncovered documentary on A&E even more chilling than any true crime story we’ve seen before. Rather than focusing on the accused, because there is no accused, the focus of this A&E special is solely on what happened the night that Ramsey was killed in 1996.

And that might be because Ramsey herself became the fascination of the entire country. Twenty years ago, when she was found dead in the basement of her parents’ house, the case became a tabloid fixture — and over the course of the decades-spanning investigation, went unsolved. It was the story that had America in its grips, which is why the teaser for this new special — which aims to uncover the truth of what happened to Ramsey that night — is impossible to look away from. It promises the documentary will shed more light on the mysterious case, and perhaps finally answer some questions that have long gone without acknowledgement.

The special is one of many iterations of the JonBenet story coming to television soon. The Killing of JonBenet on A&E will be followed up soon after by JonBenet: An American Murder Mystery on Investigation Discovery and The Case Of: JonBenet Ramsey on CBS. So, set your DVRs, and prepare yourself for a long fall of enough true crime stories to get you all the way through to winter.

You can watch the entire teaser here.