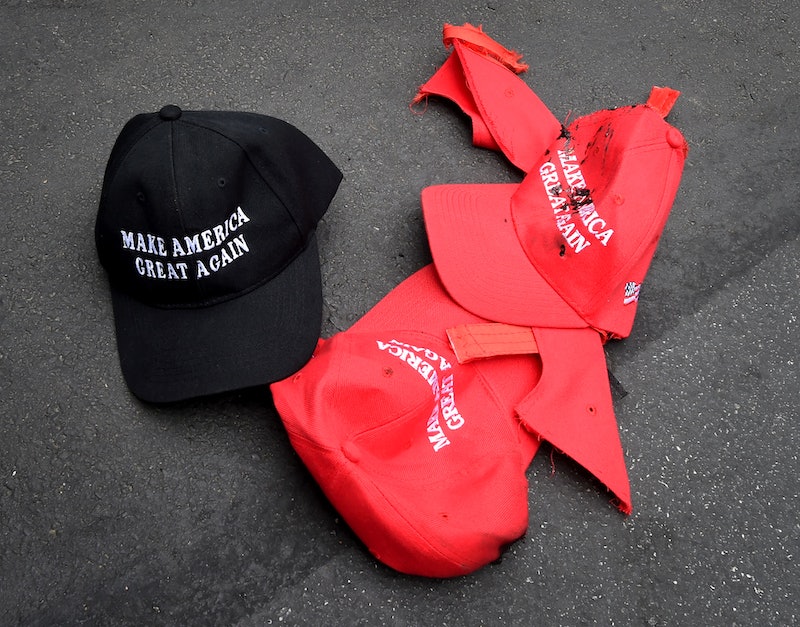 The worlds of fashion and politics were both immensely blessed on Wednesday night, when Rudy Giuliani was spotted wearing a "Make Mexico Great Again Also" hat. The former mayor of New York City was wearing the hat during a speech in Phoenix, in which he introduced Donald Trump before he took the stage to talk about immigration. Of course, such a statement accessory immediately begs the question: Can I buy a "Make Mexico Great Again Also" hat — whether for myself or my questionably xenophobic uncle?

While the hat appears to be an obvious spinoff of Trump's classic "Make America Great Again" hats (and hideous visors), it's currently unavailable for purchase in the Donald J. Trump campaign store. And in case you were wondering who was the genius behind the brilliant phrasing, Trump's campaign confirmed that The Donald himself coined the term, according to Bloomberg's Joshua Green.

The awkward and redundantly-worded "Make Mexico Great Again Also" hat was later sported by Alabama Sen. Jeff Sessions. I like to think that the night before, he and Giuliani were watching episodes of Fashion Police and carefully coordinating their ensembles to convey the message "I love Mexicans! I just want them to stay away!"

While the hat is currently unavailable to the #MAGA crowd, I imagine even some of Trump's loudest Mexican critics, like former Mexican President Vicente Fox, would want a hat proclaiming "Make Mexico Great Again Also." It's just that Fox would just have a very different plan from that of Trump and his supporters for how to do so. Fox has denounced Trump, and tweeted in response to the Republican nominee's visit: "I invited you to come and apologize to all Mexicans. Stop lying! Mexico is not yours to play with, show some respect."

For Fox and those who agree with him, making Mexico great again would likely mean getting Trump to stay away and shut up. That's a hat they could probably get behind.

While the legions of fashion-lovers and confused xenophobes alike wait impatiently for the hopeful release of these hats, the faithful people of the internet have brainstormed some other possible hat ideas for Trump's campaign. After all, if Trump has the ability to renew greatness in America and Mexico, who's to say he can't do it for Canada and Guatemala?

Trump himself has yet to reveal whether or not he'll be releasing the latest hat for the general public to purchase, but considering the fact that Trump spent over $207,000 on hats in June alone, it wouldn't be surprising if he soon released a whole line of hats promising threats of "greatness" to different countries.

More like this
How To Support Gun Control Reform Right Now
By Morgan Brinlee and Carolyn Steber
'The Undeclared War' Took Inspiration From This Gavin & Stacey Location
By Maxine Harrison
How To Fight For Reproductive Rights, Based On How Much Time You Have
By Courtney Young
How 5 People Upended Their Lives To Fight For Abortion Rights
By Hannah Smothers
Get Even More From Bustle — Sign Up For The Newsletter