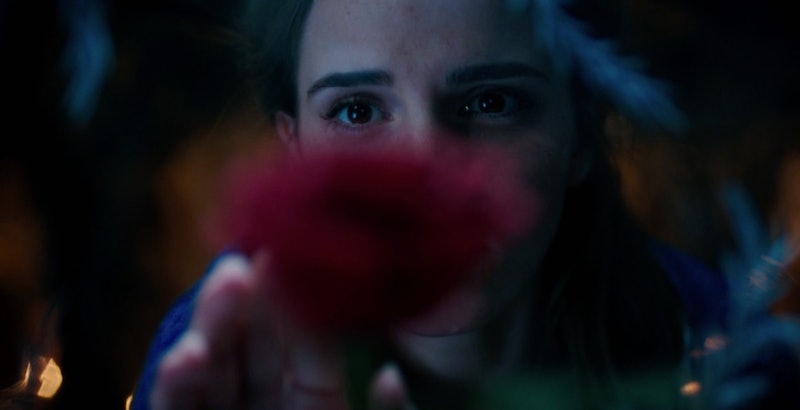 It'll be another year before Emma Watson helps to resurrect every '90s kid's childhood by portraying a certain book-loving brunette named Belle (sorry kids, Harry Potter isn't being rebooted yet). But, that doesn't mean fans are going to be left without any previews or hints until 2017. For instance, a Beauty and the Beast featurette has already hit the web, and trust me when I say it's guaranteed to make you swoon. In it, Watson and co-star Dan Stevens talk King Arthur at a table read, just like they're a regular ol' indie rom-com couple bantering about books — but, considering they're Belle and the Beast, this sort of banter is significant to their relationship. Additionally, even though it's just a sliver of a scene from the upcoming film, it genuinely demonstrates the chemistry between Watson and Stevens, as well as hints that a romantic plot line between the two may be heavily featured in the upcoming film.

Of course, a romance story line between two lead characters would be nothing new for a Walt Disney Pictures film. In fact, modern Disney films are generally really good at painting sweeping, whimsical, fairytale romances that bear significance. In other words, it's not even a little bit common to see a romance in a Disney film these days that lacks basis. It's romance that's there not only because the plot line hinges on it, but also because there is evidence in the film that two people should be together. Frozen even poked fun at the baseless romance trope through the story line between Anna and Hans that involved Anna seeming to love Hans for no reason other than they "finished each other's sandwiches," only for it to turn out she didn't know him at all.

Unfortunately, though, this hasn't been true of Disney animated films throughout history. In the '90s, for instance, which is when the animated Beauty and the Beast was released. Though that film does have some progressive moments — we see Gaston aggressively pining for Belle and her rejecting his arrogant advances because she wants adventure in the great wide somewhere (and also because he's The Worst) — the bottom line is that we never really get to understand why Belle falls in love with the Beast in the first place. What did they have in common?

Their camaraderie seemed to mainly evolve from the moment Belle graciously bandaging the Beast up when he gets hurt. From there, affections naturally develop as they run through the seasons of the year together and each displays small acts of kindness. But, with Belle and the Beast's egregious differences (Belle being a bright peasant girl, the Beast being royalty-turned-furry warthog) there isn't anything to suggest that they're an actual match. The Beast has a library and Belle loves reading, sure, but that could just be because the Beast lives in a castle — a library being present is like the royal equivalent to having the password to your parents' Netflix account. Apart from there being a copious amount of books in the palace and Belle being an avid reader, there isn't anything that shows these two are really meant for each other.

That said, I'm glad to see that this live-action reboot is bringing the story into 2016 with a little bit more character development and chemistry. Belle's greatest passion is reading, and to hear that the Beast is actually cracking open a book — even if it's just to low-key impress her — says a lot more than the castle simply having a library. It's really important from both a narrative perspective and even (to some degree) a feminist perspective that you show reasons why Belle falls for the Beast. Why else would one remake a classic film if not to improve and embellish on it?

You can check out the featurette below, although the big picture won't be fully explained until the film hits theaters March 17, 2017. Beauty and the Beast may be a tale as old as time, but it seems can trust Watson and company to make sure that relationship doesn't feel outdated.