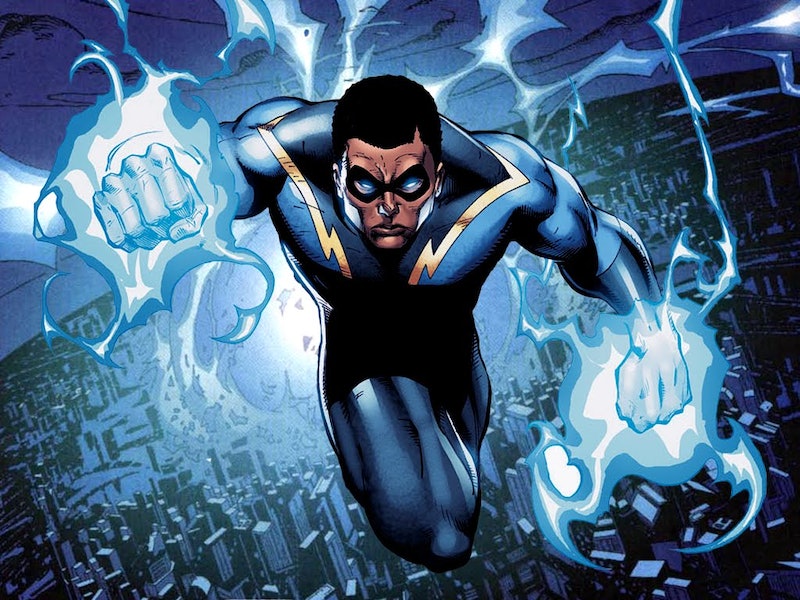 Marvel may be taking over Netflix with shows like Daredevil and Jessica Jones, but DC Comics is building their own superhero universe on broadcast television. The success of shows like Arrow, The Flash, Legends of Tomorrow, and Supergirl have paved the way for even more new faces to get the chance to lead their own series in the DC TV Universe. DC television mastermind, Greg Berlanti, is teaming up with Warner Brothers to create a television show for DC Comics hero, Black Lightning. However, considering he's not Batman, Superman, Wonder Woman, Aquaman, or the Flash, there might be quite a few people scratching their heads and going, "who is Black Lightning?" Take my hand, friends, and I'll tell you.

Black Lightning is an African-American superhero, who has appeared in 657 issues of DC comic books since 1977, according to Comic Vine. The character himself, Jefferson Pierce, is a wildly successful teacher at Metropolis' Garfield High and also prides himself as an Olympic-winning Decathlon star. However, his power to conduct electricity makes more superhuman than the average Olympian. In fact, Comic Vine states that he can react and move at the speed of light, he can fly, and he can "generate, control, and manipulate electricity."

Considering his powers are basically a mix of those of the Flash, Green Lantern, and more, I can totally see why Berlanti was interested in adapting Black Lightning to the small screen. Honestly, I'm surprised Black Lightning hasn't grown to be more popular over the years — especially considering the fact that, at times, he's even appeared as a member of the Justice League. I mean, they could use all the help they can get.

Of course, the show would also touch more on the life of Jefferson Pierce when he's not exercising his superhuman abilities. Pierce isn't new to his super suit at all. According to Entertainment Weekly, the log line for Berlanti's Black Lightning series is centered around his return to fighting off evil — when his daughter's well-being is on the line.

Jefferson Pierce made his choice: he hung up the suit and his secret identity years ago, but with a daughter hell-bent on justice and a star student being recruited by a local gang, he’ll be pulled back into the fight as the wanted vigilante and DC legend — Black Lightning.

There's no word yet on who exactly will be cast as Black Lightning, but, considering the role calls for an African-American superhero old enough to have a grown daughter "bent on revenge," we could be seeing some amazing new talent step into the predominantly DC TV line-up. Until new details are revealed, we can all just sit here and hope that Berlanti's original plans pan out. Despite the upcoming Justice League movie, the introduction of the Suicide Squad, and the CW's massive crossovers, DC Comics fans still need Black Lightning in their lives.