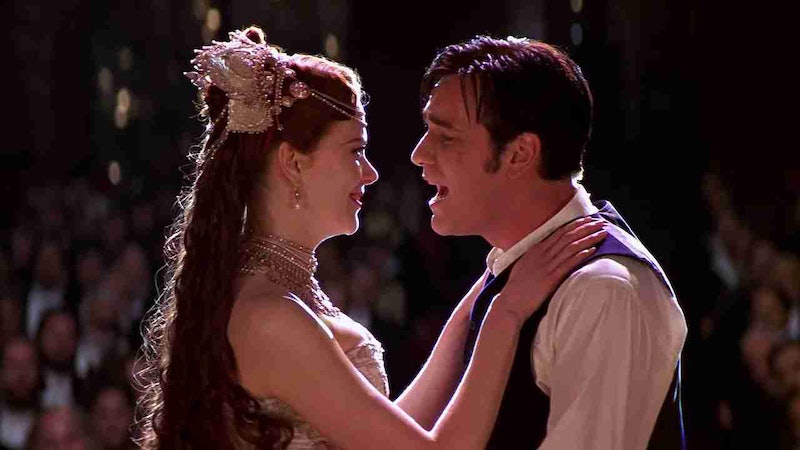 Get ready for a spectacular spectacular. In what seems like an "I'm surprised this hasn't happened sooner" move, Playbill reported Thursday that Baz Luhrmann's 2001 film Moulin Rouge! will be adapted into a stage musical titled Moulin Rouge! The Musical. According to the theatre magazine, Tony Award-winner John Logan will be writing the book for the production, and Tony Award-nominee Alex Timbers will be directing, both with Luhrmann's blessing. Details about the musical's production timeline, as well as its anticipated opening venue, have not been revealed — but let's be real, that's not the biggest thing starry-eyed dreamers are worried about. No, the heart underneath all the fanfare in Moulin Rouge! is the romance between optimistic writer Christian and scarlet-haired courtesan Satine. And, considering that the chemistry between the actors who portrayed them in the film was part of the couples' charm, it's worth wondering whether or not those actors, Ewan McGregor and Nicole Kidman, will star in Moulin Rouge! The Musical.

Oh, my sweet, innocent baby fawn. I don't want to say it'll never happen because, as of right now, casting has also yet to be announced — and considering that news of this production is still fresh, it may be some time before the leads are cast. However, even with all of that in the air, I'm going to safely wager that there's still a slim chance McGregor and Kidman will return.

Think about it this way. Moulin Rouge! hit theaters in 2001, so that means it's 15 years old and that it was born in an era where Christina Aguilera was still going by "Xtina" and applying massive amounts of eyeshadow like it was her job. Now, though, the film is basically old enough to be entering its sophomore year in high school, and stars McGregor and Kidman have moved on their careers. Plus, at 45 and 49, respectively, they're both a bit older than the characters, Christian and Satine, are meant to be. No matter which way you look at it, the duo's return wouldn't make sense.

So, yeah, I think it's fairly safe to assume that Moulin Rouge! The Musical will hire new actors to portray the story's core couple, just as I think it's fair to hope that the new kids will share the same high-intensity chemistry that McGregor and Kidman shared in the 2001 film all those years ago. Really, as long as they bring back the beauty, truth, freedom, and love, I'll be good.

More like this
Sadly, You Can’t Stream 'Elvis' — Yet
By Morgan Leigh Davies
Photos Of The 'Elvis' Cast vs. Their IRL Counterparts Will Have You All Shook Up
By Grace Wehniainen
Chris Hemsworth Joked That Baring His Butt In ‘Thor: Love And Thunder’ Was A “Dream”
By Brad Witter
Taylor Swift's “Carolina” Theme For 'Where The Crawdads Sing' Soundtrack Is Here
By Jake Viswanath
Get Even More From Bustle — Sign Up For The Newsletter