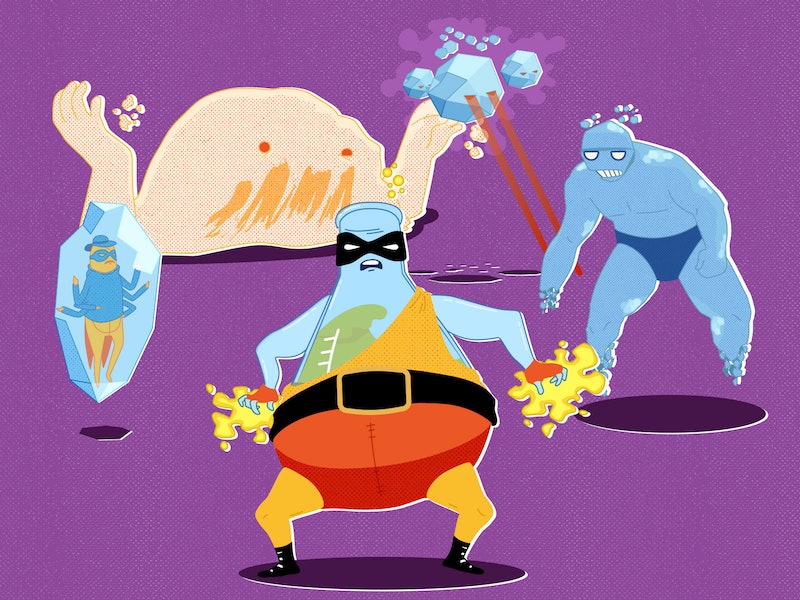 I never used to pay much attention to food labels. I just took whatever I was buying at face value, and figured that as long as the loaf of bread, or cup of yogurt, or frozen meal I was tossing into my shopping basket wasn't a sleeve of donuts (okay, sometimes those made their way into my cart too), I probably wasn't eating anything too bad for me. Then during a trip one summer, I found myself stocking up at the grocery store with my health-conscious best friend. She started reading off the list of ingredients on each package in the frozen aisle — and proceeded to have a meltdown. "Why are there so many things on here that I can't pronounce?" she kept saying, as she rifled through the selection to try and find a healthier alternative. When I looked for myself, I found that she was completely right. Ingredients I had never heard of and (definitely couldn't pronounce) flooded the ingredient list. Which got me thinking, what's really in frozen foods, anyway?

There are a lot of seriously bizarre ingredients listed on the back of frozen food packages. That's why we've partnered up with Evol, a frozen food company committed to making real food that tastes delicious. We put together a list of freaky frozen food ingredients (that you won't find anywhere on Evol's food labels) — and had our team of talented illustrators take a stab at imagining what else they could possibly be.

What it is: Polysorbate 80 is a synthetic compound. In case you're struggling to remember what that means from your high school Chem class, it's not a naturally occurring chemical — it was created in a lab, made out of the dehydrated compounds found in sugar alcohols.

What we think it is: A science experiment turned mutant madman.

What it does: It's used to bulk up foods, and keep frozen sauces smooth. Sometimes it's even used as a binding agent in ice creams and puddings.

Why you don't need it: Because, wouldn't you rather eat a smooth sauce that doesn't have some creepy synthetic compound in it? From creamy tikka masala to flavorful ginger soy, lab-made chemicals are not on the menu.

What it is: Butylated hydroxytoluene (or BHT), is a chemical compound made out of a type of acid called carbolic acid. Fun fact: The acid that BHT is derived from is known to cause chemical burns if handled in large amounts. Tasty, right?

What we think it is: A six-armed, bug-like, master mime super villain.

What it does: BHT is used as a preservative in frozen foods, since it prevents foods from oxidizing, therefore extending shelf life. Sounds like some sci-fi stuff, am I right?

Why you don't need it: Because we're living in 2016, a time where you don't have to eat a meal that's being mummified by some weird compound. Ready-made meal options sans the preservatives? What a time to be alive.

What it is: Another one of those lab-made additives, made through an electrolytic process similar to fusing metals together. Seems a bit dramatic for frozen food, no?

What we think it is: A melty, mischievous shapeshifter that lives under your bed.

What it does: The short story is that it makes dough rise faster, and makes bread thicker. So if you were wondering why the bread on your frozen breakfast sandwich was so unnaturally thick, you've probably got those bromates to thank.

Why you don't need it: Because, do you really want to be eating a breakfast burrito on steroids? Didn't think so. Plus, when there are options like chicken apple sausage, egg, smoked gouda, caramelized onion and tomato breakfast burritos out there on the market sans additives, why would you?

What it is: Propyl Gallate is an "ester," or a chemical compound that's derived from an acid. In layman's terms, it's a thing made from a thing that's then made into another thing. Meaning, it's not natural.

What we think it is: A muscled-out monster that sweats acid. You don't want him as your gym buddy.

What it does: It keeps the oxygen molecules from mixing with the oil in frozen foods, in order to avoid spoilage.

Why you don't need it: Because there's a truffle mac and cheese out there that's got real truffle oil in it — and none of the chemicals or spoilage.

What it is: Another lab baby, sodium nitrite is an inorganic compound made by combining salt with nitrites, a chemical ion. Actually, it kind of looks like the thicker version of salt. But trust us, you don't want to mistake the two.

What we think it is: A malevolent trio of laser-happy hooligans.

What it does: It acts as a curing agent for meats like bacon, ham, etc. The way it does this, however, is to stop the growth of micro-organisms on these meats. Kind of like hand sanitizer, but for your food.

Why you don't need it: We have a personal issue with anyone who tries to put weird chemicals on our bacon. This spicy uncured bacon, egg, roasted potato, jalapeño, and cheddar breakfast burrito, though? None of that happening here.