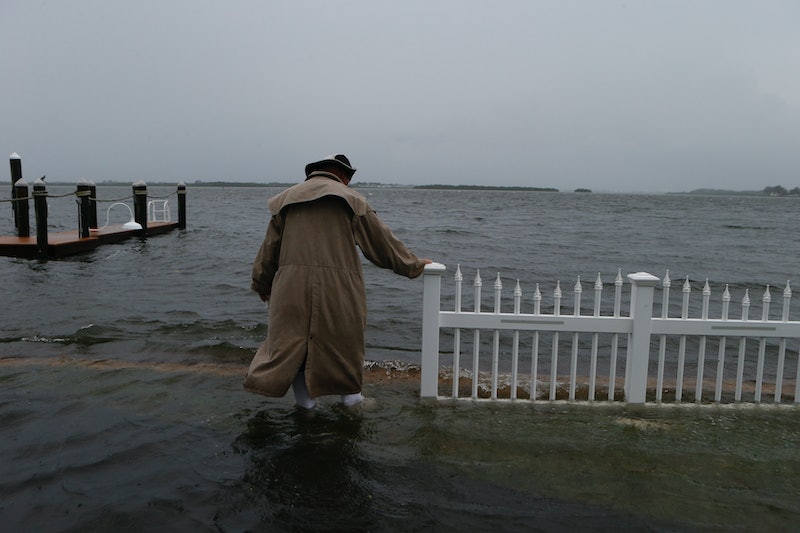 The first hurricane in 11 years has made landfall in Florida near St. Marks, and the water is rising by the inches. News crews from around the country have moved into the area to capture the potential damage caused by an untimely combination of rainfall, high tides, and surges. And as the Category 1 storm hit the part of the state where the peninsula meets the panhandle on the Golf Coast south of Tallahassee, winds reached about 80 miles per hour. Here, the storm could do real damage despite the small size of the town. In fact, St. Marks, where videos of rising water levels are being taken, has a population of just around 300 people.

One of the journalists that's already in the area is Ginger Zee, the head meteorologist for ABC News. She has uploaded videos to Twitter from her bed and breakfast that show the water seeping in. The storm surge hasn't even reached high tide, but the first floor depicts what appears to be inches of standing water. She tapes the owners moving belongings to higher ground writing on Twitter, "I asked if I could help! I lit the way." She used her camera's light to illuminate the entryway below the staircase. There appeared to be no electricity in the house.

Zee is not the only one in the area sharing videos on Twitter. Reed Timmer, a meteorologist from TVN captured what was going on outside too. Water is high enough that people across the way are being evacuated by boat. In one video Timmer uploaded, there are clearly a number of rescue workers who seem to be waiting for more winds; Timmer noted that they are still in the eye of the storm.

Also outside is Mike Theiss, a National Geographic photographer and storm chaser. He must have been out at the same time as Timmer, because at the time he was filming, he said he was still inside the "calm eye" of the storm, but the flooding was intense. He filmed a boat motoring by. "It's basically a flooding situation here in St. Marks," Theiss said. He said he was filming from high ground but the entire area around him is covered by the storm surge.

The water had started to rise long before the hurricane actually made landfall. Earlier in the day, camera crews from local television were even capturing people in the area having fun on inflatable rafts. This was late afternoon and already water was reaching mid-calf on the people in the street. Kenny Morales, a sports anchor at WCTV also uploaded video from a flooded restaurant in St. Marks.

If you're wondering how the news anchors managed to capture all of this, check out Timmer's explanation of the day's plan. "Our game plan is to ride this out on the second floor balcony of the marina," he told the camera. The crew's vehicles are parked at about 8 feet in elevation, he says. "Not for sure safe," he adds. "I'm already up to my knees in flood water, waist deep in spots. We're just getting started."

Videos will continue to come in — potentially overnight — but many more are sure to appear Friday morning when the damage from the flooding and winds becomes increasingly clear.