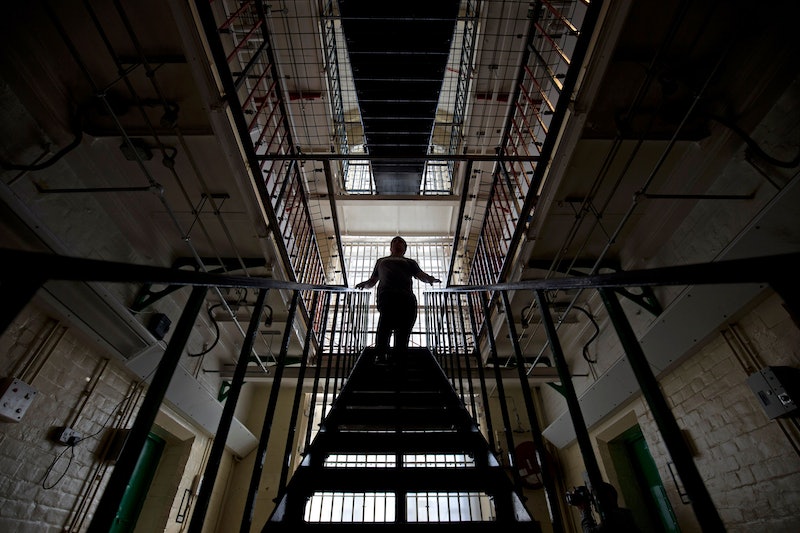 Even after all of the problematic coverage surrounding Brock Turner's sentence — the delay of his mugshot being released; the headlines that described his swimming times — mistakes are still being made. Minutes after Turner was released from a California prison in the early hours of Friday, quietly passing the hordes of angry citizens and reporters to climb into a waiting car, Time magazine ran an article about Brock Turner's release on its website that drew ire from many on Twitter. "Stanford swimmer Brock Turner to be released from jail Friday," Time wrote on Twitter, alongside an innocent-looking photo of Turner that sits in stark comparison with his disheveled main mugshot. Update: Following backlash, Time's tweet now reads: "Brock Turner released after serving 3 months for sexual assault."

Where do I start with this? The chosen image of Turner, which makes him look confused and lost? The headline describing Turner as a "swimmer," rather than "convicted felon"? The accompanying text pointing out that he was released after three months for "good behavior"? Let's zip back to three months ago — yes, just three months ago, when Turner was convicted of felony sexual assault for a crime so egregious it provoked nationwide outrage — and recall that Turner is no longer a "Stanford swimmer." Turner is a felon. Turner committed sexual assault. Turner spent a paltry three months in a California prison before being released — a punishment that almost every observer has noted is not in line with his crime.

Sports Illustrated also used the face-palm-worthy "Stanford swimmer" line, which makes zero sense because Turner is no longer a swimmer, nor is he at Stanford. For God's sake, Team USA even declared in a June statement that Turner would receive a lifetime ban from competing in the sport and would never be eligible to do so. Turner is a felon, a predator; Turner deserves to be described as such.

Depressingly, Turner's sentence isn't all that surprising — most individuals who commit sexual assault are never tried, let alone convicted. Additionally, privileged white men like Turner consistently face shorter prison terms and more lenient sentences than, say, a person of color arrested for being in possession of illegal drugs. Justice Aaron Persky famously said of Turner, if you can believe it, that he believed Turner's sentence would have a "severe impact" on Turner.

Just in case you need a reminder, here's part of the statement from the woman Turner assaulted, which you can read in full here:

I thought there’s no way this is going to trial; there were witnesses, there was dirt in my body, he ran but was caught. He’s going to settle, formally apologize, and we will both move on. Instead, I was told he hired a powerful attorney, expert witnesses, private investigators who were going to try and find details about my personal life to use against me, find loopholes in my story to invalidate me and my sister, in order to show that this sexual assault was in fact a misunderstanding. That he was going to go to any length to convince the world he had simply been confused.

All the mistakes made in Friday's reporting reflect the errors made in initial coverage of Turner's crime, which — you guessed it — referred to him repeatedly as a "Stanford swimmer."