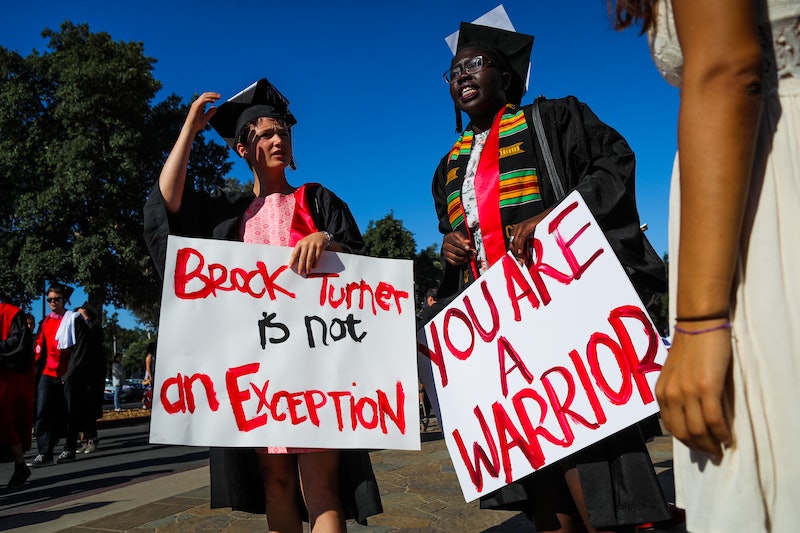 Many were outraged Friday morning to find that, after serving only three months of his already-lenient six-month sentence for being convicted of sexually assaulting an unconscious woman, Brock Turner was being released from prison. While angry and disappointed responses at Turner’s light sentence came from Vice President Joe Biden, California Sen. Barbara Boxer, and a host of sexual assault activists online, there seemed to be little discussion of the real elephant in the room: Rapists and sexual assault perpetrators get off with lighter sentences than Turner a lot of the time. In a 2016 investigation by the Boston Globe, the paper found that there were dozens of people convicted of rape who served no jail time at all.

Here are five cases with lighter sentences than Brock Turner's:

While technically a longer sentence than Turner’s, Austin James Wilkerson’s sentence allowed him to continue studying at the University of Colorado and working while serving time. Wilkerson was convicted of raping an intoxicated female student at a St. Patrick’s Day party in 2014, a felony charge which carried a possible sentence of four to 12 years. But Boulder District Judge Patrick Butler found himself dealing with Colorado’s Lifetime Supervision Act, a complicated law that, according to the Denver Post makes “any prison sentence for some sex offenders… essentially a life sentence with the possibility of parole.”

“Mr. Wilkerson deserves to be punished,” Judge Butler said. “But I think we all need to find out whether he truly can or cannot be rehabilitated.”

Williston, Vermont resident Mark Hulett admitted to raping a girl many times when she was between 7 and 10 years old. But Judge Edward Cashman, claiming he “no longer believes in punishment,” gave Hulett an amazingly light 60-day sentence. Backlash against the judge was so severe that he upped the sentence to 3 to 10 years. Hulett was released in 2011.

Sir Young of Dallas pleaded guilty to raping a 14-year-old girl in 2011, but Judge Jeanine Howard sentenced him to only 45 days in jail after stating that the victim “wasn’t the victim she claimed to be.” Howard referred to the fact that the girl had had three previous sexual partners and had previously given birth as part of the mitigating factors. “There are rape cases that deserve life. There are rape cases that deserve 20 years,” Howard said. “Every now and then you have one of those that deserve probation. This is one of those and I stand by it.”

John Enochs, a former student at Indiana University in Bloomington, was facing charges related to two separate incidents of rape. But as part of a plea deal filed in 2016, he pled guilty to a charge of battery. Even though the crime is considered a Level 6 felony in Indiana, the judge ruled it a misdemeanor. Enochs spent one night in jail when he was originally charged; after that he faces one year of probation and $183 in court costs.

David Wise of Indianapolis was convicted of six counts of felony rape after his wife reported that for years he had been drugging her and raping her while she slept. A jury convicted Wise of "one count of rape and five counts of criminal deviate conduct" in 2014, according to the Indy Star report. Judge Kurt Eisgruber sentenced him to 20 years; however, 12 of them were suspended and eight were to be spent in home confinement, which meant zero days in prison.

As upsetting as these cases are, they are only a sample of the light sentences perpetrators of sexual violence and rape have received — and that's just when they've been convicted. Turner’s release simply reminds us that the ability of our judicial system to respond to sex crime is in severe need of rehabilitation.