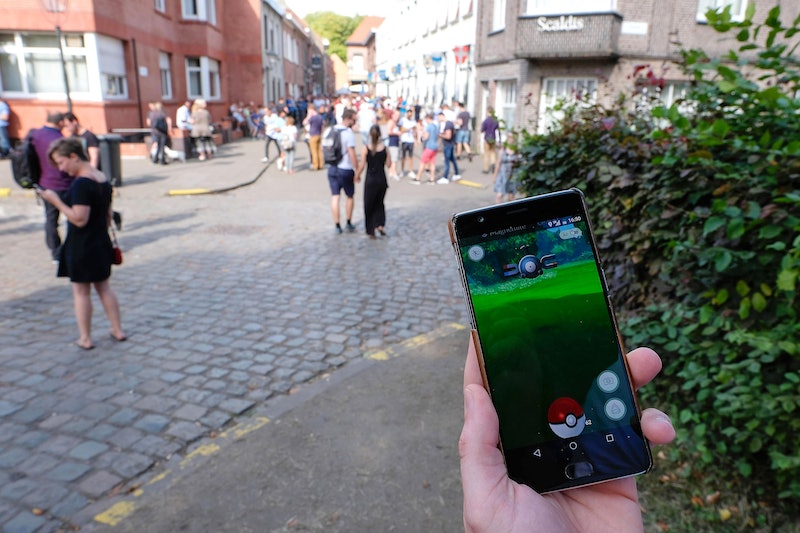 Pokémon Go, the newest iteration of a popular gaming franchise, recently took the world by storm. And the Pokémon Go buddy system promises to become a literal game-changer, if it materializes soon as promised. By some accounts, Pokémon Go is dropping off in popularity as the initial excitement of the craze dwindles. But with new features like the Pokémon Go buddy system, maybe Nintendo and Niantic can keep the game exciting and fresh for longer than first assumed. (Bustle has reached out to Niantic for comment and will update if/when we hear back).

The Pokémon Go buddy system was actually first discovered by dedicated Pokémon Go fans who helped to "datamine" the game. Basically this is a process of reverse engineering what the game currently does (and what it might be able to do in the near future) from functions written directly into the code. According to Pokémon Go Hub, the most recent version of Pokémon Go contains (in its code, though not in its user interface) the ability to calculate distances between two locations, award the user with candy for walking with a buddy, limit the amount of daily candy, limit the user to one walking buddy at a time, and control the appearance of the buddy (medium, large, flying, or on your shoulder).

The new presence of these bits of code in Pokémon Go very strongly suggests that the game is about to release some kind of buddy system, because why else would the developers put all that time and effort into creating them now? Based on the code, the buddy system would allow trainers to bond with a special Pokémon and travel around in close connection with it. As explained in Forbes, "what [the Pokémon Go buddy system] means in practical terms is that... you can choose a particular Pokémon and train it by making it your 'Buddy' and walking it around, which will award you with candy for that Pokémon in particular."

Following fan speculations, Niantic confirmed the Pokémon Go buddy system in a post titled "Go out and explore with your Buddy Pokémon!" Though Niantic does not provide a release date for the buddy system, it's allegedly "just around the corner." Sometimes those kinds of claims are false promises, but the fan datamining shows that the code required to power the buddy system is already functionally in place, so the buddy system probably really is coming soon! Until then, you can pass the time by plotting and scheming about which Pokémon will become your very first buddy when the big day arrives.

More like this
How To Change Your Instagram Bio
By Emma Carey
How to Delete (or Pause) Your Hinge Account
By Emma Carey
How To Protect Your Digital Privacy If You Need An Abortion Post-Roe
By Kaitlyn Wylde
What Is A “Softboy?” The TikTok Term & Aesthetic, Explained
By Courtney Young
Get Even More From Bustle — Sign Up For The Newsletter