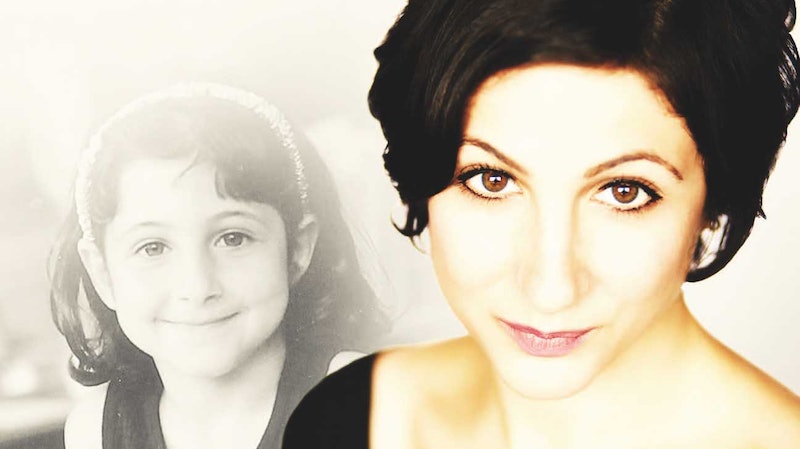 On Sept. 11, 2001, when I pushed open the double doors of my middle school and looked up, both of the Twin Towers were on fire, vomiting paper, spewing heat across my face. It looked like I had stepped out onto the set of a disaster film. Peoples’ screams were fading in and out as they clambered into each other. Cars were stopped dead along the West Side Highway. Camera crews were barking orders at each other. Ambulances were receiving people bleeding on stretchers. People were jumping from 100 stories up, facing along the sides of the World Trade Center, hitting cars below as they fell.

The sidewalk was packed with crowds standing shoulder to shoulder, looking up as plumes of smoke and ash billowed from the gashed mouths of both towers.

I was in the middle of it all when the first tower, then the second tower, fell — running for my life, getting covered in ash, believing I was going to die any second.

Hours later, I stood in front of our apartment building, in the middle of a storm of debris, dust, ash, and chemicals, holding my mom’s hand, watching as the towers still burned three and a half blocks away. We were the only two people around, praying that the payphone would work so we could let my dad know we were still there, and so were grandma and grandpa.

As weeks passed, and I continued to try and process the events of that day and what it all meant, life in the rest of New York City — and across America — “went back to normal." My family didn’t have that luxury.

I quickly understood, at age 12, that nobody could protect me anymore.

My neighborhood had become a war zone. Food had to be supplied by the hospital across the street. The power and the phones flickered on and off for days. National Guards hung around for months, along with evacuation warnings, more bomb threats, and the smell and the dust and the smog in the air. For a time, nobody got in, or out, of our area.

For two weeks, I was a 12-year-old off from school who spent her time lost in nightmares, panic attacks, flashbacks, compulsively checking on her grandparents and trying to picture how we would get them out when — not if — the next attack happened.

Eventually, our classes were relocated further uptown, and we were told — amid the ongoing chaos of living downtown and the continued orange alerts, anthrax scares, declaration of war, weapons of mass destruction, and the threat of suicide bombers — to start worrying about our introduction to algebra again.

The immediate symptoms of what I would later learn was Post Traumatic Stress Disorder didn’t go away, and other symptoms developed and got more complex over time. I quickly understood, at age 12, that nobody could protect me, my parents, or my grandparents, anymore.

Just because a body stays in motion doesn’t mean that a person is not dramatically changed by what happened to them. The body and mind naturally wants to avoid suffering and pain, and, for trauma survivors, especially young ones, help is needed in order to learn how to move from victim to fighter, then to survivor.

But when people who have experienced trauma don’t get help, or the right kind of help, sometimes we make “choices” that don’t feel like “choices” at all to us. Choices feel like a luxury that other people have. What we have is an overactive nervous system that never lets us rest, driving us to act impulsively in response to any number of aspects of daily life — driving us to try to get some relief however we can.

A fear of abandonment and of the death of my loved ones and myself, as well as an inability to trust and a "fight or flight" that was always turned on, made trying to live life as a teenager feel like a poorly written play.

I could barely sit through movies when they had explosions in them, or references to the military, or scenes of destruction. Anywhere that involved a crowd or a large gathering of people was avoided if it could be, painful if it couldn’t. Social situations become nightmares, not fun opportunities; I went into them scared, reluctant, to be around people. Sleepovers were out. I wasn’t thinking about what I could bring to the situation as myself, because I didn’t know myself yet. I just knew how I felt about everything: anxious and afraid. My own thoughts and feelings were so overwhelmingly upsetting and frightening that they felt like they could kill me.

As my mom will tell you, I had all the “makings” of a popular girl, and yet, I ended up eating my lunch in the school library alone, crying, and spending many weekends by myself in my room or up at grandma’s house, just the two of us.

I cut off friends at any sort of sign they were “plotting against me” or “didn’t really like me,” or if they said something that I took the wrong way. Because I was so overly sensitive to "perceived threats" and had a larger "reaction" than any given situation called for, I often ended up exactly where I feared I would be: alone.

By the time I was 18, I had seen eight therapists and psychiatrists, hoping each one could help fix me. I ended up worse for wear when talk therapy yielded no results and a series of misdiagnoses — ADHD, bipolar disorder — and medications that made me sick but didn't help at all.

I felt had one thing going for me that had some sort of value: my appearance, and my ability to drink straight from the vodka bottle. I didn’t enjoy sex — my body was just there, this thing that I didn’t regard it at all. I just wanted to feel some sort of connection and affection in the way human beings just need that from each other.

I liked guys who seemed like they had been through shit. There was a thrill that came along with going off with an older, tough-looking guy, getting drunk, and living to tell about it. Some days, I thought, maybe I’ll get lucky, and I won’t.

Throughout my teen years, despite all my pain, I was bright, I got good grades, and I was, at my core, a journalist.

How ironic, it felt, that the news was the very thing that re-traumatized me, with headlines and stories that fed off of fear and reinforced my belief that the world was a cruel and unsafe place. But the only thing I truly knew about myself (besides the fact that my female sexuality felt to me to be my only entryway to human connection) was that I was a writer.

So I chose my college based on its journalism and writing program — and, of course, it’s proximity to home, just a few subway stops. Yet in place of the independent young woman I should have been developing into, there was still a scared little girl who went through the motions of getting As and holding down an internship and a byline at a local newspaper, while scrambling to hide the fact that she was crying before class and popping Klonopin to soothe the panic.

I reached a point where I felt that one of two things were going to happen: I was either finally going to put an end to the suffering myself, convinced that if all those doctors couldn’t help me, I would never escape the brutal experience of just being conscious every day; or I could reach out one last time, and give it one last shot, before I did.

That last hope — known scientifically as Cognitive Behavioral Therapy — turned out to be the miracle I needed. In CBT, I learned that if I worked hard enough, I would be able to change the thoughts and behaviors that were not only making my life an inner hell, but contributing to even more problems that, though I couldn’t see it at the time, were of my own making.

I was able to start to try and soothe that scared little girl who was always on high alert in a healthy way. I started to put all of these broken pieces back together again and form something new, cultivating qualities like confidence, trust, a sense of inner calm. My journey led me to another type of therapy known as Dialectical Behavioral Therapy, and then to the rooms of 12-step programs and meditation centers. Ultimately, it led me to the office of a man who called himself a philosophical counselor, who introduced a lot of questions:

I would start to write stories about social good and nonprofits for no pay. I found a part-time job to pay the bills while I did that, knowing I wanted to commit to it. It was what made me happy — the world needed more headlines that didn’t scare the shit out of everyone, that focused on the fact that the world was not all bad and horrifying. If I wasn’t getting paid for it, it wasn’t a means to an end, so it counted as something that just made me happy.

Now, I had a real starting point and the chance to make a new beginning.

While PTSD can become a big part of someone’s life, it does not make up an entire life and cannot account for all of the choices we make. But just one day can change someone’s experience of the world around them forever.

That word "victim," in its literal sense, refers to someone who is suffering because of the harm — physical, emotional, and mental — caused by another person, or something bigger than themselves and entirely out of their control.

Its inverse, "survivor," is someone who can continue to cope and thrive in the face of continued challenges after that suffering, navigating the other difficulties that life brings in a healthy way.

No matter how you find your way back to “start,” it’s nearly impossible to do it alone.

And if we’re willing to work for a new beginning, we can clear out all of that stuff that makes us feel inherently “damaged” or “bad” or “dark” inside, making room for the capacity to feel real joy, and love, and lightness, and figure out what we’re doing here. We get the chance to “find ourselves” that even the best of us still struggle to do sometimes.

But before we can feel any of these things, before we can start to think about who we are and what we want, there is one thing we have to feel — and that is safe.