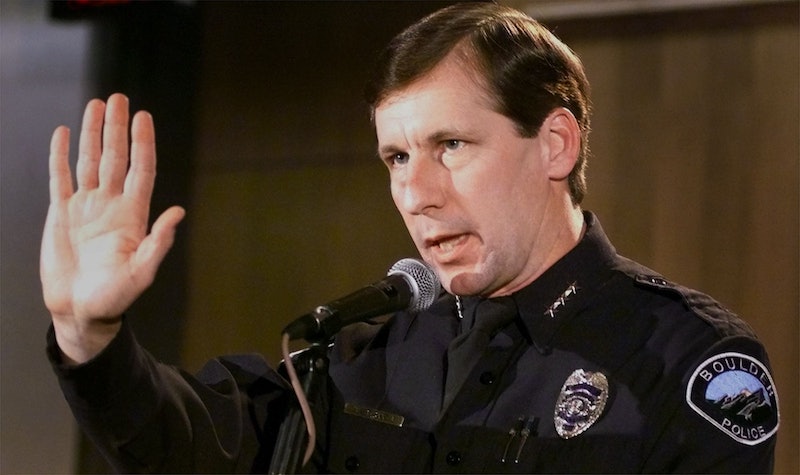 The 20-year anniversary of the death of child beauty queen JonBenet Ramsey has sparked renewed interest in the unsolved homicide that once dominated newspaper and tabloid headlines. A&E dropped a two-hour documentary, The Killing of JonBenét Ramsey: The Truth Uncovered over Labor Day while CBS prepared to debut The Case Of: JonBenét Ramsey, its own docuseries on the investigation, later in September. Both have already thrust many of the investigation's key players back into the spotlight as public interest grows once again. So, where is former Ramsey Police Chief Mark Beckner now? The former Boulder, Colorado, police chief was once the lead investigator on the high-profile Ramsey case.

December will mark 20 years since Ramsey's death. The body of the 6-year-old beauty queen was found in the basement of her home on Christmas Day in 1996 shortly after her parents had reported her missing upon finding a ransom note demanding $118,000 in exchange for their daughter's life. Investigators reported Ramsey had been killed by asphyxiation due to strangulation and although DNA evidence was discovered, no one has ever been criminally prosecuted in the Ramsey case.

Beckner, the former Boulder, Colorado, police chief who led the investigation into the high-profile case is now retired from law enforcement and has largely managed to steer clear of the public spotlight after participating in an "Ask Me Anything" session for Reddit in February of 2015. Beckner later claimed to have regretted having participated in the session, where he claimed police had allegedly botched their initial investigation of the case by supposedly failing to properly secure the crime scene and immediately obtain separate statements from Ramsey's parents. Many of his responses were later deleted, although the thread was cached by The Denver Post here.

According to statements he made during his Q&A on Reddit, Beckner retired in April 2014 after serving as the chief of police for the Boulder Police Department for 16 years. He was appointed to the post two years after Ramsey was found dead. Following his retirement from the force, Beckner obtained a position as an adjunct instructor teaching online classes in criminal justice for Norwich University in Vermont. In 2015, Beckner told Reddit forum members (and readers) he was spending his retirement "giving back my experience and knowledge through teaching and consulting."

In an interview with local Boulder news website the Daily Camera, Beckner claimed he was toying with the idea of possibly writing a book about his 36 years in law enforcement. "If I write a book, it will not be specifically about the Ramsey case," he said. "Too many on that already. I might write an autobiography covering my entire career, of which the Ramsey case would be a part of."