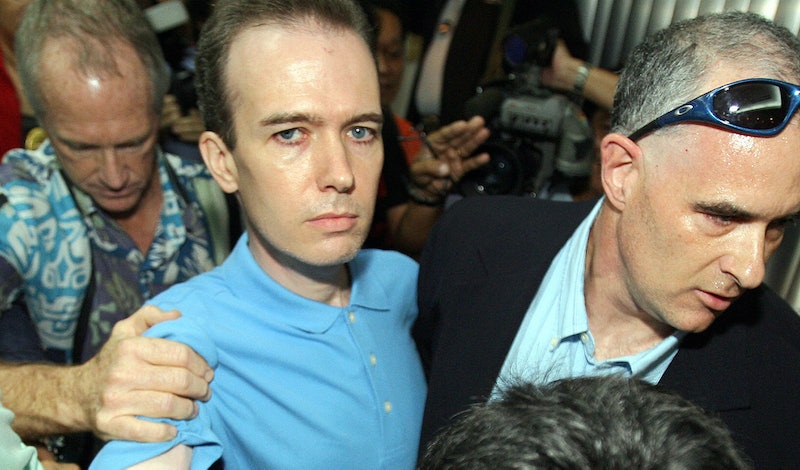 A decade ago, the world was first introduced to teacher John Mark Karr when he confessed to killing 6-year-old former beauty pageant queen JonBenet Ramsey in 1996. Back in 2006, Karr was in Thailand and arrested on child pornography charges. Karr later claimed to be the person of interest in the widely-covered Ramsey murder. However, DNA evidence exonerated him from the crime, and he was eventually let free. A decade later, and on the heels of four separate TV depictions of the Ramsey case, you may be wondering: Where is John Mark Karr now?

The last time Karr was in the headlines was in 2010, when The Daily Beast published an investigation into his recent activities. The piece alleged that Karr publicly identified as a woman from 2008 onwards, according to Seattle court records, and owned a Washington state drivers license under the name Delia Alexis Reich. Karr has not publicly addressed whether he is transgender.

In her investigative piece, Daily Beast reporter Diane Dimond recalled her correspondence with Karr, who falsely confessed to Ramsey's murder just years prior, when she reached out to him for any updates. Karr reportedly responded to her email, noting, "In 2006, I confessed to the whole world who I was... Do good for little boys and little girls."

Around the same period, 19-year-old Samantha Spiegel claimed on the Today show that she was Karr's former fiancé, and that Karr was allegedly leading a child sex cult operation known as "the Immaculates." Spiegel allegedly met Karr when she was nine and a student at the Convent of the Sacred Heart Catholic School in San Francisco, where Karr was a teacher's aide.

Fox reported that Spiegel and Karr reconnected in 2008. According to the report, once Spiegel's parents became aware of the situation, they sent her to rehab so she could get away from Karr's influence.

After being cleared of charges in the Ramsey case, Karr was arrested in Georgia at his parents' house in 2007 for a domestic argument. After Dimond reached out for a comment from Karr, Karr responded:

Do you make a difference in the lives of children with your research or do you only blast pedophiles and talk the rhetoric of the severe punishment they deserve? Aren't the children the matter at hand and not the pedophiles? Do you consider me a pedophile? You'd have to prove that with more than rumor. If you do accuse me of such, I deny the accusation emphatically.

Based on DNA evidence, Karr was categorically not involved in JonBenet's murder. Karr has not commented on the documentaries and renewed media interest surrounding the 20th anniversary of the murder.