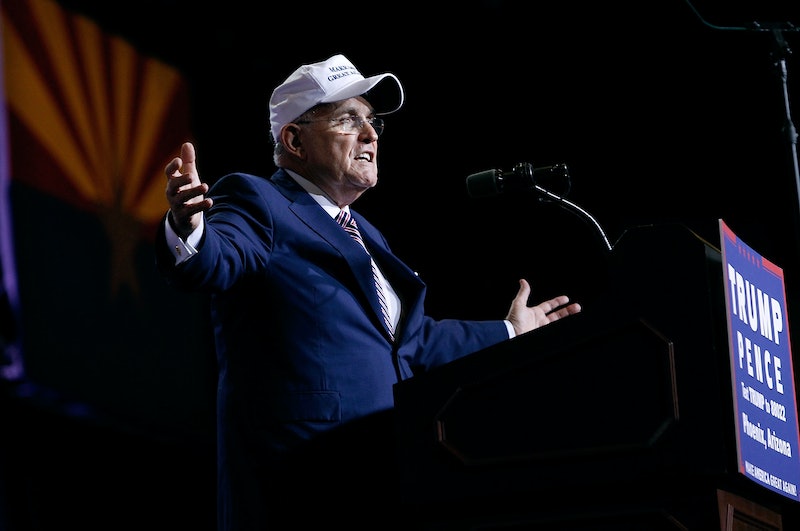 Of all the things Joe Biden has said during his time in public office, his comments about Rudy Giuliani during the 2008 Democratic primaries may turn out to have the most staying power. "There's only three things he mentions in a sentence," Biden said of Giuliani at a primary debate. "A noun, a verb, and 9/11." Biden was referring to Giuliani's frequent references to the attacks of Sept. 11, and the perception that Giuliani used the 9/11 attacks for political gain. Fifteen years later, not much as changed: Sept. 11 has been politicized throughout the 2016 campaign. Politicians in both parties are guilty of it, and — surprise — it comes off just as crass as it always has.

The most obvious case is Donald Trump. During the Republican primaries, Ted Cruz accused Trump of embodying "New York values," a thinly-veiled reference to some of Trump's more liberal positions on social issues. But it backfired: In one of the most effective moments of his campaign, Trump took Cruz's criticism and depicted it as an attack on the New Yorkers who rebuilt the city after Sept. 11.

"When the World Trade Center came down, I saw something that no place on earth could have handled more beautifully, more humanely than New York," Trump said. "The people in New York fought and fought and fought, and we saw more death, and even the smell of death — nobody understood it. And it was with us for months, the smell, the air. And we rebuilt downtown Manhattan, and everybody in the world watched. ... I have to tell you, that was a very insulting statement that Ted made."

Even Cruz applauded that line, and it was one of the only moments of the Trump campaign that — if you squint and don't think about it very much — was almost touching.

Sadly, Trump has also referenced Sept. 11 during this campaign in much less honorable terms. Indeed, some of Trump's 9/11 politicizations have been downright despicable. Throughout the campaign, he's trotted out the debunked claim that "thousands" of Muslims in New Jersey cheered the attacks of Sept. 11, and earlier in August, he suggested that his proposal to ban Muslims from entering the United States, were it in place in 2001, could have prevented the attacks.

Trump's not the only one to use the terrorist attack for political gain during this election. Prior to assuming his role as Trump's doormat, Chris Christie dabbled in 9/11 politicization. During several debates, he claimed to have been appointed to the U.S. attorneyship on Sept. 10, 2001, adding that "the world changed enormously the next day." (In fact, Christie wasn't nominated to serve as U.S. attorney until several weeks later.) In another debate moment, Rand Paul attacked Christie for hugging President Obama after Hurricane Sandy in 2012, prompting Christie to reply that "the hugs that I remember are the ones I gave to the families who lost their people on September 11.”

Neither has 9/11 politicization been reserved for Republicans. This year's Democratic National Convention featured a speech by Lauren Manning, a New Jersey woman who survived the attacks but sustained burns on 80 percent of her body. In her speech, Manning said that:

She [Clinton] walked into my hospital room and took my bandaged hand in her own. Our connection wasn't between a senator and her constituent. Our connection was person to person. She visited, called, and checked in for years, because she cared. When I needed her, she was there. When our first responders needed her, she was there. Now our country needs her.

And so on. Fifteen years later, the attacks of Sept. 11 remain one of the starkest illustrations of the fact that America, for all of its strengths, is not invulnerable. Especially amidst the recent wave of terror attacks in Paris, Brussels, Nice, and far too many other places, it is a devastating reminder that's become quite salient in the 2016 election. In that sense, it's not a surprise that politicians continue to find ways to use 9/11 as selling points for their own candidacies.

Nevertheless, it'a probably impossible to do this in a way that doesn't come off as tacky at best and insensitive at worst. When Giuliani suggested in 2007 that there could be a "new 9/11" if Democrats won the White House the next year, it didn't look good. When Christie used the attacks to bolster his own national security credentials a decade and a half later, it also didn't look good. Rarely, in fact, has politicizing 9/11 looked good; because It's a rhetorical ploy with few upsides, and it almost never works. If candidates for high office want to prove that they're fit for the job, they may want to mention Sept. 11 as sparingly as possible.