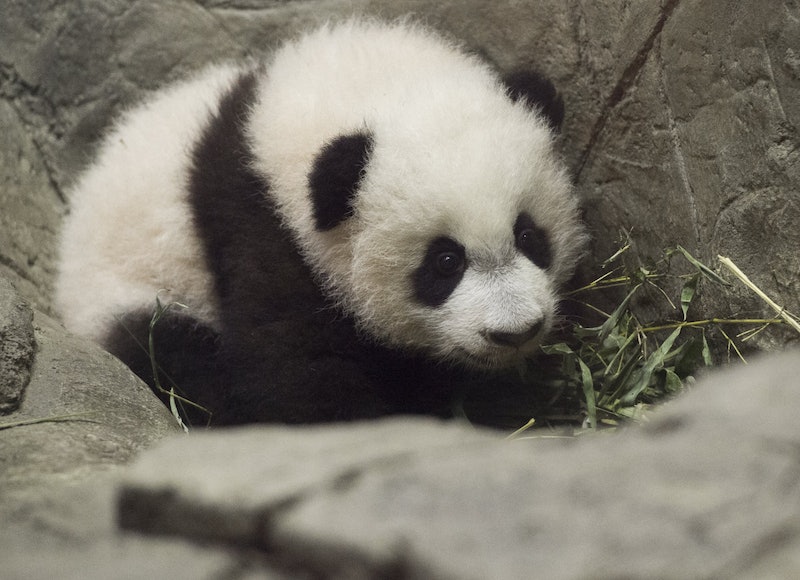 Panda lovers, rejoice! After more than 20 years of watching their fuzzy, bamboo-munching population dwindle, the International Union for Conservation of Nature (IUCN) has announced that giant pandas are no longer endangered, largely as a result of habitat conservation efforts and a decline in poaching. The announcement comes as part of an update to the IUCN's Red List, which identifies threatened species across the globe.

According to the IUCN's report, the panda population dropped to 1,216 individuals by 1988, and the species was listed as endangered in 1990. The number of pandas rose to nearly 1,600 by 2004, but scientists were unsure whether the increase was a fluke. The most recent survey, however, showed that the panda population reached 1,864 individuals in 2014 — a 17 percent increase since 2004. This led the IUCN to reclassify the panda as "vulnerable" rather than "endangered," noting that the Chinese government's conservation efforts were instrumental in increasing the species' population.

Pandas aren't out of the bamboo forest yet, so to speak — vulnerable species are still considered to face a high risk of extinction — but experts say the news is cause for celebration. "The recovery of the panda shows that when science, political will and engagement of local communities come together, we can save wildlife and also improve biodiversity," said Marco Lambertini, the World Wildlife Foundation (WWF) Director General, on the organization's website.

Unfortunately, the IUCN's announcement came with a warning: Giant pandas may start to disappear again within a few decades. This time, the population decline is likely to be brought about by climate change, which the organization predicts will eliminate more than 35 percent of the species' habitat over the next 80 years. Historically, habitat loss has been the most pressing threat to giant pandas; as the WWF points out, the animals subsist on a diet consisting almost entirely of bamboo — lots of it. When bamboo forests disappear, so does the panda's primary source of food.

"To protect this iconic species, it is critical that the effective forest protection measures are continued and that emerging threats are addressed," wrote the IUCN.

The bad news gets worse: Not every species is enjoying increased numbers. The IUCN also reported that the Eastern Gorilla has been moved to the "critically endangered" list, a single step away from extinction, after a population decline of more than 70 percent in the last 20 years. Now that the Eastern Gorilla has been reclassified, the majority of great ape species are on the brink of extinction. "Four of the six great apes — Eastern Gorilla, Western Gorilla, Bornean Orangutan and Sumatran Orangutan — are now listed as Critically Endangered, whilst the Chimpanzee and Bonobo are listed as Endangered," the IUCN pointed out.

It's depressing news, but if the rise of the panda population is anything to go by, the situation isn't hopeless. "Conservation action does work and we have increasing evidence of it," said IUCN Director General Inger Andersen. "It is our responsibility to enhance our efforts to turn the tide and protect the future of our planet."

More like this
5 Ways To Stand In Solidarity With Women In America From The UK
By Sophie McEvoy
How To Fight For Reproductive Rights, Based On How Much Time You Have
By Courtney Young
This Wi-Fi-Enabled Pet Feeder & Camera Gave Me Peace Of Mind On An Overnight Trip
By Danielle Calma
This Dog Food Is Not Only Super Healthy For Your Pup, It’s Also Better For The Planet
By A. Graham
Get Even More From Bustle — Sign Up For The Newsletter