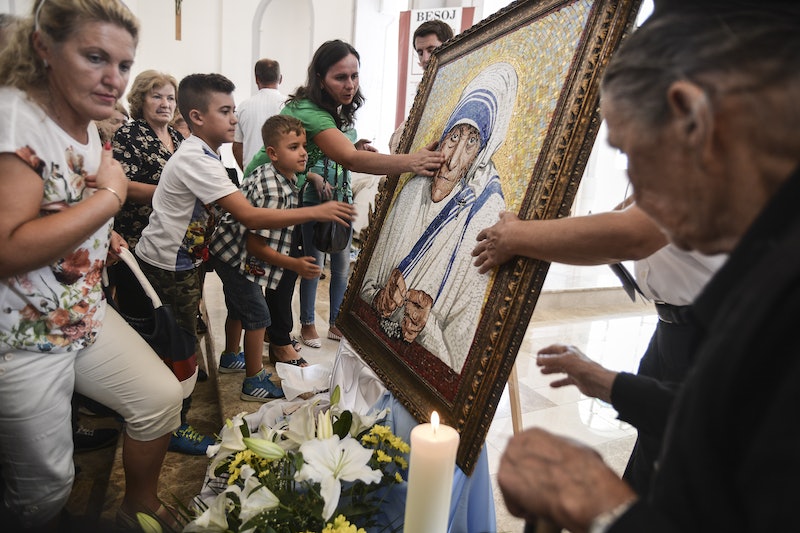 For many the canonization of Mother Teresa had long been inevitable. Known the world over as "the living saint," Mother Teresa was officially declared a saint Sept. 4 by Pope Francis in a canonization ceremony at St. Peter's Square in the Vatican. But although widely revered for her charitable works, an old controversy has marred Mother Teresa's entrance into sainthood as critics paint the nun as more self-serving than selfless servant.

Born Agnes Gonxha Bojaxhiu in 1910 in Skopje, Macedonia, Mother Teresa joined the Sisters of Loreto at the age of 18 and was teaching in Calcutta (now known as Kolkata), India, when she felt what she described as "the call within the call" to found the Order of the Missionaries of Charity in 1946 to care for Calcutta's "poorest of the poor." The order would become one of the most revered thanks to Mother Teresa's work with the poor, sick, and dying. "She bowed down before those who were spent, left to die on the side of the road, seeing in them their God-given dignity; she made her voice heard before the powers of this world, so that they might recognize their guilt for the crime of poverty they created," Pope Francis said of the Albanian nun during her canonization.

However, even figures as beloved as Mother Teresa are not without some controversy. The canonization of Mother Teresa has renewed old criticisms of the nun's charity, methods, and legacy along with those of the authenticity of the miracles her saintdom rests on.

Officially, it wasn't Mother Teresa's charitable contributions that ushered her into saintdom as sainthood is bestowed on those the Catholic Church says have been proven to perform miracles posthumously. According to the Church, the Albanian nun has cured a woman's cancerous tumor since her death at the age of 87 in 1997.

Much of the criticism surrounding Mother Teresa centers around claims she prioritized fame and proselytism before her charity work, glorified suffering rather than alleviated, and kept the company (and money) of dictators. Some detractors argue Mother Teresa provided inadequate medical care and unhygienic conditions to those taken in by her home for the dying. She has also come under criticism for her staunch opposition to contraception and abortion, which some claim exacerbated issues of homelessness and poverty in Calcutta.

Those who champion the legacy of Mother Teresa, however, say she brought hope to those who needed it most and should be honored for her willingness to act in the face of what many would view as hopelessness. For them, her canonization is a tribute long over due. Whether you think of her as a selfless servant of God or an attention-seeking promoter of poverty, it's impossible to deny that Mother Teresa left her mark on the world.