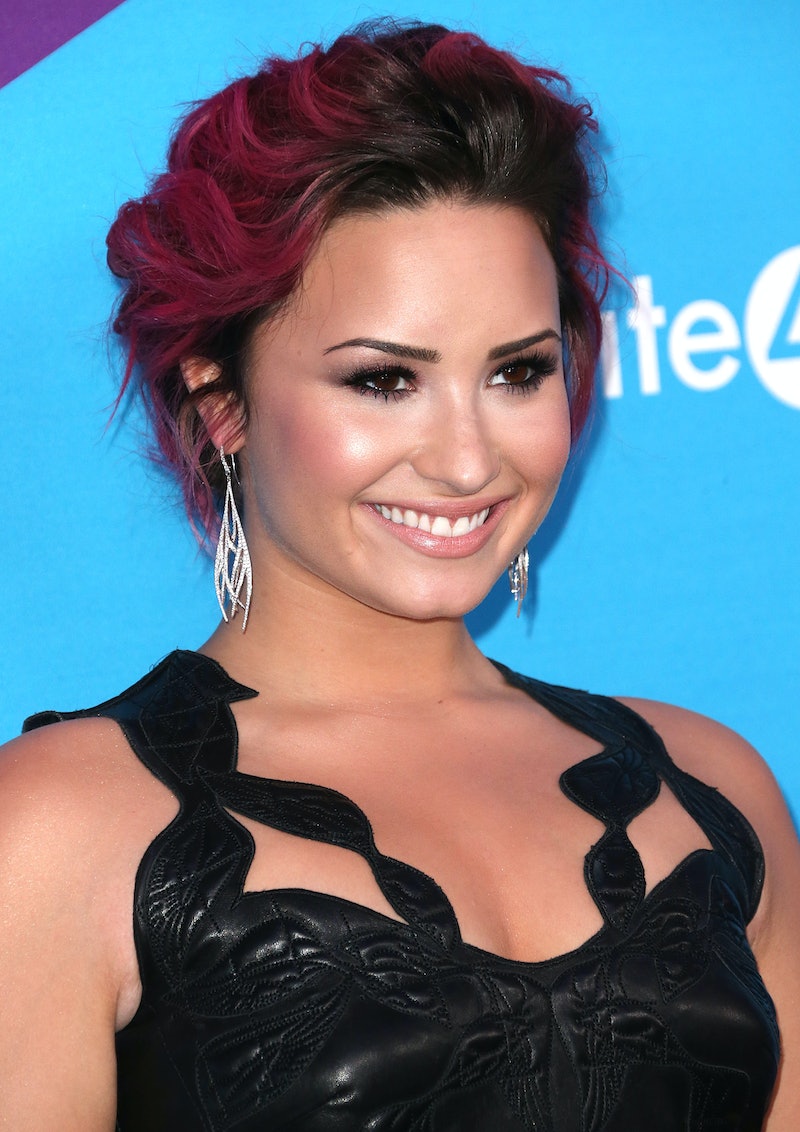 There's art, there's ARTPOP, and then there's vomit-art-pop, and not everybody likes that (because, um, it's vomit). Demi Lovato has spoken out against Lady Gaga's use of vomit in her recent performance at SXSW, claiming that it glorified eating disorders. Lovato is pretty outspoken when it comes to overcoming personal trauma; moreover, she's all about self-love, and vomit does not equal self-love.*

(*For some. Vomit artists love vomit.)

ICYMI, Gaga's concert featured vomit painter Millie Brown sticking her finger down her throat and vomiting on the ARTPOP star's chect. Lovato, who has not been shy it when comes to speaking outwardly about her previous struggles with eating disorders, was offended, claiming that the 'art vomit' glorified eating disorders. She wrote a message all about it, which said the following:

All I'm saying is, artists in pop culture have influence on people.. Some of which are people who aren't capable of understanding the art that is that is expressed by their idols. Young people who are struggling to figure out their identities are seriously influenced by the things they see their idols do. Whether we intend to or not, artists influence people of ALL ages and unfortunately what people see, people do. Hair, clothes and sometimes misinterpreting things, therefore using the excuse of art to engage in self-destructive behaviors. I've been through a shit ton.. More than any of you know, and I sympathize for everyone's struggle. But people emulate what they see celebrities do or let happen. And that's why I had to say something.. to let the people who don't understand the art in it, that bulimia isn't cool, and it won't get you on stage with your favorite artist. I can't NOT say anything because I stand up for what I believe in and speak out about mental illnesses. You're right, nobody asked my opinion but pop culture is a huge part in leading our generation, we have to continue to strive to change the world. No hate, no shade, just love.

Lovato is obviously deeply concerned for her young fans, many of whom (like Lovato herself), probably look to Gaga as a source of artistic inspiration. Fortunately, Lovato targeted this message at those younger fans who may have misinterpreted the performance art as a move to say make yourself throw up. Vomit art, weird as it may seem to some, is performance art, and part of being an artist is accepting that you will not agree with all forms of art (even though, vomit is...well, vomit-inducing, to say the least). To assume that Gaga herself was glorifying bulimia might be a bit off track, considering Gaga's Body Revolution encouraged an entire campaign of self-love and body acceptance. In fact, so much of Gaga's career has been about self-love.

However, Lovato obviously cares about her fans, and is aware that her audience is mostly comprised of young folk who may be like, "I want to try vomiting for the sake of art because somebody did it at Gaga's concert!" It's probably unlikely that a lot of her fans are going home and thinking that, but with celebrities' bodies constantly serving as the media's subjects, her concern makes sense.

But, as the end of Lovato's message says, she's all about love — love to her fans, love to Gaga, and that universal theme of self-love.

More like this
Demi Lovato Is Dating A Fellow Musician Who Is On A Sobriety Journey
By Grace Wehniainen
Demi Lovato Said Her Dream Music Collaboration Is Hayley Williams
By Grace Wehniainen
How Lady Gaga & Adele Are Closer To The EGOT All Of A Sudden
By Jake Viswanath
Lady Gaga Will Star In 'Joker: Folie À Deux' With Joaquin Phoenix
By Jake Viswanath
Get Even More From Bustle — Sign Up For The Newsletter