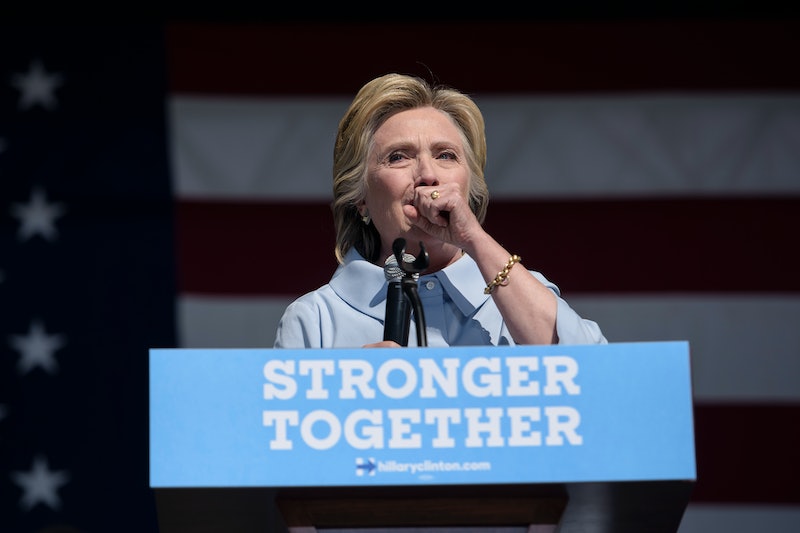 Something not so sweet was in the air in Ohio on Sept. 5, where Hillary Clinton blamed her cough on a Trump allergy. The Democratic presidential nominee suffered a coughing attack onstage in the middle of a Labor Day rally at Luke Easter Park in Cleveland, Ohio. (Ohio is a major battleground state for the election.) After trying and largely failing to collect her speaking voice, Clinton said that she was suffering from an anaphylactic reaction to her opponent. "Every time I think about Trump, I get allergic," she joked in a hoarse voice.

Aides later blamed the coughing on a high amount of pollen, to which Clinton has a known allergy. In a letter published last summer by her personal physician, Dr. Lisa Bardack, it was noted that Clinton suffers from "seasonal pollen allergies," so it isn't much of a surprise that they flared up during a particularly severe allergen day. The pollen count in Cleveland that day was on the high end of the scale, measuring at a 8.9 out of 12 on the index, according to Pollen.com.

The funny move to antagonize Trump was well-played on Clinton's part, as she's currently seeing a potential lag in the polls. CNN published a poll Tuesday that showed Trump out ahead of Clinton by two percentage points with likely voters and a net gain of five points among registered voters since the last round of polling. Real Clear Politics still has Clinton beating Trump by about two points in an aggregation of recent polls, but if CNN's poll reflects a growing trend, Clinton could be in trouble leading up to the election.

CNN's poll factored in third-party candidates Jill Stein and Gary Johnson, whose national viability is still widely questioned. According to the Green and Libertarian parties, the candidates are currently on the ballot in 42 and 47 states, respectively, and Johnson has said that if he doesn't make it to the debate stage, his race is over. They may not be as significant as entities closer to the election, meaning the poll's predictive accuracy could be lowered.

The coughing fit for Clinton is both a good thing and a bad thing. She's been largely MIA from the media recently, making limited appearances in favor of fundraising privately, even though she's needed the public exposure. She parlayed the cough into a joke skillfully, but it still subtly inflamed the persistent rumors about her health once again. To fight back from the declining polls performances and nasty rumors, Clinton is marching ahead with her scheduled events, including a rally in Tampa, Florida on Sept. 6, and the first-ever Commander In Chief Summit in New York City on Sept. 7.