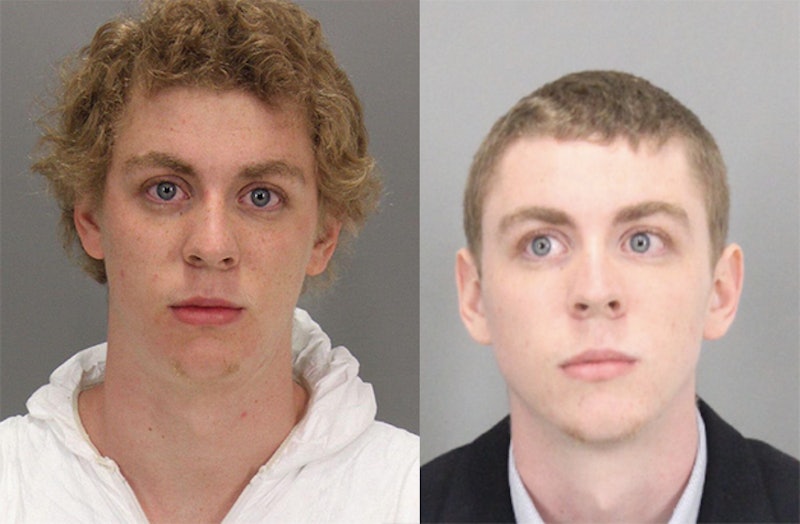 Last week, one of the most infamous sexual assailants in all of the United States was released from jail in Santa Clara county, California, having served just three months for his crime. Brock Turner was set free in the early morning hours of Friday, Sept. 2, and he didn't stick around for long, heading back to his home state of Ohio. And now, he's encountered the last and final punishment. Turner has registered as a sex offender, fulfilling the final and most permanent punishment he'll ever receive for his sexual assault conviction.

Turner, 22, was convicted of three charges: assault with intent to rape an intoxicated woman, sexually penetrating an intoxicated person with a foreign object, and sexually penetrating an unconscious person with a foreign object. Under California's controversial definition, none of these charges actually qualified as acts of rape, although that may change pending the signature of a new bill by Governor Jerry Brown.

Despite the prosecution seeking six years of prison time for Turner, Judge Aaron Persky sentenced Turner to a mere six months. Thanks to his "good behavior" while in jail, Turner was set free early, serving just three months for his violations.

His status as a registered sex offender, however, is something Turner is not going to be able to ever escape, barring any future changes to the law. As it stands now, Turner faces restrictions on where he can live, requirements on informing his community of his presence, and a raft of further information he must provide to law enforcement. Here are the basic facts, as Ellie Kaufman, Jason Hanna, and Emanuella Grinberg helpfully detailed for CNN on Tuesday:

In short, while none of this is likely to quell the outrage about the extremely short sentence Turner was made to serve ― a sentence Judge Persky is paying for through a robust movement aiming to have him ousted ― it is true that his life going forward will look very, very different than it once did, back before he decided to sexually assault an unconscious woman behind a dumpster, a crime his father callously characterized to the Santa Clara court as "20 minutes of action."

In short, it may not be the sort of justice that the nature of his crime deserved, and that countless activists, advocates, and observers had hoped for. But make no mistake: even though he's no longer sitting in a jail cell, his entry into the sex offender registry means Turner will never get away free and clear.